Last Friday, 17 January 2014, President Obama secretly contacted us for information about the number of Americans who might be impacted by a significant increase in the U.S. federal minimum wage.

Really. Our friends at the NSA tipped us off to the visit and here's the screen shot of our site traffic log of the President's inquiry:

Specifically, President Obama was interested in our work where we estimated the income distribution of U.S. hourly workers using data originally published by the Congressional Budget Office in 2006.

So he got numbers, but numbers that applied before the last series of increases in the U.S. federal minimum wage. Numbers we later used to show that lots of jobs within the range of incomes affected by the minimum wage increase of 2007 disappeared from the economy. Before the last recession.

Alas, they are also old numbers. And as a source of vital information more trusted by the Executive Office of the President than say the New York Times or government bureaucrats, we thought we'd take this opportunity to update them somewhat. Our chart below shows what we found when we tapped the U.S. Census Bureau's most current data available on the distribution of wage and salary income earned by Americans in 2012 (as the data for 2013 won't be collected until this upcoming March, nor will it be available to the public until September.) 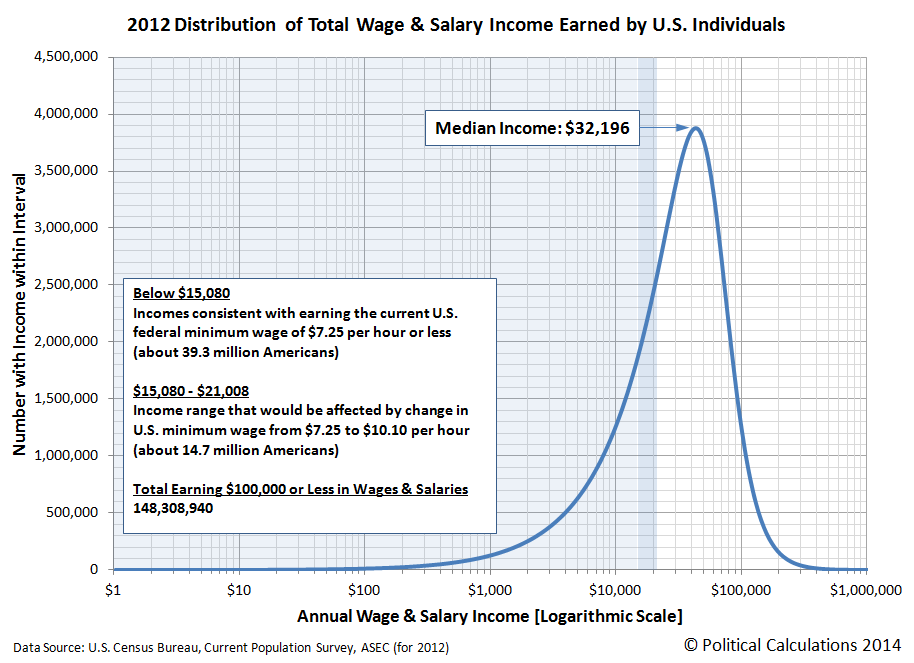 There are two key thresholds shown in this chart. The first is at $15,080, which corresponds to the annual income that an individual who earned the U.S. federal minimum wage might earn if they worked full-time, 40 hours per week, all year long. Americans who fall below this level today are predominantly those who work fewer than 40 hours per week or who work fewer than 52 weeks per year. That's approximately 39.3 million Americans.

The next threshold is at $21,008, which corresponds to the annual income that an individual who earns an hourly wage equal to $10.10 per hour might earn if they worked 40 hours per week, 52 weeks per year. In 2012, there were approximately 14.7 million Americans who earned wages or salaries with an equivalent full-time hourly wage of greater that $7.25 per hour, but less than or equal to $10.10 per hour.

As we indicated yesterday, approximately half of these individuals are between the ages of 16 and 24. Which is a shame, because it sure would be nice if they could earn just a little bit of money through a job so they don't have to rack up quite so much student loan debt.

But then, that's a very profitable racket for Uncle Sam, which is one reason why President Obama may have chosen to sign off on this particular nudge. They'll just need that college education to be considered for the new higher minimum wage jobs that don't even really require a college degree.