What would cause the Federal Reserve to back off its plan to progressively reduce its purchases of U.S. Treasuries and Mortgage Backed Securities that make up its current Quantitative Easing (QE) economic stimulus efforts?

At the simplest level, it should be if the U.S. economy's growth performance falls too far below the level that the Fed forecasts, which ideally should match its targets for economic growth. That would be the clearest indication that the Fed's established policies are not sufficiently facilitating the nation's economic growth by its own standards.

While the Fed should use nominal GDP growth targets in doing this, which would allow it more easily meet its dual mandate of promoting price stability and full employment in the United States, we know that the Fed has instead been targeting the inflation component of nominal GDP growth separately.

The problem is that in focusing primarily upon inflation, the Fed risks having nominal economic growth fall too low as its monetary policies may not provide enough stimulative impact to promote real economic growth.

We can see that play out as we compare forecasts of real economic growth, as provided by our Modified Limo forecasting technique, with real GDP growth in recent years. The chart below does that, also showing when the Fed initiated its various Quantitative Easing programs. 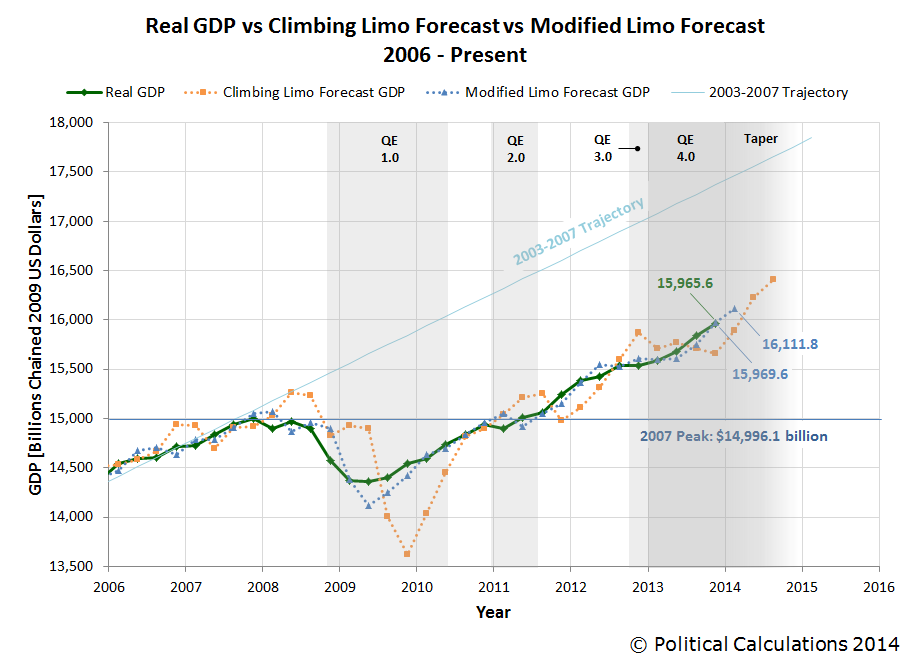 The figure indicated for real GDP in 2013-Q4 is based upon the Bureau of Economic Analysis' first estimate for this value. The BEA will revise this figure at least twice more - once in February and again in March 2014.

Examining the chart, we see that since 2007, whenever real GDP has fallen below the Modified Limo forecast value, the Fed has had to initiate new or increased levels of QE.

Which is really cool to see, because that perhaps gives us a new tool for anticipating how the Fed will manage its QE efforts going forward! If we see real GDP fall significantly below the forecast level, it might be a good predictor that the Fed might soon suspend or perhaps even reverse its QE tapering plans.