Political Calculations
Unexpectedly Intriguing!
February 28, 2014
The Value of Winning the Oscar for Best Picture Versus Not Winning

How much does winning the Academy Award for Best Picture matter for DVD sales?

If you think about it, the annual televised Oscars ceremony is really little more than a four-hour-or-more-long commercial for the DVD of the movie that "wins" the "Best Picture" category. But we wondered how much that really matters for the movies' DVD sales.

To find out, we need to compare the DVD sales of a "Best Picture" winner with the DVD sales of a "Best Picture" nominee during the first several weeks after they go on sale to the public - ideally with the Oscars telecast occurring within just a few weeks of their DVD release. And really ideally, Best Picture contenders that have nearly identical sales during those first weeks of their release, except perhaps for the weeks immediately following the Oscars telecast. 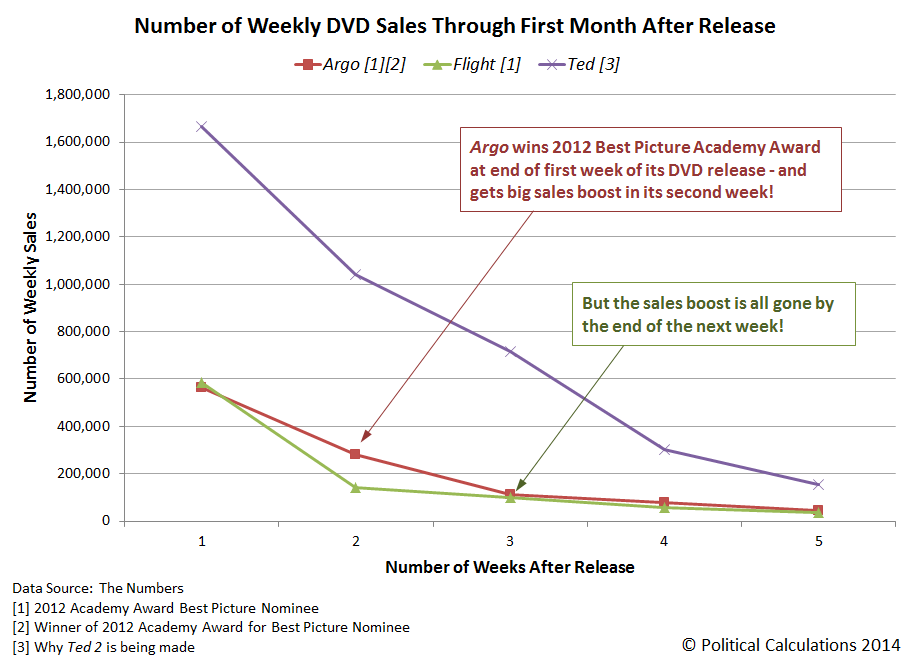 In this chart, we see that the weekly DVD sales for both Flight and Argo are virtually identical for every week of their release except for one - the second week of DVD sales for Argo were double those of Flight, corresponding to the week immediately after it won the Academy Award for Best Picture of 2012.

For Argo, that meant that winning the Best Picture Oscar equated to an extra 142,665 more sales than it would have had that week if it hadn't won the Oscar. And at an average sales price of $14.97 that week, Argo's DVD sales grossed an additional $2,135,546 more than it likely would have for the movie's makers and distributors.

Notice also that there's almost no difference between Flight's and Argo's weekly DVD sales for all the other weeks of their DVD sales - their numbers are only meaningfully different for the week following when Argo won for Best Picture.

That makes the Academy Awards a four-hour-or-more-long commercial whose advertising impact on DVD sales only lasts for about a week. And it's only effective for the winner of the Best Picture Oscar, because Best Picture nominee Flight didn't see any meaningful bump in its corresponding third week DVD sales, which came right after the Oscars telecast.

But if nothing else, we hope our chart explains why Hollywood is now busy making Ted 2. Without good movies featuring talking bears like the original Ted, they just wouldn't be able to afford to make as nearly as many critical "successes" otherwise!