Political Calculations
Unexpectedly Intriguing!
27 February 2014
The Volatility of Income for the One Percent

Last December, the IRS released the latest update to their annual tax return statistics to now cover the 2011 tax year. We thought it would be interesting to look at the threshold income that a typical American taxpayer would need to have earned to be included among the Top 50%, the Top 1% and the stratospheric Top 0.1% according to the IRS over the preceding 10 years [1]: 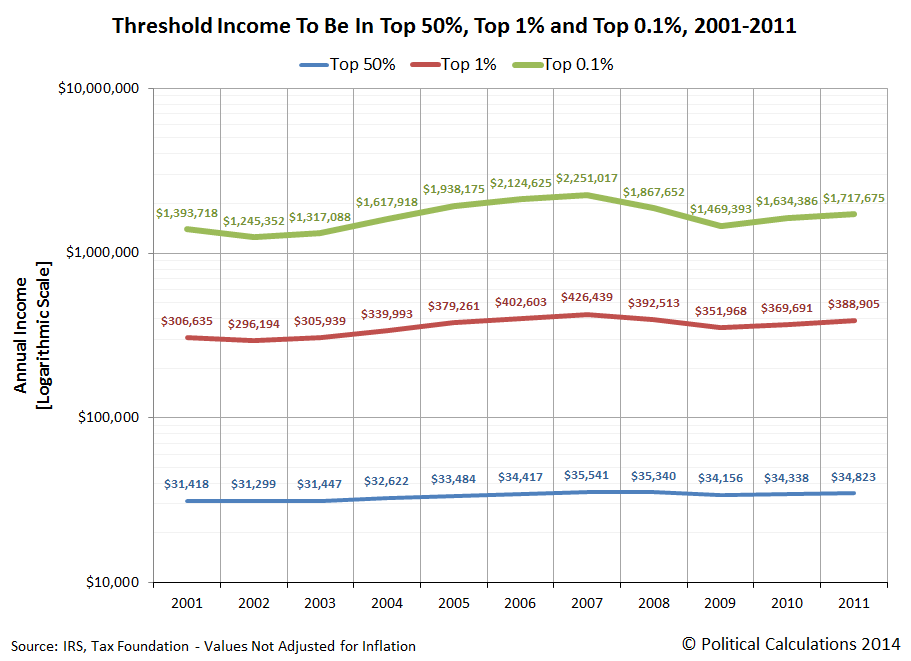 In the chart, we've shown the threshold incomes on a logarithmic scale (be sure to read Jim Hamilton's invaluable explanation for why we would choose to do this!)

Two things really stand out in what we observe in the data from 2001 through 2011:

Our next chart underscores our second observation - we simply calculated the percent change from the previous years threshold income to be in the Top 50%, the Top 1% or the Top 0.1%: Now, ask yourself a question: Could you afford to go through a year where your income might drop by 20% or more from the previous year?

The answer likely depends on how much you might have been counting on having the same kind of income you did in the previous year. For the individuals who actually earned incomes that put them in the Top 0.1% [2], the answer is probably not too bad, because if they stayed in the Top 0.1%, they were still earning a significant amount of income.

But that kind of income volatility from year to year is potentially catastrophic for their two biggest financial dependents: the federal government and potentially their state government, where the reliance upon extremely progressive income tax rates imposed upon high income earners for their revenue would virtually ensure that they will face a major fiscal crisis if the millionaires and billionaires included in these top ranks have a really bad year.

[2] While there's certainly some overlap from year to year, the actual people whose earned income puts them in the Top 1% and especially the Top 0.1% is not consistent from year to year - there's a lot of turnover at these income levels.