According to the Associated Press, the typical Chief Executive Officer of a company makes 257 times the average worker's salary.

Is that really a problem?

Here's why we ask that question - how much somebody earns in doing a job depends tremendously on who else can do their job. For example, people who earn the minimum wage tend to have minimal job responsibilities. Consider the case of Tyree Johnson, a 20-year McDonalds employee:

After 20 years cooking burgers and manning the fryer for the national chain, Tyree Johnson still makes just the minimum wage, Bloomberg reports. That's $8.25 an hour in 44-year-old Johnson's hometown of Chicago, where he works at two different McDonald's restaurants.

First, let's look at what it would take to replace Tyree Johnson as a fry cook at McDonalds. Here's a recollection of a St. Louis McDonalds' crew member's experience in being hired and trained:

I applied in-person and the process took a day - interviewed at McDonald's in March 2013.

Interview Details – The interview process took less than 15 minutes. It wasn't really thorough or relevant. Once hired, you go through a two day training period. It was a group interview and not hard at all.

Negotiation Details – You got to choose the hours you worked and they attempted to make a flexible schedule. 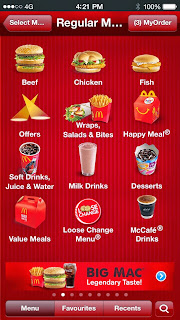 Of course, one of the big reasons that so little training is needed is because McDonalds invests heavily in automating many aspects of restaurant work, with the position of cashier likely to be the next job at McDonalds that will make more sense to have done by technology rather than by people. As a business, McDonalds does not rely upon employing workers at minimal wages for its profits, as it long ago recognized that standardizing and automating work was its key to growth. Consequently, McDonalds employees earn wages consistent with those who might replace them in their very limited roles.

In 2012, McDonald's CEO Jim Skinner earned $8.75 million. He retired and was replaced by Don Thompson in June 2012, who had joined McDonalds 22 years earlier, leading projects to design and develop robotic equipment for food transport and control circuits for automating cooking operations at McDonalds' 34,000+ restaurants worldwide. Thompson had been being groomed to become McDonald's CEO since being promoted to be the company's Chief Operating Officer in June 2010. In 2013, Thompson earned $9.5 million as CEO.

We're making a point of emphasizing the sheer scope of McDonalds' operations because that's the key to understanding what drives the pay of CEOs.

Xavier Gabaix and Augustin Landier found back in 2008 (using data up through 2003) that CEO pay follows a special version of a power law, known as Zipf's Law, where what a major company's CEO earns is directly proportional to the size of the firm that they are responsible for running. The chart below shows the correlation between firm size and CEO compensation for the top 500 public firms in 2010: 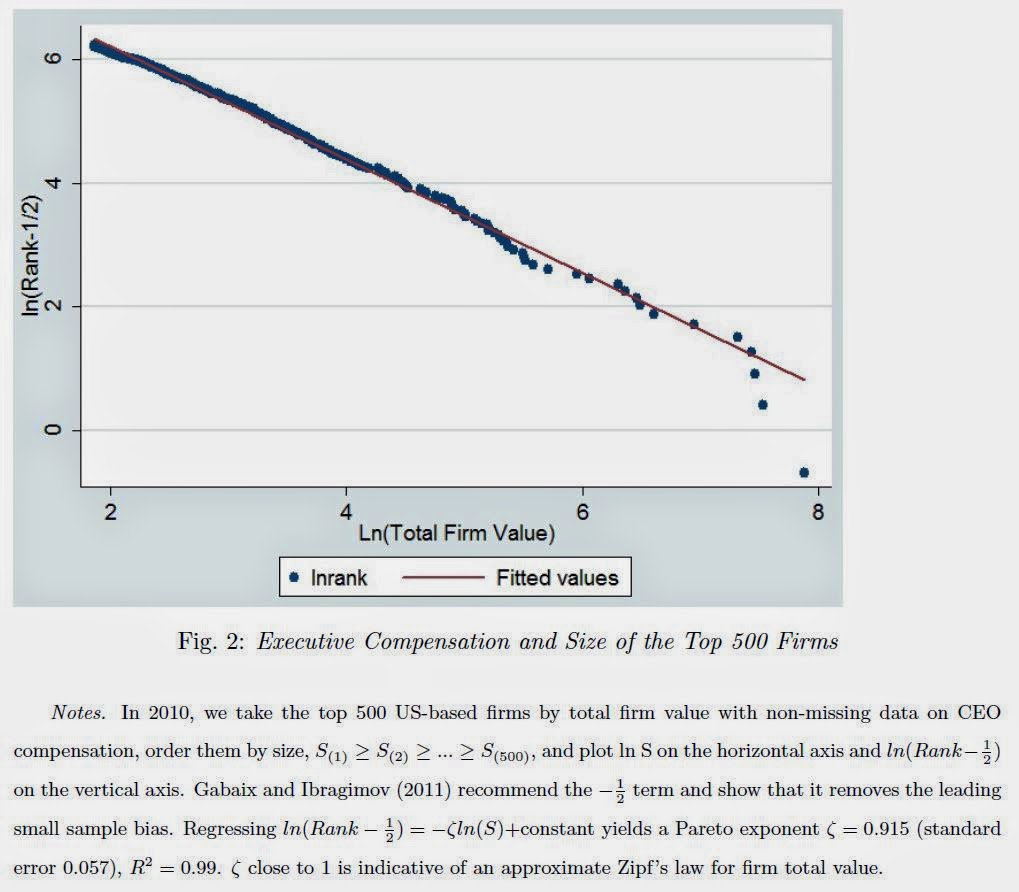 But more importantly, Gabaix and Landier have updated their earlier results to include data through 2011, allowing them to determine whether the relationship between firm size and CEO compensation would hold through the extreme gyrations the economy experienced in going from boom, to bust and then into recovery. Here's the abstract of their 2013 paper updating their findings:

In the 'size of stakes' view quantitatively formalised in Gabaix and Landier (2008), CEO compensation reflects the size of firms affected by talent in a competitive market. The years 2004-2011 were not part of the initial study and offer a laboratory to examine the theory with new positive and negative shocks. Executive compensation (measured ex ante) did closely track the evolution of average firm value, supporting the 'size of stakes' view out of sample. During 2007 - 2009, firm value decreased by 17%, and CEO pay by 28%. During 2009-2011, firm value increased by 19% and CEO pay by 22%.

We see then that CEO pay is indeed driven by firm size. 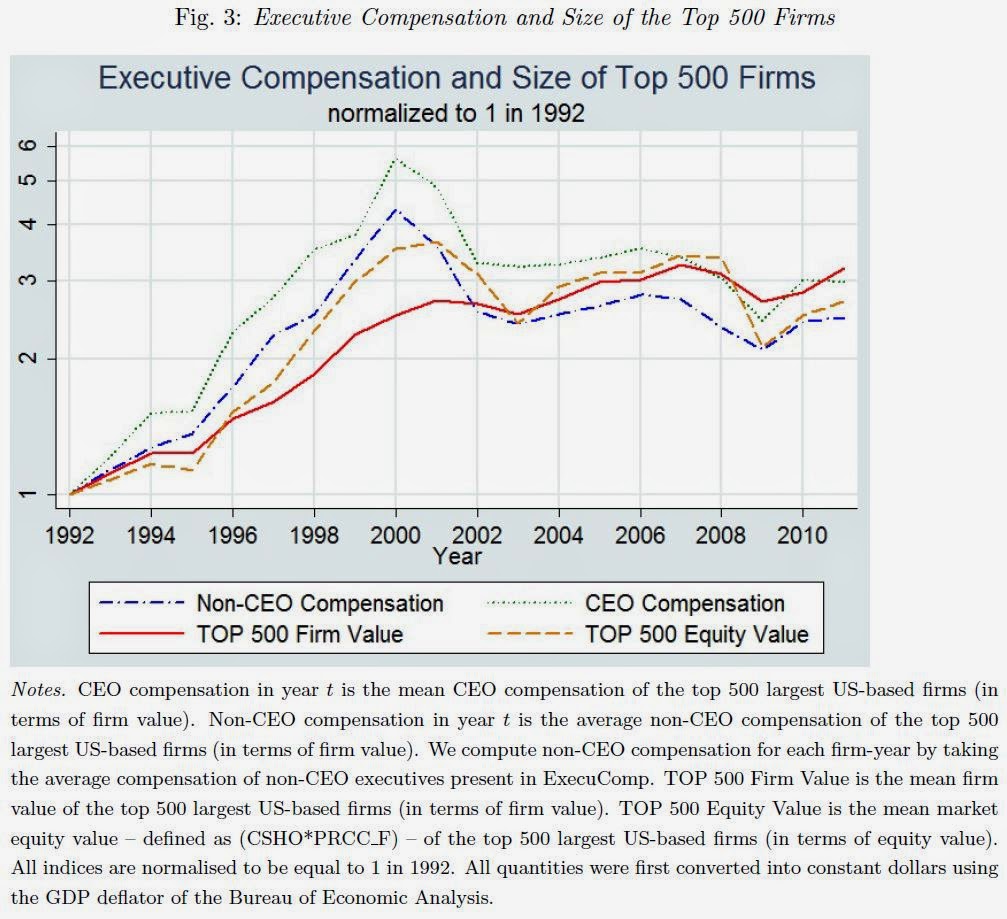 In fact, the only time we see CEO compensation race far above what we would expect based upon firm size directly corresponds to the years of the Dot-Com Bubble, where a reduction in the capital gains tax rate without a corresponding reduction in dividend tax rates created massive distortionary imbalances in the U.S. economy. Imbalances, we might add, affected people earning minimum wages by just as much as those who pocketed that era's massive capital gains.

And for those people whose pay is determined by the wages that would be paid to their potential replacement, perhaps a good question to ask is what can you do to generate enough additional revenue to justify a higher paycheck for yourself without passing the costs on to your customers. Because the odds are that the CEO of the company where you work already has some idea of what that answer might be.

And you know that they've just gotta be loving it!

Political Calculations. What Caused the Dot Com Bubble to Begin and What Caused It to End? http://politicalcalculations.blogspot.com/2010/12/what-caused-dot-com-bubble-to-begin-and.html. 15 December 2010.