Political Calculations
Unexpectedly Intriguing!
21 May 2014
What "Reverting to the Mean" Means

What does it mean to say that stock prices will "revert to their mean"?

After all, aren't stock prices supposed to be random? And if they are really random, how on earth could they be following any sort of stable trend for any length of time, whose mean trajectory they might periodically revert back to as time goes by?

And yet, if we look at a long enough period of time, say 22+ years, we find that stock prices would appear to follow definite trends for up to years at a time. Even as they seem to bounce about randomly about these trends as they follow them. 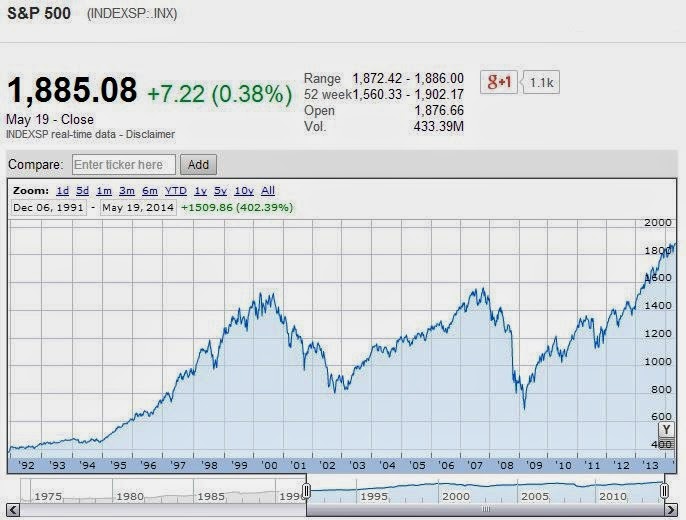 Now here's where it gets interesting. From this chart, it's really tempting to start drawing lines where you see trends to try to define them. And in fact, there's a whole field within investing and finance that's dedicated to the practice called technical analysis, where its practicioners seek to identify trends as they progress over time to make investment decisions.

Technical analysis, as it's generally practiced, has a critical flaw. When one charts stock price trends over time, the effect is to treat stock prices as if they are a function of time.

That we do not see that tells us that some other factor is the primary driver of stock prices. Our next chart shows what we've identified that factor to be and its relationship with stock prices during the major relative periods of order in the stock market since December 1991: 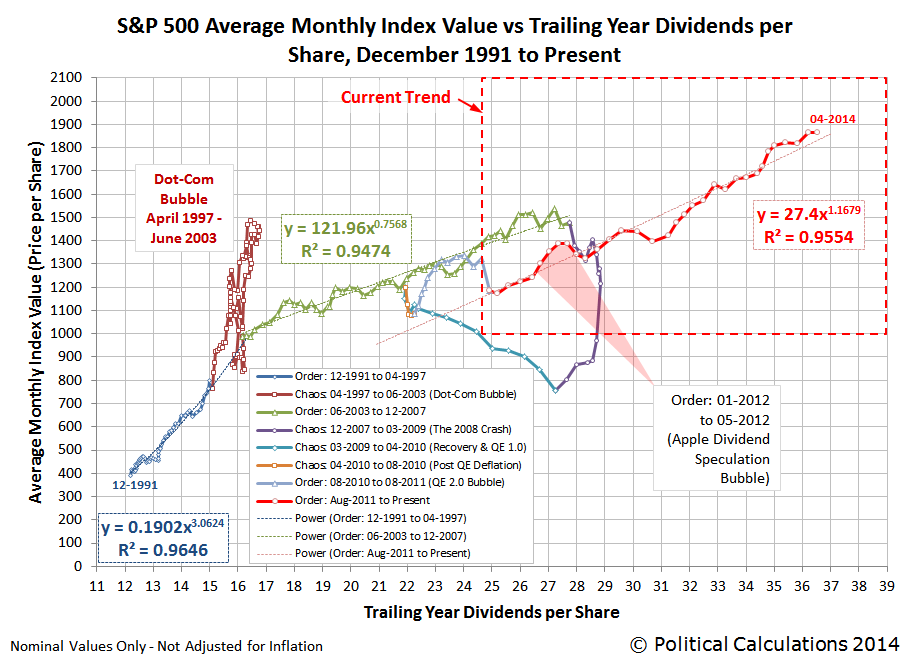 This chart is an updated version of the one that originally marked one of our original discoveries - the extent to which stock prices and dividends are correlated - particularly during the trends that define relative periods of order in the stock market. Periods of order, we might add, that are punctuated by periods of chaos.

The thing to take away from this chart however is the relationship shown between stock prices and their underlying trailing year dividends per share. That definition allows us to do something that technical analysts can only dream of - to map out the trends about which stock prices might actually revert!

Even better, we can apply the tools of statistical analysis to do that job, as one of the other things we've discovered is that during relative periods of order in the stock market, the variation of stock prices about the trends we've mapped would appear to follow a normal distribution. Or more accurately, during these periods, we cannot reject the statistical hypothesis that stock prices behave "normally". (As you can see in the chart above though, those rules don't apply during relative periods of chaos in the stock market!)

So what does that have to do with the potential for mean reversion? Well, if we apply our tools, we can see where stock prices currently are with respect to their established mean trajectory during relative periods of order. At present, and really, since 4 August 2011, we find that the U.S. stock market has been in what we would describe as a relative period of order: 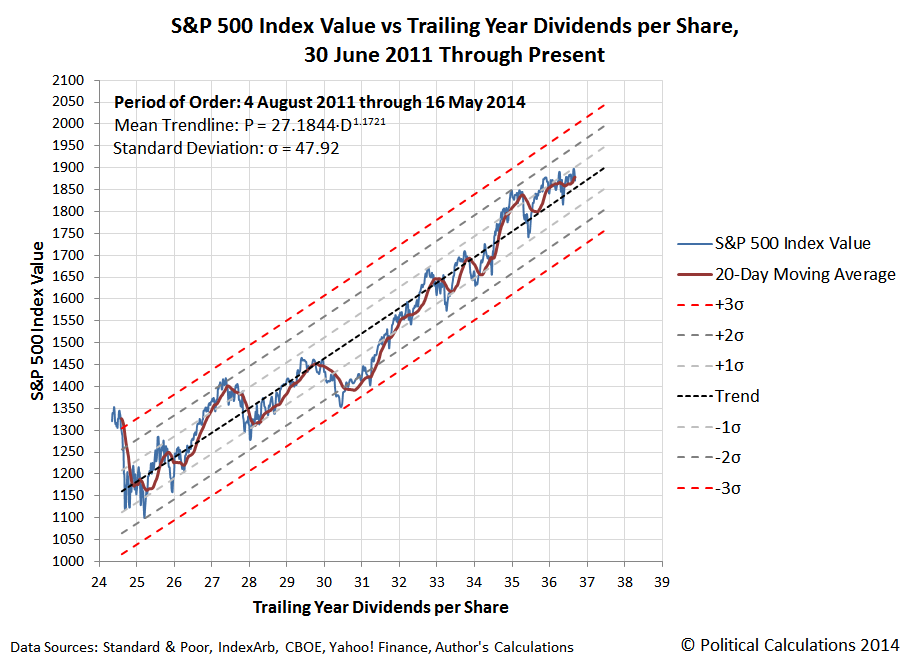 By definition, when following a trend, stock prices will be above their established trend about 50% of the time and below it 50% of the time. In looking at the chart above, we see that stock prices have been above their established trend for quite a while now, which is a pretty significant factor behind why a number of market observers are increasingly anxious over why we haven't seen a significant correction for so long.

Even if they can't quite put their finger on why.

It would certainly help to know the future to sort out how a reversion to the mean would play out, wouldn't it? Fortunately for you, that's where we work, so how about we give you a general idea of how and when the phenomenon of mean reversion will play out, assuming no noise events interfere with the schedule for the future? Say, in our next installment, where we'll apply the tools we've invented to cope with the market during periods of chaos!