We thought we'd tackle the numbers behind the Department of Veterans Affairs' medical care rationing scandal for the sake of answering a number of questions that have been raised about it since the news of the scandal broke wide in recent weeks.

Here, news reports first suggested, then an Inspector General's report confirmed, that the wait lists at a number of VA facilities were being manipulated for the purpose of concealing the true backlog of military veterans seeking the "free" government-provided medical care available to them through the Veterans Health Administration.

Of course, such care isn't really free. So the first question that needs to be answered is "Was the VA getting enough money to meet the needs of the veterans seeking medical care through its facilities?"

Our first chart shows both how much the VA's spending has changed from 2003 through 2013, while also illustrating the major categories into which the Department's expenditures have gone to support: 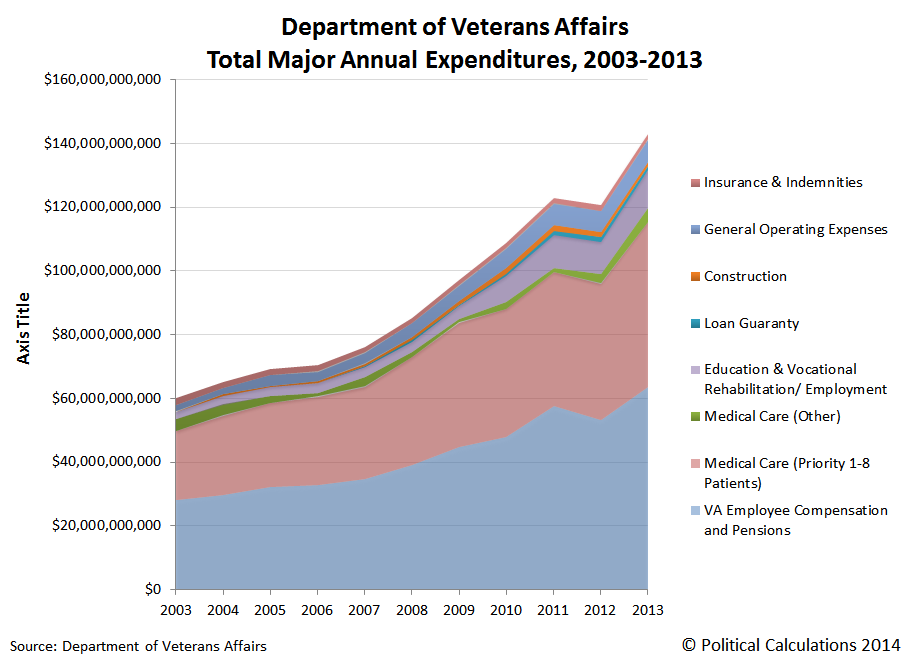 We'll next "unstack" the spending by major category shown in this chart to identify which grew the most in the period since 2003. 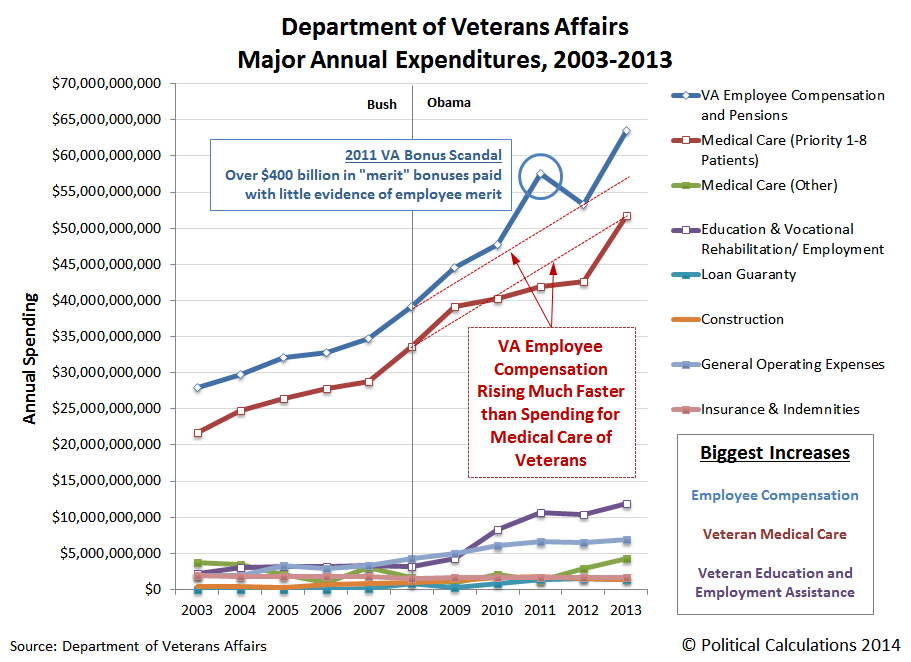 Here, we find that the VA's spending for the compensation and pensions of its employees have grown the most since 2003, followed by spending on the medical services consumed by veterans who successfully obtained care from the VA, and then followed in a distant third place by spending to support education and vocational job training programs for U.S. veterans.

But beyond that, we find that the spending to support the pay, bonuses and pensions of VA employees has grown considerably faster than that to provide medical care to veterans - particularly in the period since 2008, which corresponds to President Obama's tenure in office.

The effect of the scandal was such that VA administrators and others who benefited from the lavish outpouring of bonuses in 2011 were denied bonuses in 2012, causing the amount of compensation and pensions paid to VA employees to dip in that year.

As you can see next, the compensation and pensions of VA employees surged to new highs in 2013. This increase corresponds to the re-establishment of the VA's employee bonus programs in 2013, this time based on the false merit of their having "successfully" met President Obama's goal of reducing the backlog and wait times for veterans seeking medical care.

Before continuing, let's next look at the percentage share that each of the VA's major categories of spending have taken up in its annual budgets from 2003 through 2013 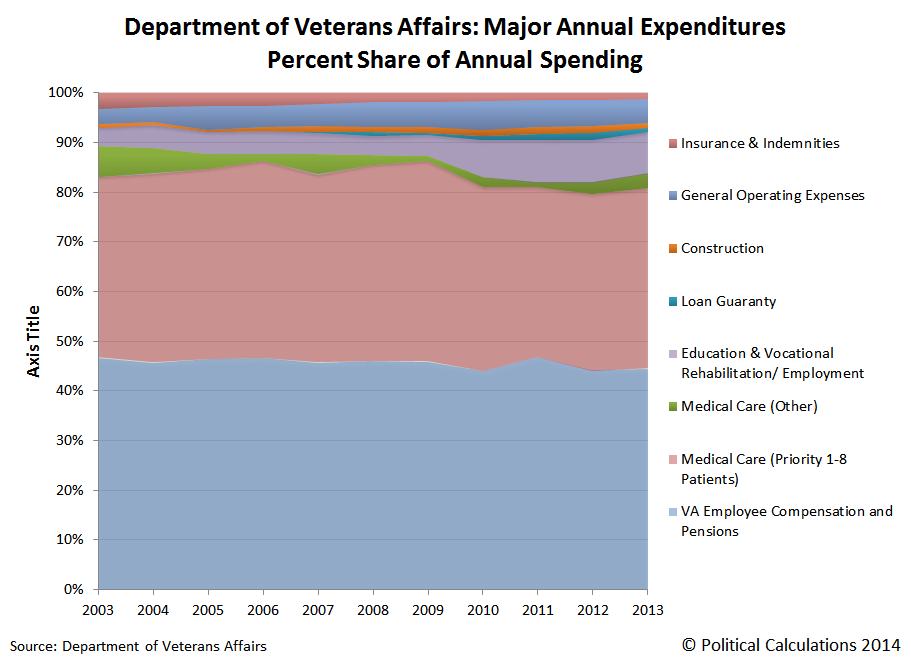 What this chart does is give us some idea of the relative "competition" there is within the Department of Veterans Affairs annual budget for each of the major categories of its expenditures. Since we've already established that the VA's expenditures for its employees' compensation and pensions represents its fastest growing expenditure category over time, and especially since 2008, this chart gives us an idea of the other categories that are being sacrificed to support the apparent top priority of the VA's administrators within the Department's allocated budget.

That top priority would appear to be maintaining the relative percentage share of employee compensation and pensions somewhere within the range of 44% and 46% of the Department of Veterans Affairs' total annual budget. Meeting that priority comes at the price of rationed medical care for U.S. veterans, large numbers of whom are effectively being denied care as a result.

Our next chart considers another question central to the VA's rationed care wait list scandal: "Does the VA have adequate staff to meet the needs of veterans seeking medical care?" 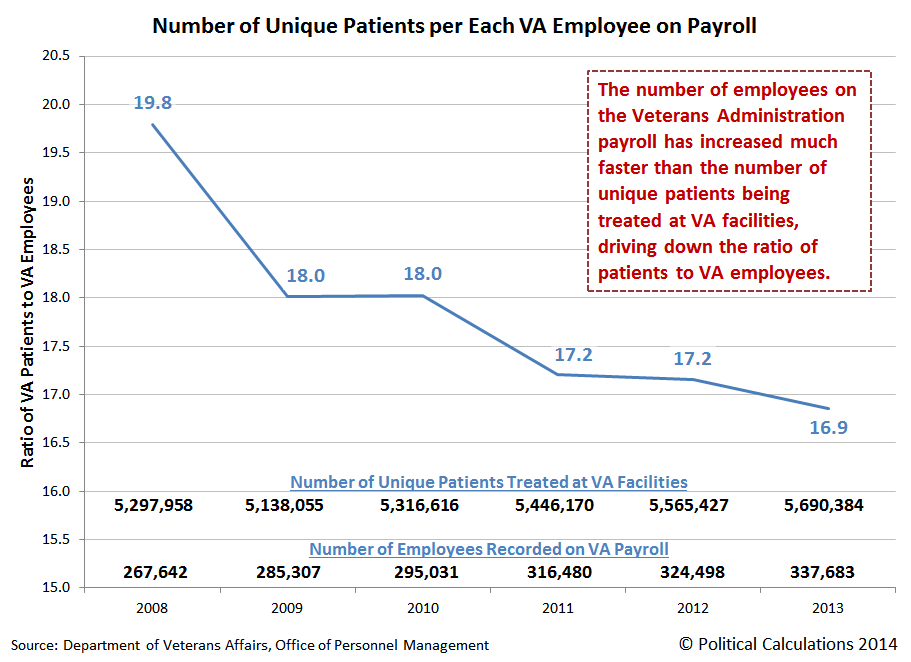 Looking just at the period since 2008, we find that the ratio of unique patients being treated at VA facilities and the number of people recorded on the VA's payrolls in each year has been falling, from nearly 20-to-1 in 2008 to under 17-to-1 in 2013.

In theory, one might believe that this would represent improving conditions of care for patients, much the way that some people believe that smaller class sizes benefit student learning in public schools. In reality, what this represents is a reduction in the efforts being put forth by the VA's employees, who have become increasingly less productive as their numbers have increased in recent years.

Meanwhile, our next chart considers how the compensation and pensions per VA employee and the amount of spending on medical care per unique patient at VA facilities has changed over the same period of time. 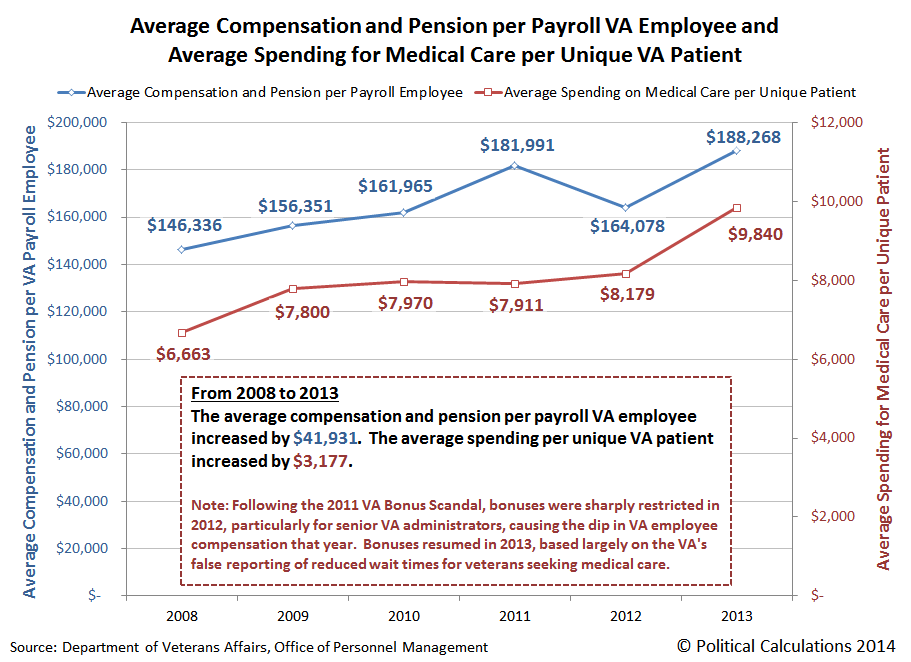 In raw numbers, the spending on medical care per unique VA patient increased by 47.7% from 2008 to 2013, while it seems that the average amount spent on the compensation and pensions of VA employees increased by 28.7%.

As an example of single-payer style socialized health care, the employees of the Department of Veterans Affairs have demonstrated the single-minded and systematic pursuit of their own interests over those of the veterans who depend upon their care, which is clearly evident in their gaming of the system in the VA's rationed care wait list scandal.

We're afraid that such corruption is absolutely inherent in socialist systems, so much so that this example should be considered to be representative of how such unnatural and repressive systems work. The outcome of the VA wait list scandal should not be considered to be an isolated incident in any way given the established incentives of the VA's administrators.