Evidence continues to mount that all is not well for the new home sales market in the United States. Now that we're armed with the most recent data available for median new home sale prices and median household income through the month of July 2014, let's update the picture of where things stand for the consumers of new homes being built throughout the United States: 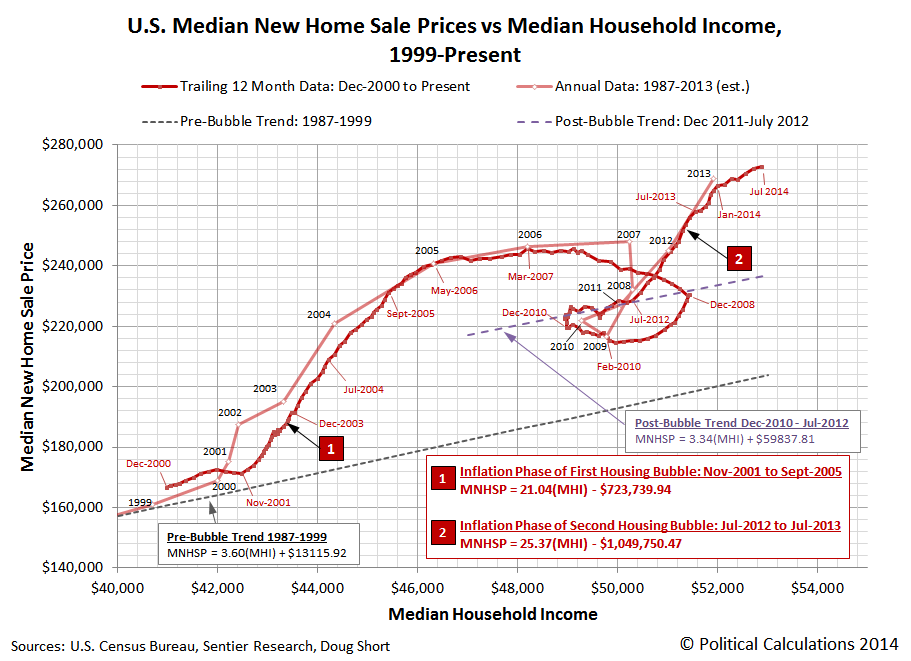 We observe a scenario in today's new housing market that very much echoes the early phases of the topping out of the first U.S. housing bubble after September 2005. Here, after a very robust period of growth during the major inflation phase of the first bubble, where the median sale prices of new homes in the U.S. were rising on average by $21 for every $1 increase in median household income, the rate at which new home sale prices were escalating began to slow significantly before flattening out through November 2007, then crashing as the U.S. economy began to contract in a major recession.

Today, we see that the major inflation phase for the second U.S. housing bubble ran from July 2012 through July 2013, as median new home sale prices rose by $25 for every $1 that median household income increased during that period. Since then, that pace of growth would appear to be decelerating and, since January 2014, to increasingly be flattening out.

That trend continued into August, particularly in areas that had previously been booming during the inflation phase of the second U.S. housing bubble, such as Phoenix, Arizona:

New-home prices across metro Phoenix soared too high and too fast in 2012 and 2013 for many buyers to handle, leading to a slump in sales that has builders worried.

Higher prices for new houses, along with slower-than-expected increases in household income, population and job growth, will cut the number of home sales an estimated 5 percent from last year's level, stalling the long-awaited recovery of the region's homebuilding market.

The slowdown in home sales means fewer construction jobs but better deals for new-home buyers. Home prices have dropped slightly this summer, and builders are trying to lure buyers by offering incentives that include lower mortgage rates and free upgrades on appliances, countertops, lighting and flooring.

That opens up a question of how new home builders are doing, which we'll tackle in the very near future.

Sentier Research. Household Income Trends: July 2014. [PDF Document]. Accessed 3 September 2014. [Note: We have converted all the older inflation-adjusted values presented in this source to be in terms of their original, nominal values (a.k.a. "current U.S. dollars") for use in our charts, which means that we have a true apples-to-apples basis for pairing this data with the median new home sale price data reported by the U.S. Census Bureau.]