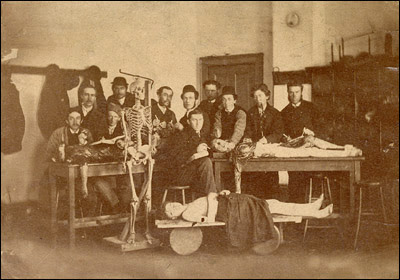 Did you know that there is a shortage of cadavers for training future doctors at medical schools? The Economist explains:

THEY are inert, smelly and upsetting to look at—it's a wonder that dead bodies are in such high demand. But for medical students they are an indispensable learning tool. In the 19th century some medical schools hired body snatchers to dig up the deceased. William Harvey, who discovered the circulatory system, dissected his father and sister. Today the procurement process is more civilised, but schools often complain about a lack of bodies. In America there are regional shortages. In Asia and Africa the shortages are more acute. Some 60m people die each year, so why is there a shortage of cadavers?

Growing demand is part of the problem. The number of medical students is increasing, as is the number of programmes that use cadavers. Certified doctors need bodies too, in order to continue their training. Researchers and pharmaceutical companies use bodies to develop new procedures and treatments. Organs also go to clinics and hospitals for transplants. Some bodies end up on display in exhibits after they are plastinated, while others train police dogs to find disaster victims. A lucky few cadavers get to drive cars into walls to test safety.

Supply, meanwhile, has not kept up. Improved means of communication have meant fewer unclaimed bodies, which is one source of cadavers. Statistics on body donations—the other main source—are spotty, but the giving appears inconsistent and in many countries it is still taboo. In China and the Middle East, for example, dead bodies are treated with reverence, making their donation less common. Complicating matters is the fact that only certain bodies are fit enough for medical study. A good cadaver is generally young, fully intact and not too obese or riddled with disease. It is perhaps not surprising that the supply of such bodies is limited.

These dynamics suggest that there could well be a black market for supplying high quality cadavers as well as the body parts of the deceased to meet the demand. And in fact, there is, as the criminal case of the "Cutter", Chris Aldorasi, of Brooklyn, New York demonstrates:

NEW YORK -- A judge has convicted a man accused of secretly cutting up corpses -- including that of "Masterpiece Theatre" host Alistair Cooke -- as part of a multimillion-dollar body parts scheme.

Chris Aldorasi was found guilty today of enterprise corruption and other criminal counts at a trial in Brooklyn. The defendant, who chose to have a judge hear his case instead of a jury, faces up to 25 years in prison on the most serious charges.

Prosecutors had alleged that Aldorasi and other so-called "cutters," worked in tandem with funeral parlor owners, including two in New Jersey, by taking the parts without family permission and then selling them for use in transplants and other medical procedures.

So how much could a criminal looking to make their living from supplying cadavers to the people who demand them make per cadaver? Criminal prosecutors estimated that Aldorasi collected more than $4.6 million from more than 1,000 corpses in cutting them up for their organs, with at least 10,000 organ recipients and other consumers benefiting from the criminal enterprise. Those figures would suggest that the black market price for a single, "healthy" corpse during the years of Aldorasi's activities from 2001 through 2005 was $4,600, which is consistent with what a "disreputable tissue bank" would earn for a dead body back in 2004.

There are nonprofit businesses that exist to connect cadavers with those who demand them, even though bodies are prohibited from being sold in the U.S. by law. The nonprofits get around that limitation by accepting donated cadavers and charging their customers to process them, where the cost to these consumers can range from $1,300 for "preferred" customers, such as medical schools, and $2,300 for non-preferred customers.

Since the nonprofits are presumably not profiting from their cadaver business (in reality, the incomes earned by those doing this work in the nonprofit organizations will be considerably inflated above the incomes for similar positions in the open, for-profit market), that would suggest that the profit potential of a typical quality corpse is anywhere from $2,300 to $3,300.

And a good quality corpse would likely sell for a much higher price. Which is a big reason why the market for cadavers is so strong and also why the shadier side of the cadaver supply industry is likely to continue its growth.

Unless some sort of options market is developed to meet the demand for the things for which the living need cadavers.