Since we were just discussing our counterfactual for GDP in the age of quantitative easing, which involves the nominal values, we thought we'd follow up with our latest projections for real GDP. The chart below shows what we would expect given the first estimate of GDP for 2014-Q3 that was issued last week if we assume that the biggest factor affecting its trajectory is simple inertia: 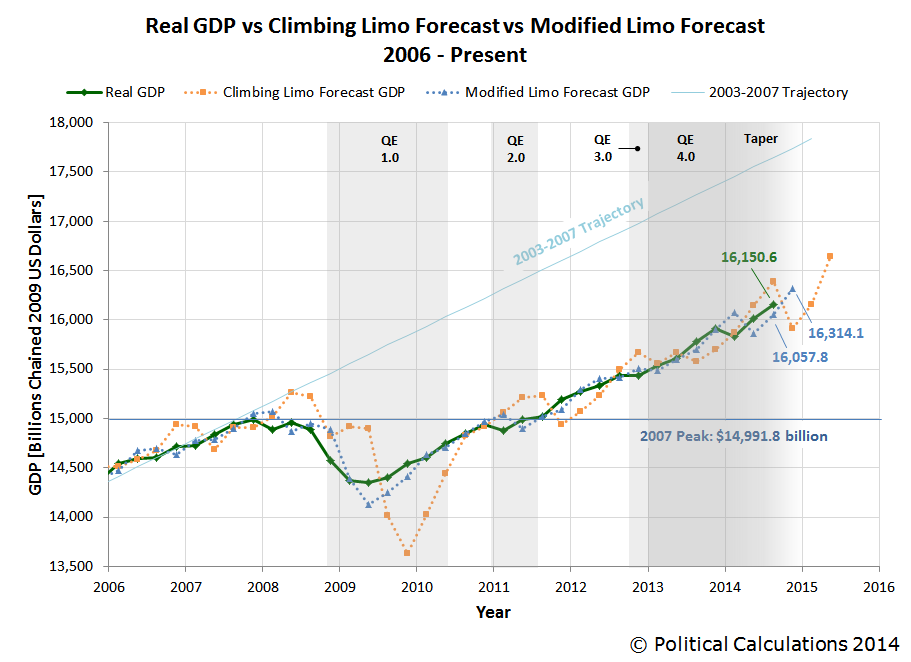 Looking at our modified limo projection for 2014-Q3, it would initially appear that our forecasting method undershot the recorded value of inflation-adjusted GDP by 0.57%. But that's based on the BEA's first estimate of real GDP for the quarter - they will update their estimate twice more during the next two months before somewhat finalizing the value. And the early indication is that the final value that it will be recorded at and our projected value for the quarter will converge, given some strange things going on in the seasonal adjustment factors applied to U.S. defense spending:

– The reported leap in third-quarter defence spending, which added 0.7 percentage points to annualised GDP growth was, as far as we can tell, largely due to a failure of the BEA’s seasonal adjustment process. As a result, we expect defence spending to plunge this quarter, subtracting a similar amount from fourth-quarter GDP growth.

– All of the upside surprise in third-quarter GDP growth (the 3.5% outturn was well above the consensus forecast of 3.0%) can be explained by the 4.6% increase in government spending, which added 0.8 percentage points (ppts) to overall growth. Moreover, nearly all of that boost was due to a 21% leap in Federal defence consumption. That’s the largest increase since the second Iraq war in early 2003. Drilling down further, more than two-thirds of the rise was due to a 74% annualised leap in defence spending on support services for installation, weapons and personnel. This is unusual given that spending on such services typically makes up just 25% of total defence spending.

– Some of the rise in the third quarter could be due to the escalation in military action in the Middle East, but most of it appears to be due to a failure of the seasonal adjustment process. Looking at the averages over the past five years, defence support services spending has increased by 38% annualised in the third quarter only to fall by an average of 34% annualised in the fourth quarter. (See Chart 2.) The BEA all-but confirmed this problem when in an email it told us that it is “trying to determine if any methodology changes are necessary”.

Changes in the reported value of real GDP for 2014-Q3 will result in changes of our projected values for GDP in future quarters.