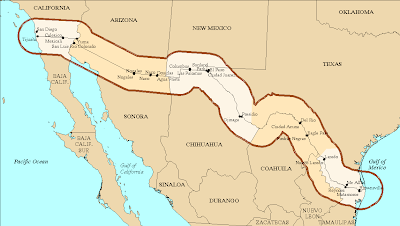 The southern land border of the United States with Mexico is 1,954 miles, or 3,145 kilometers, long. The U.S. government has established a total of 670 miles of fencing, spanning 34.3% of the length of the border.

In many ways, the U.S.' Mexican border fence is just the most recent and visible barrier established between the two nations. Its history dates back to the Carter administration, which initiated the fence in response to a government bureaucrat-created "crisis":

In this context, federal resources for boundary enforcement increased significantly, starting in the second half of the Carter administration with a focus on California, where local and state officials were making the most noise in favor of a border crackdown. There, the federal government installed a 10-foot-high chain-link fence along the seven westernmost miles of the divide, backed by floodlights and increased helicopter patrols.

After that initial effort, known as the "Tortilla Curtain," not much happened until increasing border enforcement to stop people from crossing into the U.S. from Mexico became a major priority for the federal government once more during the Clinton administration.

That initial effort was followed by Operation Gatekeeper in San Diego, California, Operation Safeguard in southern Arizona and Operation Rio Grande in Brownsville, Texas over the next four years, where the increased border enforcement activity greatly increased the costs for individuals seeking to unlawfully cross the border into the United States. Princeton's Mexican Migration Project has documented the cost of unlawful border crossings during President Clinton's tenure in office from 1993 through 2000, which increased exponentially from approximately $750 in 1992 to $2,000 in 2000: 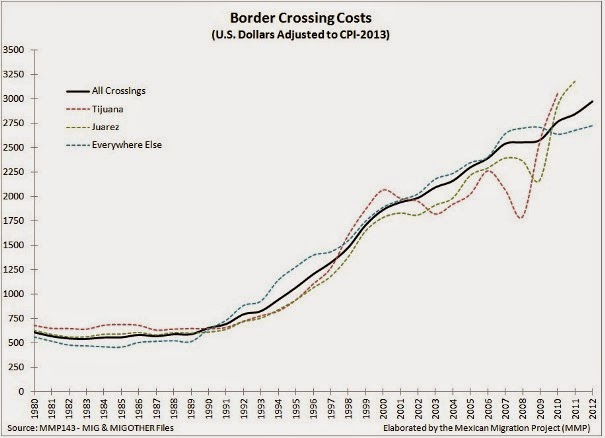 These costs primarily represent what human smugglers, popularly known as coyotes, charge Mexican and other foreign nationals to get across the U.S.-Mexico border and past U.S. border patrol agents. In addition to human smuggling, coyotes often engage in other criminal activity, such as drug trafficking and bribery, and have a history of employing bloody acts against their competitors and law enforcement officials.

The exponential increase in border crossing costs decelerated with the election of President George W. Bush, who was sworn into office in January 2001. However, the costs that foreign individuals pay human smugglers to enter into the U.S. has continued to increase steadily, largely due to the increased border security measures that the U.S. adopted in response to the terrorist acts of 11 September 2001. 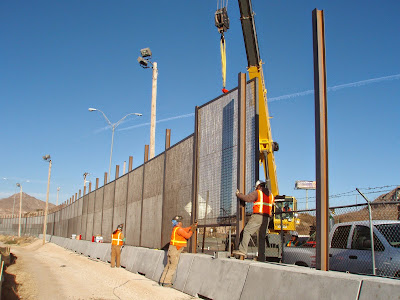 On 26 October 2006, just ahead of the elections in which the Republican party would lose its majorities in Congress, President Bush signed the Secure Fence Act of 2006, which mandated the construction of 850 miles of reinforced fencing along the border. That was later reduced to 670 miles of reinforced fencing by the Consolidated Appropriations Act of 2008, which was approved by the Democratic party majorities that had taken control of the U.S. Congress after the 2006 elections, which was ordered to be completed by 31 December 2008.

In 2008, the average amount that human traffickers made in smuggling people across the U.S.-Mexico border into the United States was $2,500. Between 2000 and 2008, the criminal cost of entry into the U.S. had increased at an average pace of $62.50 per year.

Through the end of 2012, with those 670 miles of reinforced fencing in place, the cost of illegally crossing the U.S.-Mexican border into the United States has risen to approximately $3,000. With just a limited amount of reinforced fencing in place, the criminal cost of entry into the U.S. has increased at an average pace of $125 per year, double what it was when active border enforcement operations were the only impediment in place to the unlawful activity.

Back in 2008, we had actually proposed building what we have, a partially fenced border, for the purpose of further increasing the cost of unlawful entry into the U.S.

We now have the means to completely undercut the coyotes' human smuggling business. If the U.S. government were to now allow foreign individuals to enter into the U.S. after they pay an entry bond/work visa of $1,200, or 40% of what human traffickers charge, they can nearly completely cut the criminal element out of the picture.

Why set that value at 40% of the criminal cost of entry into the U.S.? The idea here is to allow at least two people to be able to lawfully enter into the U.S. for less than what the coyotes charge for one, which would thoroughly undercut their criminal human trafficking enterprise. Border security officials would then be able to focus their efforts upon the purely criminal activities at the border, because there would be no longer be any reason for honest people with no intention of engaging in any other criminal activity to continue to associate with the coyotes.

At the same time, the cost is high enough where it would not lead to a border-crossing free-for-all.

The entry bond/work visa would also provide a source of revenue for deporting the fraction of those foreign nationals who outstay their work visas, while at the same time providing for their replacements in the U.S. labor force.

The question now is are the immigration reform wonks smart enough to adopt the rest of our plan for dealing with illegal immigration?