Political Calculations
Unexpectedly Intriguing!
April 16, 2015
New Jobless Claims In and Out of the Oil Patch

Last week, we featured a number of what we'll call "statistical equilibrium charts" showing the negative break in trend for new jobless claims in the eight states where domestic U.S. oil production has surged in recent years. These charts are really no diferent from the kind of statistical control charts that have been routinely used in modern industrial production for decades to conduct statistical hypothesis tests, but for our application, we really shouldn't use the word "control" in the name of a chart for a process that isn't controlled.

Today, we're going to update that chart with the data we now have through the last full week of March 2015. 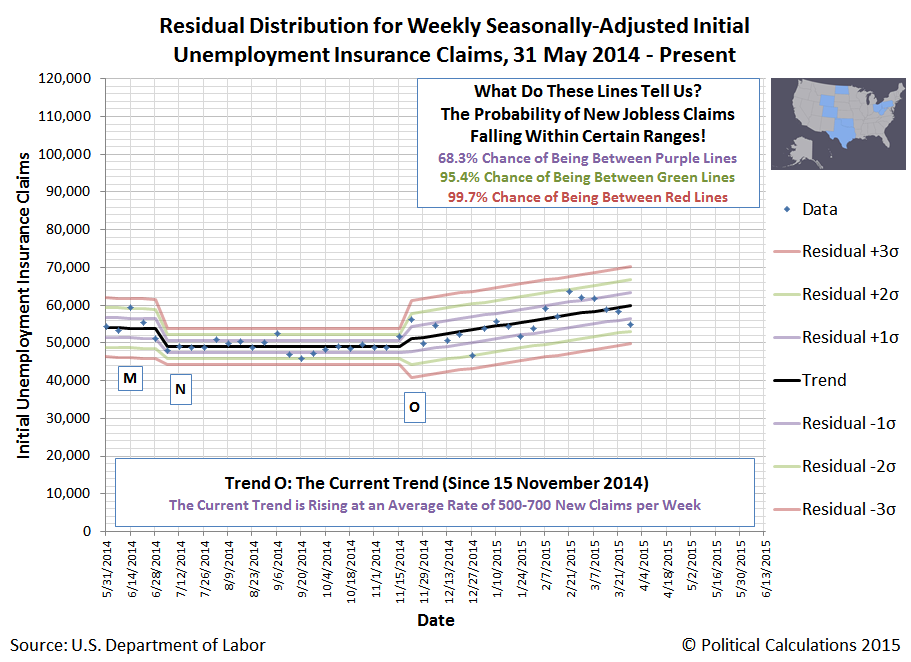 In this chart we observe that when oil prices began falling in early July 2014, the trend in new jobless claims for the high cost of oil production states of Colorado, North Dakota, Ohio, Oklahoma, Pennsylvania, Texas, West Virginia and Wyoming shifted downward but otherwise remained flat into mid-November 2014. And then, that flat trend broke when new jobless claims suddenly began to rise steadily around 15 November 2015.

In reality however, new jobless claims lag the events that prompt changes in their trends by two to three weeks, which is due to the typical weekly and biweekly payroll cycles for U.S. firms. Here, firms seek to minimize disruption to their operations by allowing their current pay cycle to play out before implementing changes in their employee retention plans. Since most Americans are paid either weekly or biweekly, that means new jobless claims show up in the data two to three weeks after the decisions to alter staffing levels have been made.

With that lagging effect in mind, that puts the decision to increase the pace of layoffs in these states at the last week of October 2014 and first week of November 2014. Since falling oil prices would be all but 100% confirmed to be the trigger for the change in trend, that timing corresponds with the spot prices of West Texas Intermediate crude oil dropping below $80 per barrel - about 25% below the peak value of $107.95 recorded on 20 June 2014.

But what about the other 42 states? Here's our chart showing the trend for new jobless claims over the exact same period of time: 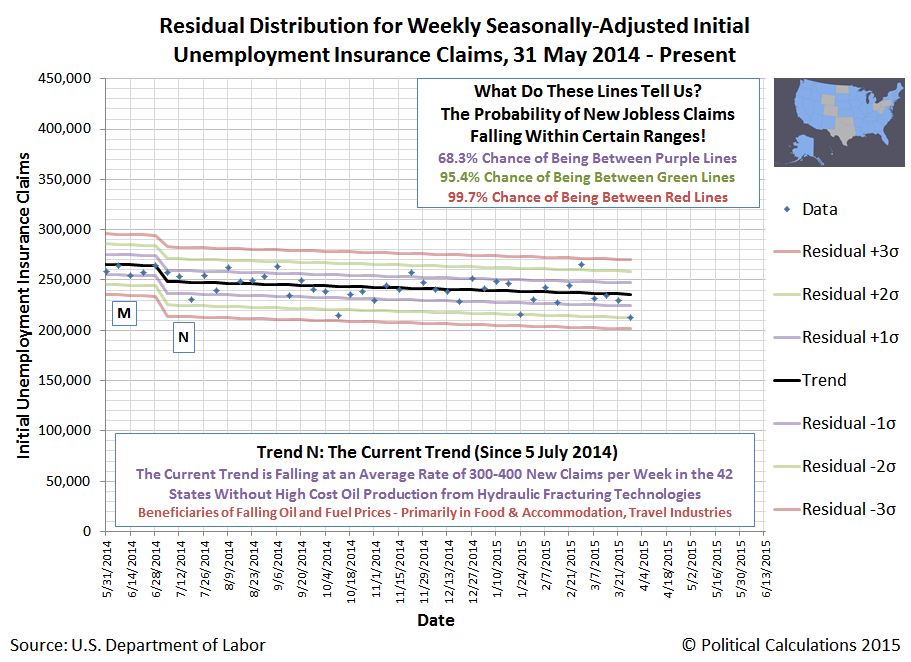 What we find here is that in all the other United States, falling oil prices have prompted a steady trend of improvement in new jobless claims, indicating stronger economic growth was occurring in the rest of the nation. In these states, when oil prices first started falling, there was an immediate benefit for U.S. consumers, who could now buy both the same quantity of petroleium-related products as they did before oil prices began falling, and additional things too, such as dine-out meals. Falling oil prices prompted revenues to grow in other sectors of the U.S. economy in these states.

The same effect initially held true in the 8 high-cost-of-production "shale play" states. Here, when oil prices first started falling, instead of cutting their production and investment right away, domestic U.S. oil producers, continued business as usual. In effect, they did the equivalent of tapping their savings to continue operations as they waited to see if the price drop would be short term event or if it would deepen.

That's why 2014-Q3 saw such apparently robust economic growth, as these two factors combined to produce an outsized surge in GDP growth in that quarter. But not a sustainable one in the face of oil prices that continued to fall and stay down....

The shakeout then began after oil prices dropped below $80 per barrel in early November 2014, which has continued at least through the end of March 2015 (at this writing), where the negative impact is perhaps now beginning to spread out past just the energy industry to hammer business investment and credit markets.

That is why the GDP growth rate dropped so much below the previous quarter's figure in 2014-Q4 and now threatens to be outright negative in 2015-Q1. Because the U.S. has become such a major oil producing nation in recent years, falling oil prices is no longer the pure economic stimulus it had previously been for U.S. economic growth.

But you wouldn't perhaps realize that if you looked at the data on the national level. Nationally, the trend appears flat because these two trends have generally offset each other. 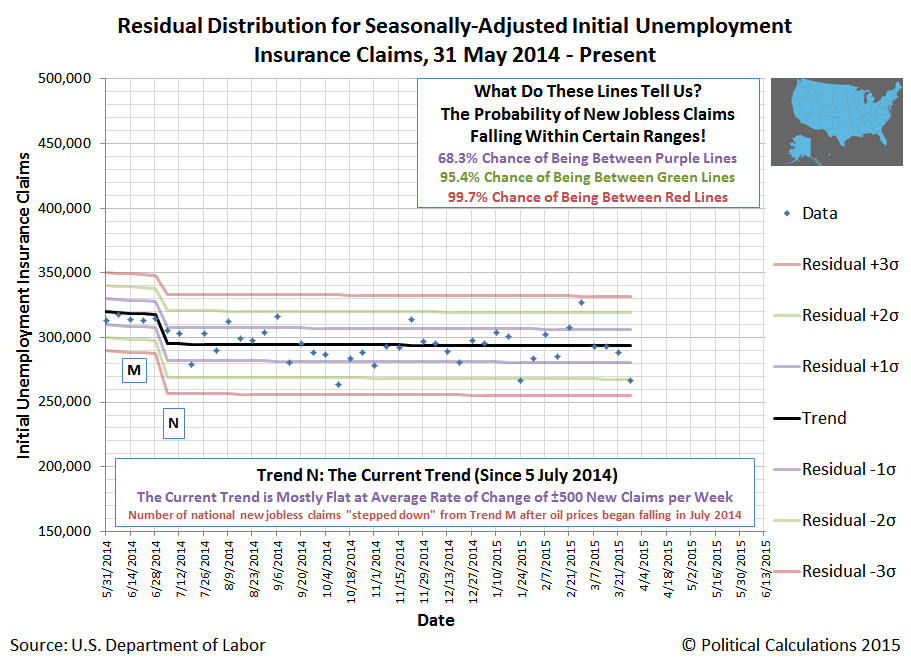 And that's why we call this scenario a hidden recession. Especially to a U.S. media that has pretty much completely missed it until just under two weeks ago, despite all the early warning signs screaming it.

As a final comment, we'll observe that new first time unemployment insurance claims data will be released later this morning. You're welcome to draw the appropriate dots on our charts to get the most up-to-date versions possible for yourselves....