In June 2015, the economy of Earth continued to cool off as recessionary forces concentrated in China resulted in another reduction in the rate at which carbon dioxide is added to the planet's atmosphere for the month. That rate has fallen steadily since it last peaked in October 2013 and is now at the lowest level that has been recorded since May 2012. 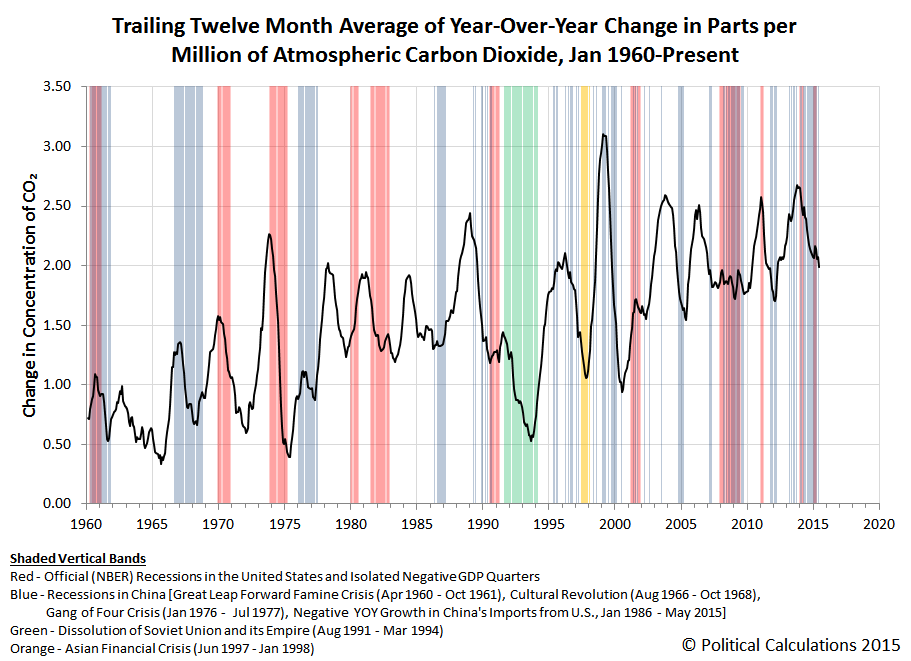 After realizing the close correlation between the timing of the Chinese Communist government's third plenum and the onset of a declining rate at which carbon dioxide as measured at the geographically remote Mauna Loa Observatory in Hawaii was being added to Earth's atmosphere and the correlation we had previously noted between that rate and economic recessions in the U.S., we went back and reworked our previous presentation of the chart presented in this post to consider China's potential contribution to the variation in that rate.

The challenge for us in doing that is the secretive nature of China's totalitarian communist government, which hasn't acknowledged any recession in the nation's economy since the disaster of the Great Leap Forward in the early 1960s.

To get around that limitation, we applied the data we regularly track for the exchange rate-adjusted, trailing twelve month average of the year-over-year growth rate of the value of goods that China imports from the United States, where we indicated any month since January 1986 in which that growth rate was recorded as being negative with blue vertical bars. The result was an almost uncanny correlation between a reduction in China's imports and a negative change in the trailing twelve month average of the rate at which carbon dioxide is added to Earth's atmosphere.

Our next problem was that our source trade data only extends back to January 1985. To fill in earlier periods of time, we focused on periods during which China was experiencing political turmoil, which we believe translated into economic turmoil. These periods are also indicated with blue vertical bars.

Our main takeaway from this portion of our analysis is that the reduction of economic growth in China is remarkably well correlated with negative changes in the rate at which carbon dioxide is added to Earth's atmosphere.

We also more clearly marked other periods of economic contraction in our chart that we had previously identified, such as the dissolution of the Soviet Union and its empire in the early 1990s (vertical green bars) and 1997's Asian Financial Crisis (vertical orange-yellow bars), as it would appear that both events reduced Earth's total economic activity enough to affect the Mauna Loa Observatory's carbon dioxide measurements as they occurred in real time. U.S. recessions and isolated quarters in which GDP growth was recorded as negative continue to be indicated with red shaded vertical bars.

We still have some areas in our carbon dioxide recession correlation chart for which we need to identify the corresponding recession, most notably the period from September 1962 to August 1965. Given that the period of time coincides with the beginning of the Cuban Missile Crisis and its escalation of the Cold War between the U.S. and the U.S.S.R. We suspect it may the result of economic sanctions that the U.S. government may have orchestrated against the Soviet Union in response to its placement of nuclear missiles in Cuba, which could have produced recessionary conditions within the Soviet Union and its satellite nation empire, but which we are as yet unable to confirm given that totalitarian socialist/communist government's secrecy and outright dishonesty about the state of its economy.