Political Calculations
Unexpectedly Intriguing!
09 October 2015
Inventions in Everything: The Alarm Clock of Damocles

People have had a very hard time waking up in the morning for a very long time, which is why alarm clocks were among the first devices ever invented. In fact, there's a pretty good argument to be made that one of the first alarm clocks ever was invented by the Greek philosopher Plato, who rigged up the most advanced, non-sun-based time keeping device of the ancient world, the water clock, with a whistle that would awaken a sleeper after a set period of time, even in darkness.

But soon after that innovation, and for centuries afterward, really sound sleepers developed a natural resistance to the sound of their alarm clocks going off: they grew used to the sound of the alarm, and instead of being alarmed into wakefulness, they continued their slumber.

And that's the problem that U.S. Patent Number 256,265, issued on 11 April 1882, was devised to solve! Invented by Samuel S. Applegate of Camden, New Jersey, the "Device for Waking Persons from Sleep" forever solved the problem of people sleeping in for too long by rigging a frame containing a number of weighted objects above a sleeper, which would be triggered to drop on their head when their alarm clock went off.

Really! Here are the illustrations from the patent that show Applegate's Alarm Clock of Damocles: 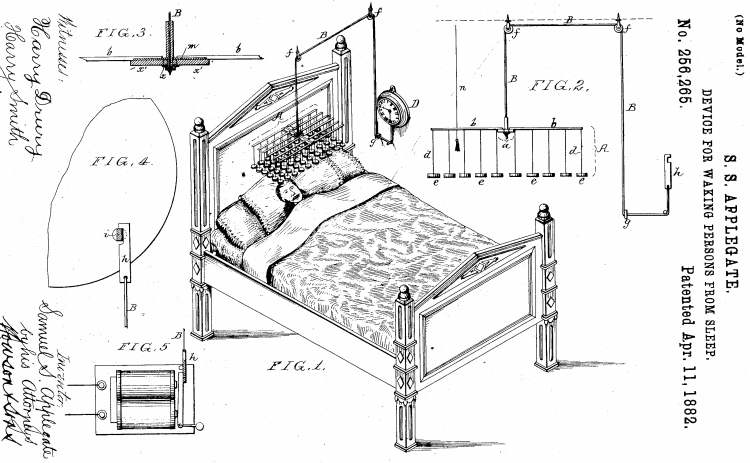 And here is the description of the invention from the patent, in the inventor's own words (emphasis ours):

The object of my invention is to construct a simple and effective device for waking persons from sleep at any time which may have previously been determined upon, the device being also adapted for use in connection with an electric or other burglar-alarm apparatus, in place of the usual gong-alarms....

Ordinary bell or rattle alarms are not at all times effective for their intended purpose, as a person in time becomes so accustomed to the noise that sleep is not disturbed when the alarm is sounded.

The main aim of my invention is to provide a device which will not be liable to this objection.

In carrying out my invention I suspend a light frame in such a position that it will hang directly over the head of the sleeper, the suspending-cord being combined with automatic releasing devices, whereby the frame is at the proper time permitted to fall into the sleeper's face.

In the drawings, A represents the frame, which consists of a central bar, a, having on each side a number of projecting arms, b, the whole being made as light as is consistent with proper strenth. From each of the arms b hand a number of cords, d, and to the lower end of each of these cords is secured a small block, e, of light wood, preferably cork. These cork blocks, however, are not essential, as tassels, or balls of zephyr may be attached to the cords, or the latter alone may be used, or a rectangular frame having having a network of cords may take the place of the frame wiht its pendent cords, the only necessity to be observed in constructing the frame being that when it falls it will strike a light blow, sufficient to awaken the sleeper, but not heavy enough to cause pain....

I prefer to limit the extent of fall of the frame A so that the bars a and b of the same will not come into contact with the sleeper's face....

We're sure that heavy sleepers everywhere thank goodness for Applegate's preferences. On the other hand though, how heavy of a sleep can one have when the objects that will drop hard enough to wake them up, even without pain, are visibly suspended above their faces?