Political Calculations
Unexpectedly Intriguing!
November 16, 2015
The State of the S&P 500 Before and After the Paris Terror Attacks

U.S. markets had already closed on Friday, 13 November 2015 before news of the Islamic terror attacks in Paris, France first crossed the wires, so the first part of our analysis of the U.S. stock market below will consider the state of the market before the targeted massacre of ordinary Parisians.

Here, with the conclusion of 2015-Q4's earnings season, investors had begun to shift their focus to the more distant future of 2016-Q1 in setting stock prices, with the much lower expectations for dividends per share for that quarter pushing driving stock prices lower throughout the week, which is very evident in our updated "accelerations" chart from last week. 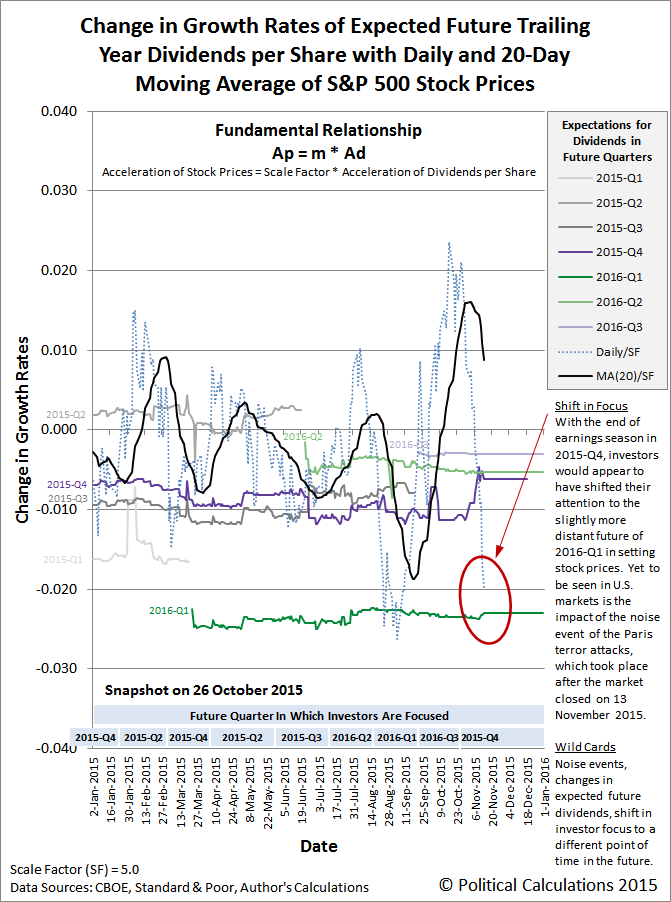 We observe the corresponding change in stock prices occur as the sudden shift from the alternative future defined by the expectations for dividends per share associated with 2015-Q4 to those associated with 2016-Q1. This change was very much a Lévy flight event, which is characteristic of the kind of the seemingly unpredictable quantum random walk that stock prices follow. 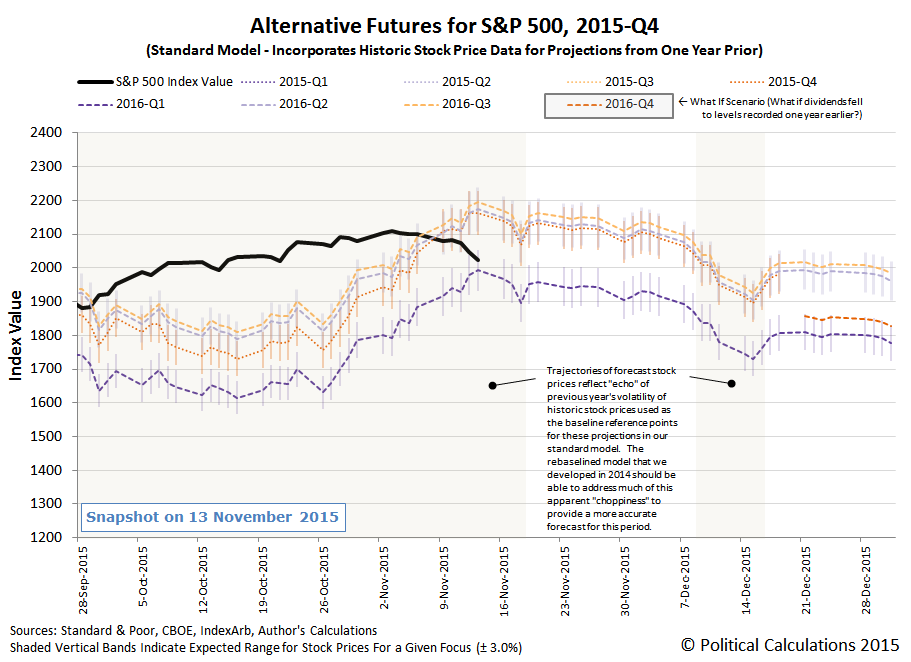 We say "seemingly unpredictable" because we managed to correctly describe how stock prices would behave if investors were to shift their forward looking attention to 2016-Q1 back on Monday, 9 November 2015 (emphasis ours).

"Going forward, a shift in the forward-looking focus to 2016-Q2 or 2016-Q3 would tend to put U.S. stock prices on a slightly higher trajectory than the one we've projected for 2015-Q4, but a shift in focus to 2016-Q1 would coincide with a significant decline in stock prices, similar to what we observed in late August 2015."

So clearly we knew far more than at least one hapless Seeking Alpha commenter, who should have taken more care to pay attention to our long history of pulling off seemingly impossible, yet successful predictions before questioning the usefulness of the information we provide in our analyses.

Now, let's turn our attention to the upcoming week, where if Reuters is to be believed, global stock markets are likely to experience a noise event, which might best be described as the situation where stock prices are affected by things other than their primary driver: expectations for changes in the growth rate of future dividends per share.

To that end, we're going to draw on our previous analysis of how the U.S. stock market reacted to Canada's Parliament Hill Islamic terror attack, which occurred while U.S. markets were open.

"We see that it was the reporting of the exchange of gunfire in the Parliament Buildings at 12:10 PM EDT [K] that prompted the reaction in the U.S. stock market, as stock prices began falling as investors immediately adopted a more "safety"-oriented investing strategy - selling off stocks to capture recent gains. From 12:10 PM to the end of trading, the S&P 500 fell from 1946.16 to 1927.11 - a decline of 19.05 points, or just shy of 1% of the S&P 500's index value at the time U.S. investors learned of the seriousness of the event.

"That's far less than the potential +/-3% range of the typical "noise" level that we expect for the daily variation in stock price prices that is built into our forecast model. Which is to say "hardly any impact at all." And because it's just noise, even that will quickly fade. Terrorism is the act of the impotent."

That said, noise events do have the useful property of allowing stock prices to behave more efficiently than they might otherwise, in that they can promote a shift in investor focus from one particular point of time in the future to another more quickly than might otherwise happen, such as when investors progressively "split" their forward looking focus between different points of time in the future as they weight the probability of certain events occurring at each.