How much does has the U.S. federal government cumulatively borrowed in order to loan money to U.S. students?

Would you believe the answer is nearly $1 trillion dollars? 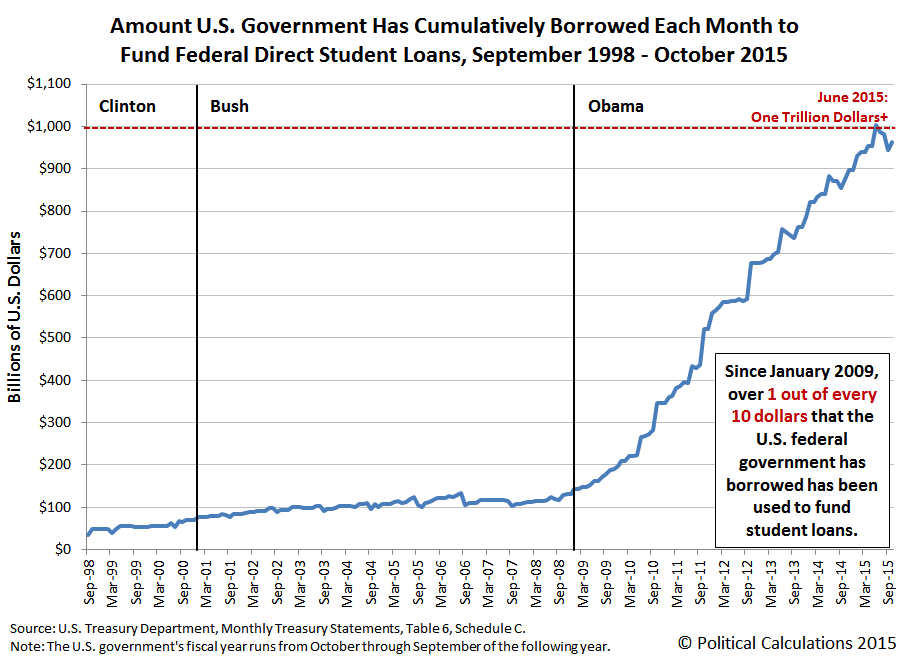 From January 2009 through October 2015, the U.S. government has borrowed over $820 billion to fund its Federal Direct Student Loan Program, with the cumulative amount sitting at $964 billion as of the end of October 2015. Over that same time, the total U.S. national debt had increased by $7.5 trillion, which means that over one out of every ten dollars that the U.S. government has borrowed since President Obama was sworn into office has gone to fund student loans.

Meanwhile, since 2009, the U.S. student loan default rate has ranged between 11.8% to 14.7%, which is to say that over one out of every eight federal government-funded student loans are not being paid back according to their contractual terms.

Despite an increase in the use and awareness of options such as the income-driven repayment plans, 11.6 percent of student loan borrowers had loans 90 days​ or more past due during the last quarter, which ended at the end of September. That's higher than the delinquency rate for car loans, mortgages and even credit cards.

Meanwhile, the overall student loan debt balance increased by $13 billion in the same time frame – bringing outstanding student debt balances in this country to $1.2 ​trillion. To put that in perspective, credit card debt increased $11 billion in the same period to a total of $714 billion, and there's $1.05 trillion in outstanding auto loans – but only 3.4 percent of auto loans are 90 days or more past due.

A footnote reminds readers that these student loan delinquency numbers don't take into account the fact that up to half of the loans in "good standing" are likely not in repayment at all but are postponed because the borrowers are still in or recently separated from school, or are temporarily putting off payment. This means that delinquency rates actually could be twice as high.

Doing some quick back of the envelope math, as of September 2015, the U.S. government's Federal Direct Student Loan program now accounts for 79% of all outstanding student loans in the United States.