According to CBS MarketWatch, approximately 40% of bonds issued by European governments "sport negative yields", which is to say for the people who lend money to these governments, they are guaranteed to lose money on their investments rather than to make money.

The BBC's Andrew Walker considers it to be something like Alice's adventures in Financial Wonderland:

Think about what interest is. The lender gets paid interest for allowing someone else to use their money. But when the rate goes below zero the relationship is turned on its head. The lender is now paying the borrower. Why would anyone do that?

Indeed. Why would anyone do that? Why not just burn cash instead? 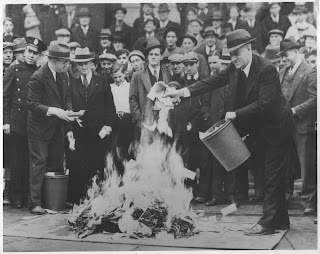 Walker explores two potential reasons that would apply to those lending money to governments at negative rates of interest:

But that can't possibly be all there is! We thought we'd consider some other possibilities.

A third reason might be that all the other things they might do with their funds would provide an even worse rate of return. Which is to say that they are so extremely pessimistic about the opportunities available to them that they are rejecting them completely. But if this reason were the case, why not just sit on cash or some other asset that can be expected to hold its value?

A fourth reason would be to deliberately earn a guaranteed negative income to offset other, more positive income and reduce their potential tax liabilities, where they are in effect sheltering the income they earn from other, better investment opportunities from being subjected to unreasonably high tax rates. The key here would be to get their income below the threshold that would define a particular marginal tax rate level or perhaps even a threshold that defines whether they would be eligible for some subsidy benefit.

A fifth reason takes inflation into account. Or rather, deflation. Here an investor who chooses to buy government bonds with negative yields could come out ahead, in real terms, if they reasonably expect that the rate of inflation over the term of the bond's life will be even more negative.

That's what we could come up with as we were writing up this post. We're sure there are other reasons why an individual or firm would actually choose to lend money to a government for a negative rate of return.

But perhaps a better question to ask is what does a government gain by borrowing money at a negative interest rate? Isn't that the same as saying that the government is going to default on its debt and won't even try to pay back the amount that it has borrowed, but promises that it will absolutely, positively pay back "this much"?

We suppose that's one way to get the growth of the national debt under some semblance of control....

Update 18 April 2016: One of our sharp readers added some additional insight into why an investor might choose to buy a negative-yielding investment:

If you are holding a near zero interest rate bond, when the government issues negative rate bonds, the par value goes up on your low interest bond. A tidy profit on the capital gain. You might buy a negative rate bond betting on the rate going lower and pay the monthly interest as a fee to participate in gaming the system.

They also took an a bigger question: "What is the real reason to have negative interest rates?"

The real reason for negative interest rates: The Treasury sells the bond on the open market via the auction. Who buys? The banks and brokerage houses who in turn sell it to the Fed on the secondary market to mask via a wash sale who is really buying the bonds. With what does the Fed buy this bond? Electronic ones and zeros they pull out of the ether in the form of a wire transfer. Hence, no excess physical printing of money which is why hyper-inflation has not shown it's ugly face. This is how the Fed feeds/lends money to a deficit spending government.

Additionally, the Fed paying negative interest rates then gets to magically reduce its balance sheets by paying this money to the government as well to help magically pay down the Treasury's own debt pile or just waste it on more spending.

Imagine this scheme if you will: The US Treasury charges a 5% negative rate, the Fed buys the bond to give the Treasury the principal. In how many years will the Fed pay off the bond with the Treasury *IF* the Treasury applies this interest to the principal of other bonds? The rule of 72 says, (72/5) 14.4 years, a doubling, which means both the negative rate bond and another bond will be paid off in full merely using the interest rate payments.

Taken that way, negative interest rates might best be considered to be really severe form of financial repression, intended to benefit overindebted governments and the banks that control them at the expense of ordinary people.

It would seem that the obvious alternative of stopping doing stupid things and cleaning up their acts is just too much to ask of some government/bank industrial complexes.