Political Calculations
Unexpectedly Intriguing!
May 12, 2016
How Much Money Does the U.S. Government Owe to China?

How much money does the U.S. federal government owe to China?

Answering that question is a bit harder than it sounds, because in addition to its own financial institutions and those of Hong Kong, China loans money to the U.S. indirectly through a number of foreign intermediaries - most notably in the international banking centers in the United Kingdom, Belgium and in recent years, Ireland.

Using historic data trends to estimate the portion of each nation's reported holdings of the U.S. national debt likely belong to each nation, we then assigned any surplus in those holdings to China. The chart below reveals what we found for the ten year period from January 2006 through January 2016. 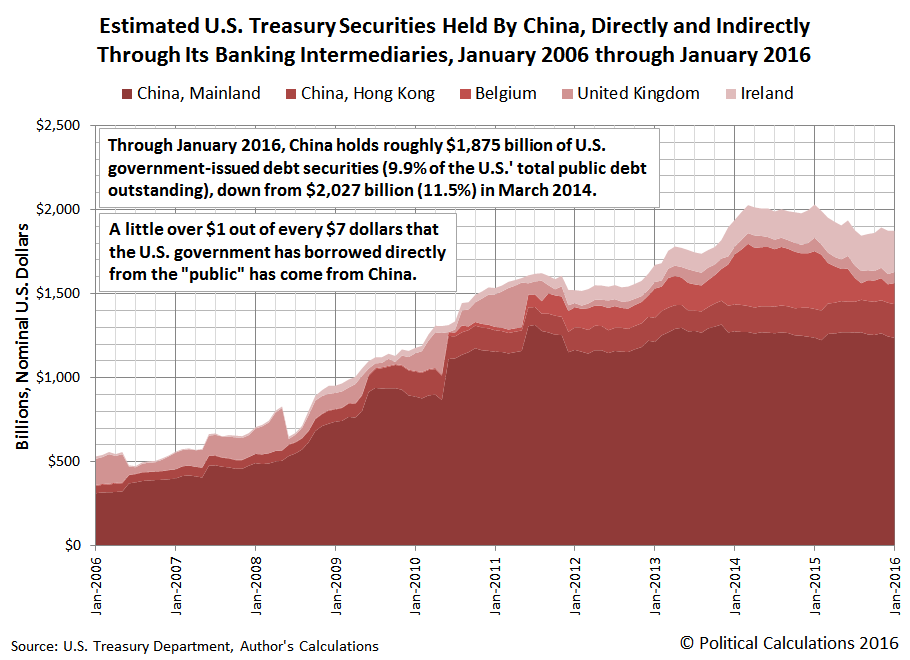 In the 10 years from January 2006 through January 2016, we estimate that China nearly quadrupled its holdings of U.S. Treasuries, from roughly $500 billion to almost $2 trillion. China therefore accounts for approximately $1 out of every $7 that the U.S. federal government has borrowed from the public in order to sustain its spending at levels that are considerably elevated over the revenue it collects through taxes and also the payments it receives for federal direct student loans.

Meanwhile, through January 2016, China holds roughly $1,875 billion of U.S. government-issued debt securities (9.9% of the U.S.' total public debt outstanding at that time), which is down from $2,027 billion, or 11.5%, in March 2014, as China has liquidated a significant portion of its holdings through its Belgium-based intermediaries.