Previously, when we considered the psychological profile of pseudoscientists, we wondered if there wasn't an alternative checklist to the one we use for detecting junk science, but one that if followed, would lead to the opposite of junk science.

It occurred to us that there just might be and that it might be found in Jeremy Kun's "Habits of highly mathematical people"! Here's his story of how it came about as a response to a very common question heard by math teachers everywhere, along with the basic list.

The most common question students have about mathematics is "when will I ever use this?" Many math teachers would probably struggle to give a coherent answer, beyond being very good at following precise directions. They will say "critical thinking" but not much else concrete. Meanwhile, the same teachers must, with a straight face, tell their students that the derivative of arccosine is important. (It goes beyond calculus, in case you were wondering)

So here is my list. The concrete, unambiguous skills that students of mathematics, when properly taught, will practice and that will come in handy in their lives outside of mathematics. Some of these are technical, the techniques that mathematicians use every day to reason about complex, multi-faceted problems. Others are social, the kinds of emotional intelligence one needs to succeed in a field where you spend almost all of your time understanding nothing. All of them are studied in their purest form in mathematics. The ones I came up with are, 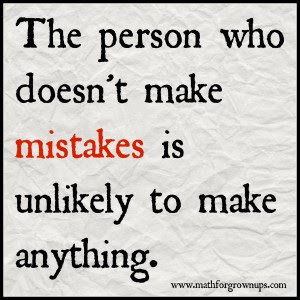 Kun's essay is very much a RTWT, and for our money, the section on "being wrong often and admitting it" is perhaps the most valuable aspect of it. Long time readers of Political Calculations know that we actually enjoy acknowledging when we've been wrong or have made errors in our analysis, because we learn more as part of the process of getting to the truth, which is where we really want to get in doing what we do. That's why we take time to describe how to replicate the mistakes we've made and also why we even thank those who identify our errors for the improved insights that result from correcting the mistakes!

True story. Earlier this year, in replicating an analysis that Mark Perry did, we identified a problem with the data he used that meant that it could not support his findings. After we alerted him to the issue, he was extraordinarily gracious and in fact, went the extra mile to consult with others to identify if there might be other issues with the data. He then updated his original post where he had presented his findings to identify and describe each the problems with the data that had been found.

That's a key difference between science and pseudoscience. Even though a mistake had been made, Perry took that mistake as a challenge to improve, and to do so in a way that would benefit others, which we would describe as model scholarly behavior. That contrasts with the actions of pseudoscientists who, when mistakes are found in their findings, often react by seeking to distract attention away from their mistakes, and who often resort to incredibly unscholarly behavior in doing so.

Mistakes are a fact of human life. It's how you recover from them that determines the kind of person you are.

Here's an excerpt of that portion of the essay:

Being wrong often and admitting it

Two mathematicians, Isabel and Griffin, are discussing a mathematical claim in front of a blackboard. Isabel thinks the claim is true, and she is vigorously arguing with Griffin, who thinks it is false. Ten minutes later they have completely switched sides, and now Isabel thinks it's false while Griffin thinks it's true.

I witness scenarios like this all the time, but only in the context of mathematics. The only reason it can happen is because both mathematicians, regardless of who is actually right, is not only willing to accept they're wrong, but eager enough to radically switch sides when they see the potential for a flaw in their argument.

Sometimes I will be in a group of four or five people, all discussing a claim, and I'll be the only one who disagrees with the majority. If I provide a good argument, everyone immediately accepts they were wrong without remorse or bad feelings. More often I'm in the majority, being forced to retrace, revise, and polish my beliefs.

Having to do this so often-foster doubt, be wrong, admit it, and start over-distinguishes mathematical discourse even from much praised scientific discourse. There's no p-value hacking or lobbying agenda, and there's very little fame outside of the immediate group of people you're talking to. There's just the search for insight and truth. The mathematical habit is putting your personal pride or embarrassment aside for the sake of insight.

It's such a contradiction to the kind of behavior that seems part and parcel with that of the peddlers of junk science. Please do RTWT - it's well worth your time!