Sometimes, words just cannot express what we think when we come across an invention that solves a problem that we never knew existed.

Such as the case of nonhumans who need to know the time, but on their own terms. Which is, of course, why inventors Rodney Metts and Barry Thomas joined forces to invent timepieces for animals, or if we go by Figure 1 of U.S. Patent 5,023,850, which was really issued by the U.S. Patent and Trademark Office on 11 June 1991, and which we might better describe as "watches for dogs".... 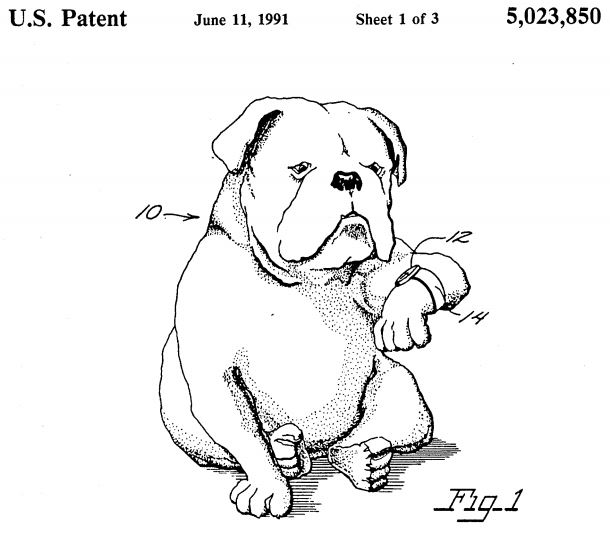 The best part of the patent is the background description, which we can only copy and paste as it appears in the patent.

Watches, clocks, and the like keep track of the passage of time on a human scale, or in terms of human time. Specifically, a day is defined by a single rotation of the earth on its axis; the day is then divided arbitrarily into twenty-four hours. Each hour is divided into minutes, the minutes into seconds. A day, a minute, a second have value to a human being in terms of the lifetime of a man; a week has a greater value than a day; a year, a greater value still. Humans schedule their activities with these values in mind.

Animals, such as dogs, live shorter lives as measured by human time than people. A dog that lives ten years has lived a full life; a man might live 77 years to live a full life. The relationship between the lifetimes of humans and dogs can be related by stating a period of time in "dog years." Two human years is fourteen "dog years." Although this relationship might perhaps be helpful in determining whether a dog or other animal is full grown or not, it does little to help the owner of a pet put the proper value on the animal's time. Various animals have different lifetimes. For example, seahorses and rats live an average of three human years; pigeons live three and one-half years; goldfish and hamsters live five human years; hogs, 9 years; dogs, 11 years; cats, 18 years, beavers, 12 years; lobsters, 15 years; bats, lions, and horses live 20 years; dolphins live 25 years; brown bears live 47 years and polar bears live 33 years; gorillas live 45 years; alligators, 50 years; elephants, 60 years; and giant tortoises, 100 years. All of these have a corresponding multiple to relate to them to human time.

And now, thanks to inventors Metts and Thomas, all species might have novelty watches, which means that they'll no longer have any excuse for not being on time again!