On Friday, 9 September 2016, the S&P 500 appears to have experienced a Lévy flight event, as uncertainty related to the expected stance of some Federal Reserve officials with respect to how they will vote on whether to hike short term interest rates at their upcoming meeting on 21 September 2016 prompted a significant number of investors to draw their forward-looking focus toward the current quarter of 2016-Q3 and away from the distant future quarter of 2017-Q2, from where it has largely been fixed since 11 July 2016.

If our modified futures-based model is correct, investors appear to be nearly equally split their focus between 2016-Q3 and 2017-Q2 in setting stock prices through the end of trading on 9 September 2016, as stock prices gapped lower at the open then fell fairly steadily throughout the day to reach its lowest value at the closing bell. 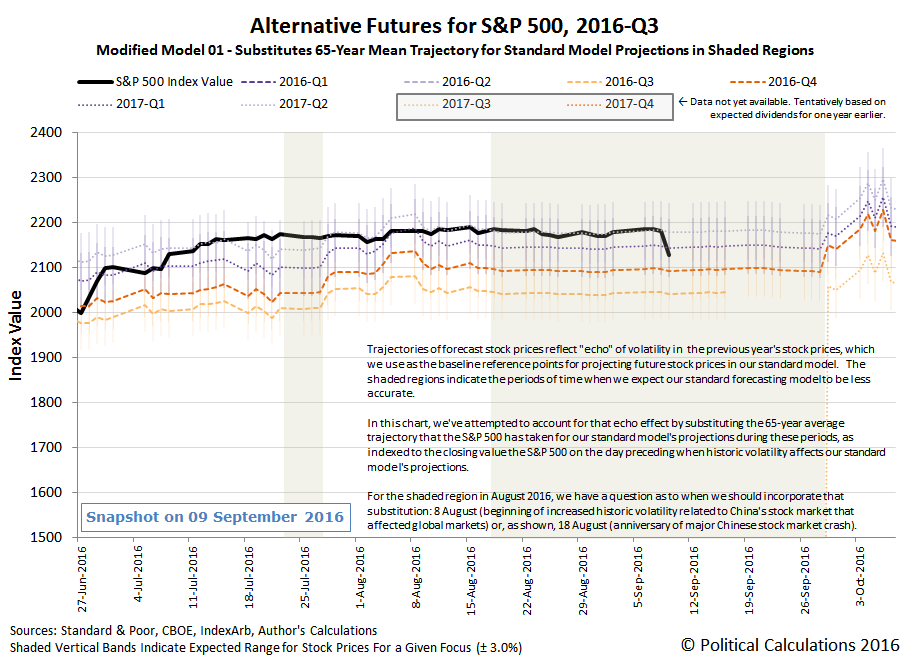 If investors should fully shift their attention to the current quarter of 2016-Q3, the S&P 500 could potentially fall by another 4-7% in the next week. More likely, with 2016-Q3 now drawing to a close, investors will split their focus between the very near term present and the far future, with stock prices fluctuating between the levels corresponding to their being focused on 2016-Q3 and 2017-Q2.

Those potentially large fluctuations will continue until investors have reason to collectively focus on just one particular quarter in the future, after which stock price volatility will diminish, as stock prices will move from whatever level they are when that happens to a level consistent with that alternative future. At least in the absence of a fundamental change in the expectations that investors have for future dividends and earnings, which would alter the projected trajectories themselves, or by another significant noise event, which are driven by the reaction of investors to the random onset of unexpected new information.

If any of that sounds familiar, we just described the summer of 2016, complete with how stock prices behaved in response to the Lévy flight event of the unexpected outcome of the Brexit vote. That event actually produced two Lévy flights - a sharp sudden crash immediately after it happened, followed by a rapid recovery as investors collectively found reason to focus on 2017-Q2 afterward, with the latter flight being shown on the chart above. Only after the market settled, there were no significant changes in future expectations or other speculative noise events to even modestly affect stock prices, which is why the summer of 2016 turned out to be so boring for market observers outside of the Brexit event.

Now, September has arrived, where firms that have been holding back on delivering bad news will often finally come clean and face the music before getting too far into the fourth quarter, leading investors to reset their expectations of both how the current year will end and how the future will be more likely to play out. That dynamic is a big reason why the months of September through November are the months most at risk of major market crashes.

As for what prompted investors to change their focus, here are the headlines that caught our attention during Week 1 of September 2016, the first full week of the month.

For a bigger picture view of the week's major market and economy news, Barry Ritholtz summarizes those stories into positive and negative categories.