Since bottoming in December 2015, trade data reported by the U.S. Census Bureau on the value of goods and services imported by China from the U.S. may have begun to stabilize in the last several months, with the year over year exchange rate adjusted rate of growth of U.S. exports to China alternating between positive and negative territory. This pattern suggests that China's economy has improved to the point where the value of the goods it imports from the U.S. is leveling out after having experienced a prolonged negative trend, which took firm hold in September 2014.

At the same time, the year over year growth rate of the value of goods imported by the U.S. from China has been improving since bottoming in March 2016, but still has yet to return to positive levels. That outcome indicates that the U.S. economy is continuing to slip through July 2016, but at a slowing rate, which is an indication of improvement.

Both trends can be seen in the following chart. 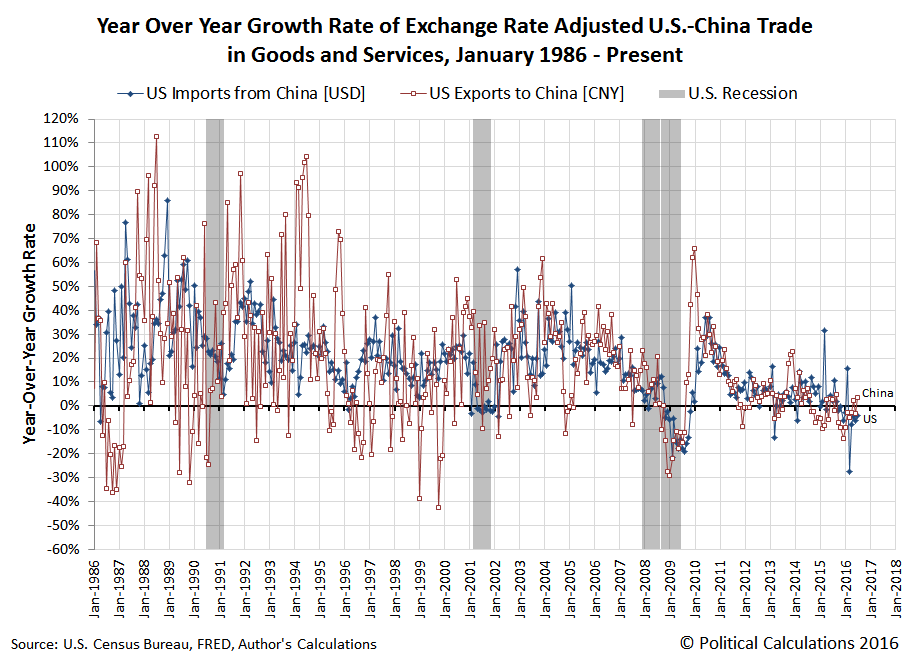 Going back to China, there are some pretty solid indications that nation's economy has improved in recent months, although it is still mixed overall, which coincides with what the trade data would seem to be communicating.

Signs of strength in China's industrial sector should give Beijing room to push much-needed reforms through the end of the year, though trade and investment are expected to remain weak, according to Reuters polls ahead of a flurry of August data.

Growth momentum from a housing recovery and government infrastructure spending, and evidence that companies are hoarding cash instead of investing, means China's policymakers are unlikely to cut interest rates or bank reserve requirements any time soon, sources have told Reuters.

The economy grew faster than expected in the second quarter, and strong July industrial profits and an official August factory survey last week showed momentum is continuing into the third quarter.

As we're writing this, we're awaiting the release of China's official trade statistics for August 2016, which while not as accurate as the U.S. Census Bureau's statistics, are valuable for indicating the direction of China's trade, if not the true value. So since you'll be reading this after that report is out, if China's exports are down, you can take that as an indication that the economies of the nations to whom China ships goods are experiencing headwinds, or if they're up, their economies are showing signs of growth.

The same principle will apply for China's imports, which will tell us similar information about the state of China's own economy, which will have to do until we get more reliable trade numbers from the U.S. Census Bureau next month.

China's trade numbers have become a big deal because China is grabbing more of the global trade market.

China is eating up a larger chunk of the world’s shrinking trade pie.

Brushing off rising wages, a shrinking workforce and intensifying competition from lower cost nations from Vietnam to Mexico, China’s global export share climbed to 14.6 percent last year from 12.9 percent a year earlier. That’s the highest proportion of world exports ever in International Monetary Fund data going back to 1980.

While that would be a more impressive achievement if global trade were growing, we fear that increasing its share of global exports by so much while the overall level of trade is shrinking will mean that success will come with protectionist calls to shrink that trade in the nations on the declining side of the transactions.

There's a lot more to be lost than gained if that view becomes dominant.

Update 8:22 AM EDT: China's trade data is out! Imports are up, signaling a stronger Chinese economy, and exports are down, but by a less than expected amount, suggesting improving economies elsewhere in the world.