Do you remember the effect that the epidemic of avian influenza had upon the U.S.' poultry industry in 2015?

If not, here is a brief recap of how scary things were, especially in the states where most farm-raised turkeys are produced:

"Sometimes the first symptom you see is dead birds," said Dr. Bill Casto of USDA Veterinary Services. "It'll sweep through a commercial house, and in two hours they can go from all healthy birds to 75% mortality."

By the end of summer in 2015, the outbreak of the H5N2 avian flu virus had caused an estimated loss of 50 million chickens and turkeys in the U.S., as it became the "largest animal disease outbreak in the history of North America".

It was so bad that going into November 2015, grocery stores across the nation were warning Americans that their supply of turkeys for Thanksgiving would be at risk of running out before Thanksgiving.

Fortunately, something magical happened that ensured that every American family who wanted to have a turkey for Thanksgiving 2015 would be able to have one. See if you can pick up on what that magical event was in the following passage:

The experts say if you have your heart set on turkey for Thanksgiving, talk to your grocer ahead of time.

"Just check with them," said Roy McCallister of the USDA's Homeland Security Unit. "Make sure they have in stock what you want. The quantity is somewhat reduced but it's not eliminated There's still a quantity of turkeys on the market."

But the price will be higher than usual.

"Yes, as an average, the price of turkey, chicken, even eggs has increased due to the lack of production that has been caused by Avian flu," McCallister said.

The increased price of turkeys communicated to the American consumers who still greatly demanded them just how much more scarce they had become, leading a good number to adapt to the situation by changing the menu for their Thanksgiving holiday dinner to incorporate other, less relatively costly proteins in place of the traditional turkey. At the same time, every American family that was willing to put a higher value on having that traditional turkey at the center of their Thanksgiving dinner instead of those other options could have one just by sacrificing a bit more of what's in their wallets.

The end result of that communication through price tags was sufficient to ensure that the available supply of turkeys in U.S. grocery stores would be enough to fully make it through the Thanksgiving holiday, where one savvy shopper snapped the following picture of a real Black Friday deal! 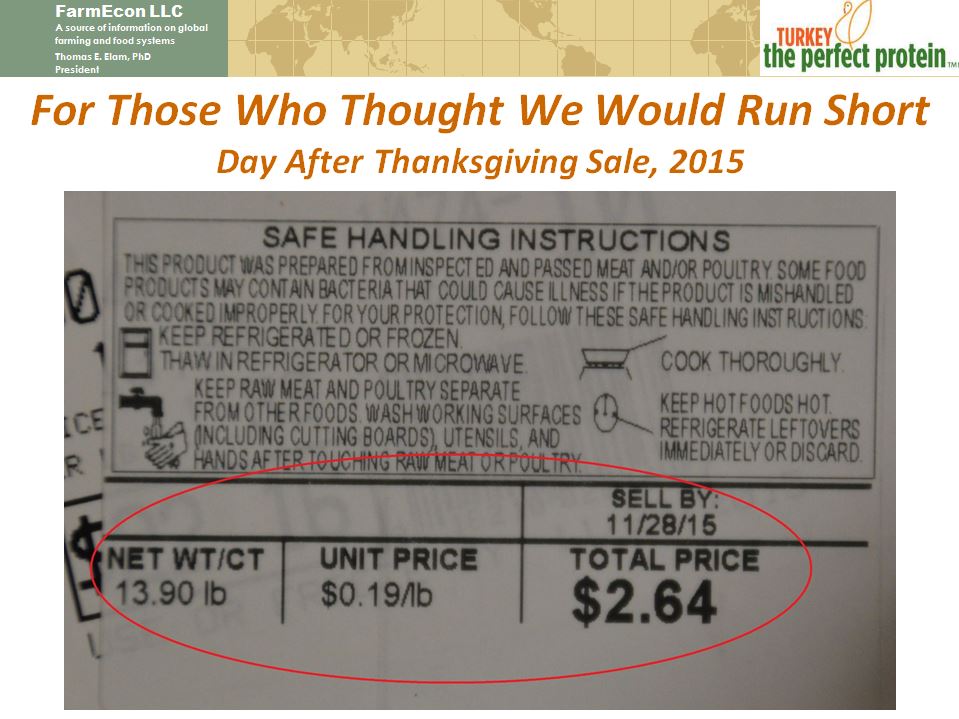 And thus, 2015 became known as "Almost The Year Without Enough Turkey for Thanksgiving". We're sure it will soon become an animated holiday classic, complete with really catchy musical numbers. Something along these lines!...

Everyone knows you're out of ideas, Hollywood. Call our agent!