It's time once again to celebrate the most American of all holidays, Thanksgiving, which here at Political Calculations means we turn our site over to all things turkey-related during what for most Americans will be a food-filled week of festivities!

And what better way to kick off Thanksgiving Week 2016 than by focusing on what 7 in 10 Americans say must be at the center of the dining tables in order to have a truly traditional Thanksgiving dinner this Thursday, the turkey!

But that bird on this year's table will be a lot different than the ones that may have occupied the middle of American dining tables during the first 340 years of the holiday's history. It will be more than double the size!

In the United States, a male wild turkey will grow to a weight of somewhere between 14 and 17 pounds, while a female turkey will only grow to be 8 to 10 pounds.

And until the early 1960s, turkeys raised on U.S. farms weren't much bigger than that!

A lot has changed in the last 55 years. Today, the average domestic live turkey inspected by the USDA has doubled in weight in the years from 1961 to the present, rising from 15 pounds in 1961 to just over 30 pounds as of 2013, where it has held roughly steady at that level in the years since. That's an amazing increase in the productivity of U.S. turkey producers, which is all the more remarkable in there having been so little change in the preceding 340 years! That kind of increase in the productivity of American farmers is also a big reason for why the cost of a "traditional" Thanksgiving dinner in 2016 will be lower than both last year and also 20 years ago after adjusting for inflation (HT: Mark Perry). 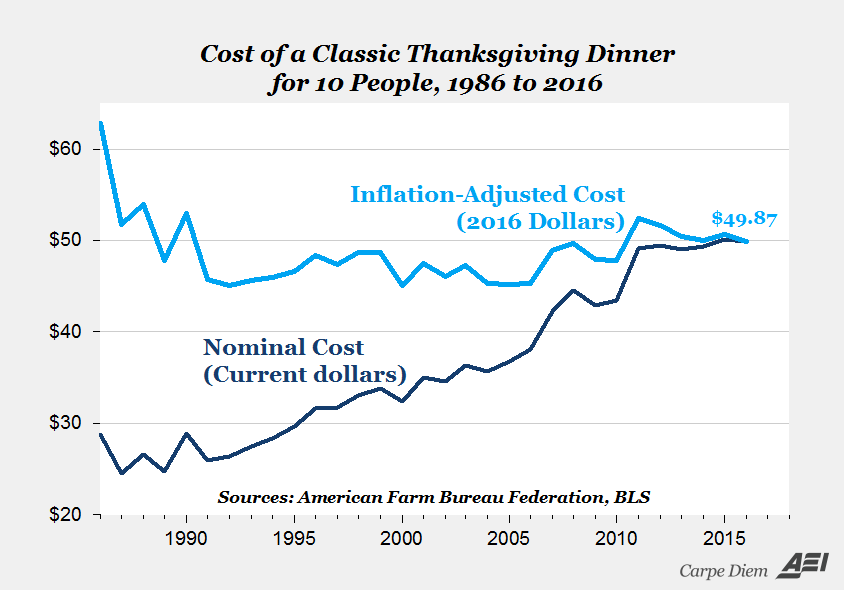 Without the increase in productivity, nearly all food prices would be considerably higher in real terms today, so if you're looking for something to be thankful for this week, there's something to cheer!