As a holiday tradition, Thanksgiving has been around for 395 years. And though the first Thanksgiving celebration likely didn't feature turkey at the center of the dining festivities, in the years since, the idea of serving turkey as the main protein for Thanksgiving dinner has become firmly established.

So much so that 88% of Americans who responded to a survey conducted and reported by the National Turkey Federation reported eating turkey on Thanksgiving.

There may be quite some sampling bias there, seeing as we wouldn't expect the National Turkey Federation to be polling very many non-turkey eaters, but ever since Norman Rockwell immortalized a gigantic turkey being served at an American family's Thanksgiving dinner in 1943, that really is what Americans have come to anticipate being served at their Thanksgiving dinners.

And in 1943, that was quite something, because the price that U.S. turkey farmers would have received for their birds in November of that year was $0.327 per pound, which in terms of 2016 U.S. dollars, means that 1943's Thanksgiving turkey would have cost the equivalent of $4.54 per pound. 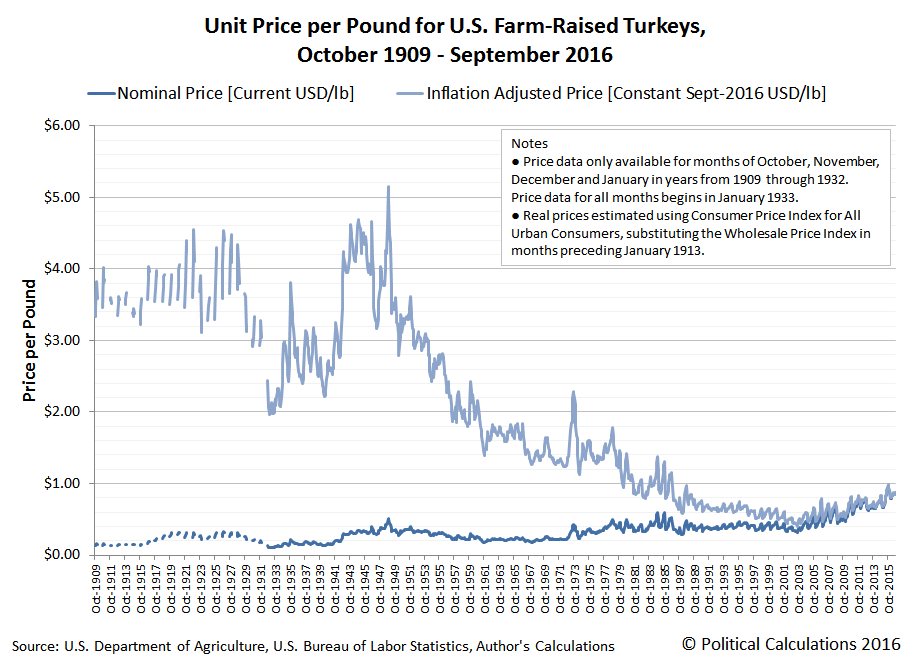 The story of turkey prices before World War 2 isn't greatly different. In equivalent 2016 U.S. dollars, turkey prices ranged between $3.00 and $4.50 per pound in the two decades from 1909 to 1929, before plummeting by an inflation-adjusted dollar a pound during the Great Depression, before rising in price during the rationing years of World War 2.

What those inflation adjusted prices tell us is that serving turkey at Thanksgiving was an expensive proposition for most American families in the years before, during and immediately after World War 2. In fact, U.S. turkey prices peaked at $0.514 per pound in December 1948, the equivalent of $5.15 per pound in 2016, before something genuinely remarkable happened.

The price of farm-raised U.S. turkeys began to fall dramatically and mostly steadily in the sixty years from 1950 through 2009, to the point where the price of turkeys ranged between $0.41 and $0.81 per pound during the first decade of the 21st century, whether adjusted for inflation to be in terms of 2016 U.S. dollars or not.

Still, after adjusting for inflation, that's about 22% of what they would have cost one hundred years ago! And what that change in cost over time suggests is that dramatically falling prices may be a major contributing factor to why turkey has become the centerpiece of choice for Americans celebrating Thanksgiving - especially in the years since World War 2.