14 December 2016 is the day that the Fed finally acted for the second time in the last 10 years to raise short term interest rates. Let's see how the market responded to that news, via the following chart for the S&P 500 on 14 December 2016. 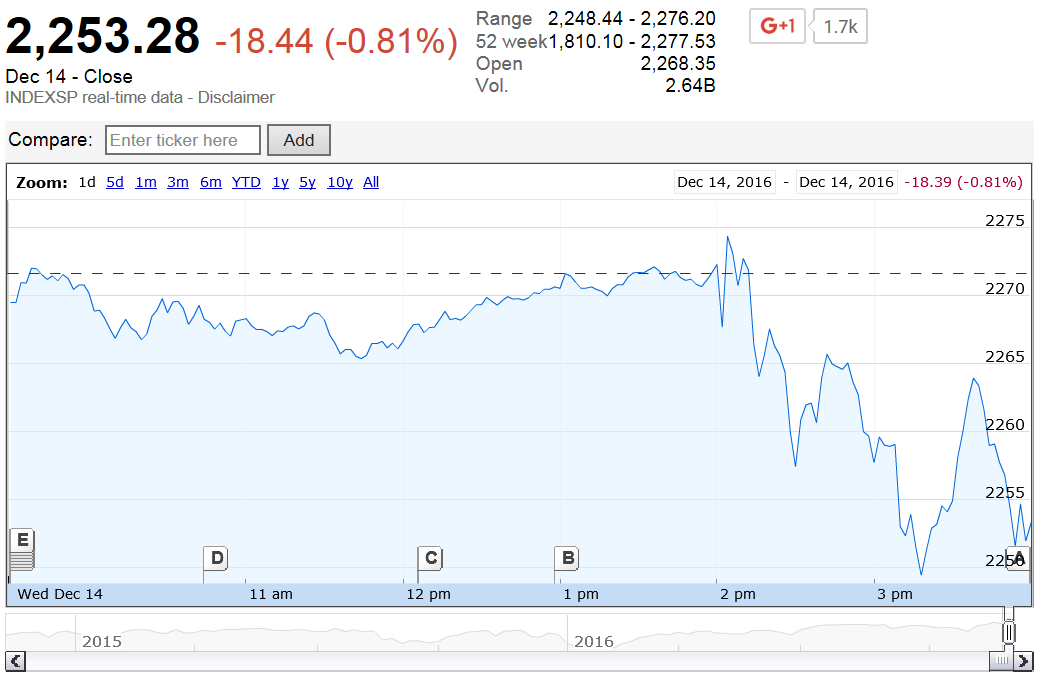 After having traded within a narrow range for much of the day, the S&P 500 quickly spiked up to its high for the day at the 2:04 PM EST mark as the market's basic initial reaction to the Fed's expected rate hike announcement was effectively pre-programmed.

But that announcement had a surprise in it, which we can see in what happened after that point of time. Since it takes about 2 to 4 minutes for investors to react to news that they weren't previously anticipating, this timing suggests that the specific news that caught the market off guard did so within the context of the Fed's expected rate hike announcement.

Since the rate hike itself was expected, we can use contemporary media reports to identify the specific bit of unexpected news that turned the market south for the day, because that news would have been most likely highlighted in the reports being posted within the same narrow window of time. Fortunately, the Wall Street Journal provided a timeline of its news coverage allows us to identify exactly what that specific bit of previously unexpected news was.

So if you're looking to personally blame someone other than the Fed for falling stock prices on 14 December 2016, and can't make a case against the Russians stick, you'll find no better scapegoat than the WSJ's Ben Leubsdorf! We don't know yet if he's the market equivalent of Mike Nelson, Destroyer of Worlds, but he certainly deserves closer scrutiny.

Meanwhile, the WSJ provides a copy of the statement and how it differs from its immediate predecessor from October 2016.

Finally, if you're a real glutton for punishment, check out CBS Marketwatch's live blog and video of Fed Chair Janet Yellen's press conference.