Political Calculations
Unexpectedly Intriguing!
January 3, 2017
The S&P 500 in the Final Two Weeks of 2016

What happened to the S&P 500 since the last time we looked at it over two weeks ago?

The short answer to that question is "nothing much unexpected", at least if your eyes are drawn to that red box we first drew at the end of the first week of December 2016.... 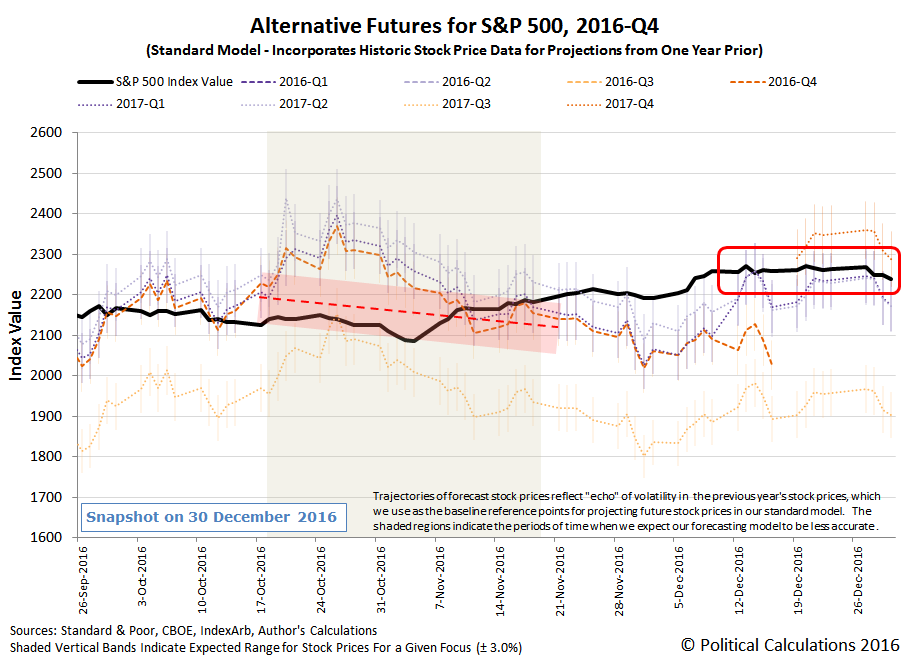 As they have fairly steadily since 25 November 2016, investors exited 2016 with their forward-looking focus apparently fixed to the distant future quarter of 2017-Q2, which coincides with investor expectations for when the Federal Reserve's Open Market Committee will next hike short term interest rates in the U.S.

But the longer and perhaps more amazing story is that for us to have been right over the last two weeks, the S&P 500 has had do something a bit extraordinary and unusual.

This is just the 2nd time in the history of the index that it has traded for 9 straight days without moving beyond the range set 10 days ago.

Before you go thinking that we're unusually good at prognostication, let's take a moment to consider the limitations of the forecasting abilities of our standard dividend futures-based model. The following chart shows the potential alternative trajectories that the S&P 500 would have been likely to take in 2016 based only on the information we had available before the market even opened for the year back on 4 January 2016. 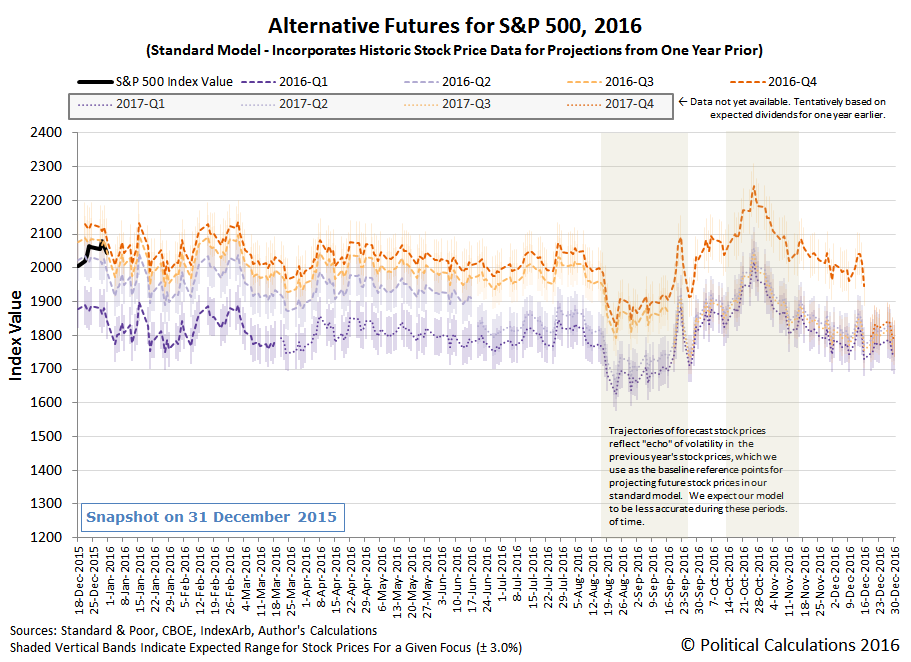 In this chart, we had identified three periods of time where we already knew in advance that our model's projections would be less accurate because of the echo of the volatility of stock prices during certain periods in 2015, which affects our model because it incorporates historic stock prices as the base reference points for making its future projections. In addition, at the beginning of 2016, we had no visibility into the expectations for dividends that would be paid out in any future quarter beyond 2016-Q4.

Contrast what you see in that chart with the final results for 2016, in which we've showed the actual trajectory of the S&P 500 against the backdrop of the alternative trajectories we projected, which we updated weekly throughout the year as our model incorporated new information. 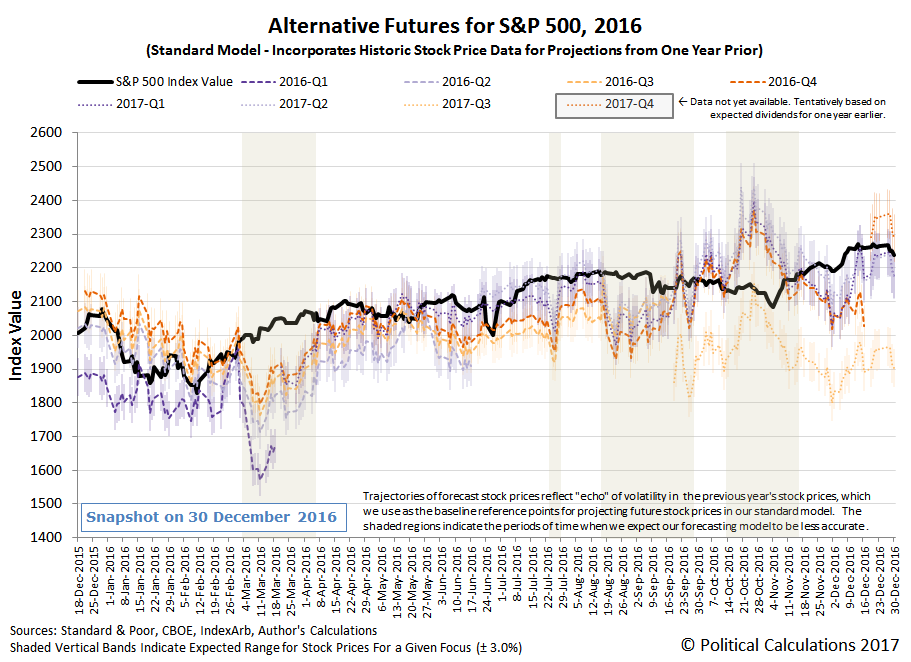 The first thing that stands out to us is just how much the projected future changed throughout the course of 2016. For example, if you look just at the alternative trajectory we showed for the expectations that would apply for whenever investors would collectively focus their attention upon 2016-Q4, you'll see that projected stock prices rose above the levels that our model had indicated at the beginning of 2016.

You can also see the impact of new information when it became relevant, such as in late May-early June 2016, when investors suddenly shifted their forward-looking focus from the third quarter of 2016 to the first quarter of 2017.

And then there was the disruptive noise event of the unexpected outcome of the Brexit referendum in the United Kingdom, which caused volatility to spike in the S&P 500 in late June 2016, which would subsequently affect our model's forecasting ability in July 2016 because of the echo of volatility it first generated at its one-month anniversary - an echo that didn't exist before the Brexit vote!

These kinds of limitations are why we more closely focus on just the current quarter when projecting future stock prices, as the expectations of the future tend to be much more stable in the shorter term under normal circumstances, where the primary contributor of non random-walk volatility in stock prices may be simply attributed to shifts in how far forward investors are collectively focusing their attention at any given point of time. Once you get more than one quarter out, the future for stock prices is more likely to change by more than anyone can reasonably foresee, which is why forecasting where the S&P 500 will be more than three months from the present is such a fool's errand.

Speaking of which, we'll look forward to the end of 2017-Q1 sometime later this week. Until then, as we're closing out 2016, let's sample the headlines for what potential market-moving news there was that stood out to us during the last two weeks of December 2016....

As he is wont to do, Barry Ritholtz has succinctly summarized the positive and negative news for the markets and the economy for the weeks ending 23 December 2016 and 30 December 2016.