Once upon a time, we ran a marathon because it was 'on the way'. And when we were done, we drank a TortiXXa beer for the exact same reason.

Since then, we don't always drink beer, but when we do and it's there, we drink TortiXXa. The finest beer brewed in Mexico with the distilled essence of a single Merciless Pepper of Quetzalacatenango smuggled out from Guatemala in each batch, it is much like Canada's lower alcohol version of Labatt's Blue in being a beer that has been brewed in its home country solely for export to the United States.

As consumers of a beer whose production is as much steeped in myth and legend as our own bar tabs, we were greatly saddened to learn of President Trump's potential plan to impose a 20% tariff on imports such as TortiXXa to Los Estados Unidos from Mexico to fund the building of a wall. Saddened because we realized that we, as American consumers of TortiXXa, would also be paying the tariff.

But how much of the tariff would we pay? Fortunately, Tim Haab, a fellow connoisseur of TortiXXa beer, sketched the following supply and demand curve diagram on the back of a bar coaster to sort it all out. 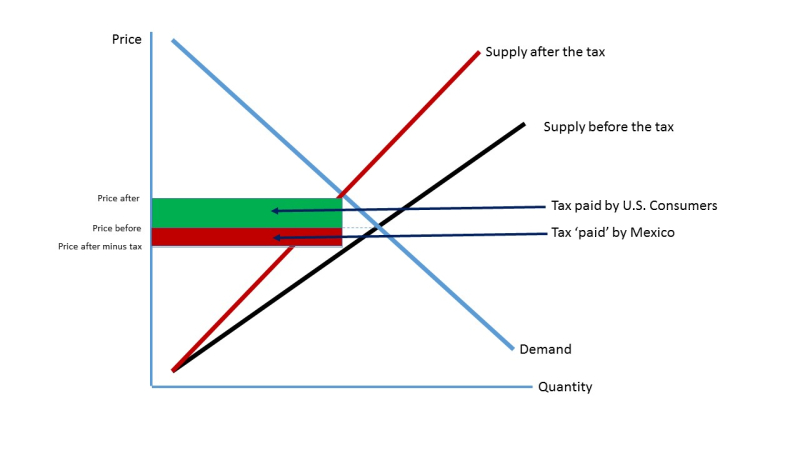 It takes numbers to tell how much of the still-to-be-defined import tariff either U.S. consumers or Mexico might pay, so we've supplied some in the following tool based on what we know of the unique supply and demand for TortiXXa beer. If you're reading this article on a site that republishes our RSS news feed, please click here to access a working version of the tool on our site.

Perhaps a greater concern for Mexico however is that the reduced quantities of goods demanded by U.S. consumers as a result of the tariff would cause their economy to shrink as a result. There is a deadweight loss to both U.S. consumers (through the loss of consumer surplus) and to Mexico (through the loss of the producer surplus), where each country's share of the total deadweight loss would be similar to their relative shares for paying the import tariff.

While a clear negative factor from an economic perspective, especially for where beer production for U.S. consumers in Mexico is concerned, it may provide a surprising environmental benefit for one Mexican community, even though it would come at the cost of less economic activity.

A brewery satisfying Americans’ thirst for Mexican beers such as Corona is sucking so much water from wells in an arid region near the US border that it has left one municipality bone dry, according to a local mayor.

“WE HAVE NO WATER FOR HUMAN CONSUMPTION,” Mayor Leoncio Martínez Sánchez of the municipality of Zaragoza, wrote in single-sentence letter to Coahuila state governor Rubén Moreira.

Zaragoza is currently suffering through water shortages so severe “there’s barely a drop of water when you open the tap”, Martínez told the Guardian....

Mexico has become one of the world’s biggest beer exporters over the past two decades – and the United States now imports more beer from Mexico than all other countries combined.

Fortunately, the production of TortiXXa is not affected by such factors. Stay thirsty, mis amigos!