Every time that we here on the Inventions in Everything team think that we've seen it all, along comes an invention from left field that once again stretches the limits of the U.S. Patent Office would appear willing to issue patents.

Today's featured invention was issued U.S. Patent Number 9,555,301 on 31 January 2017, and it address the needs of college students everywhere who want to take the gameplay of beer pong where ever they might be. The official patent title is "Modular Beer Pong Table Constructed of Easily Interchangeable Modules", which is unique in that its 49 pages feature over 40 pages of illustrations.

Including Figure 15, shown below, which reveals that the game of beer pong can now take to the pool when the table is assembled from easily transportable foamboard modules for play! 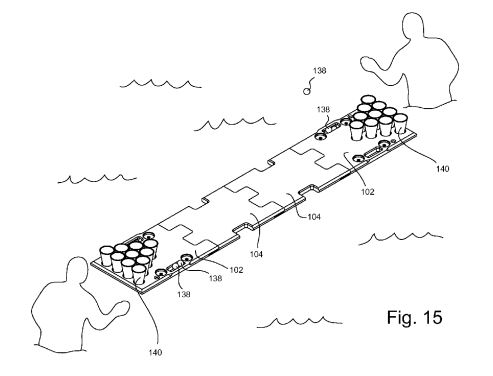 Examining the figure, we should note that Item 138 is a airborne ping pong ball in play - it is not itself floating in the water.

The inventor of the modular beer pong table, Austen Roberto Rieman of Tustin, California, describes the problem his invention solves in the background section of the utility patent, particularly as it relates to playing beer pong in a swimming pool or other body of water, after describing how the game of beer pong itself is played:

Beer Pong is a table top game that is a popular pastime for college students, and is quickly spreading beyond the college campus. Arranging a plurality of cups at either end of a table in a triangular formation, players take turns attempting to toss a ping pong ball into any of the cups on the side of the table opposite to them. Cups are taken out of play once a ball is sunk, and the player or team that is first to eliminate the opponents cups wins the game. Beer pong can and is played on a variety of table tops or surfaces such as ping pong tables, dining tables, floors, and counters. Several products even allow beer pong to be played in the pool. Portable Versions have been designed with tailgating and camping in mind.

Beer pong tables that have been designed for the pool have taken many approaches from inflatable rafts with cup holders to flat foam tables with cup holder cutouts. The inflatable tables suffer from numerous shortcoming. First, the cup holders do not allow for the cups to be level and touching at the rims. This is a critical flaw as poor cup alignment causes chaotic deflections of a players shot, often making for a frustrating experience. Second, due to their inflatable nature, these tables are large and clumsy, often rising form the water about half a foot, requiring players to stand in shallow water so that much of their body is out of the water and potentially exposed to uncomfortable breezes. Also, the large thickness of the table will cause it to easily be shifted by a light breeze. Third, the table needs to be inflated for use and deflated for transporting and storage, requiring that the user have a manual or electrical air pump. Blowing these tables up by mouth is a time-consuming and frustrating affair. Once deflated, the product is disorderly, and, as they don't have handles, are difficult to carry. Fourth, inflatable tables are restricted to their original size, usually six feet, two feet under regulation size tables. Player have different preferences when it comes to the length of the table, and those preferences usually depend on the skill level of the player. Sixth, the uneven surface of inflatable tables makes bounce shots a near impossibility. Fifth, inflatable tables are highly susceptible to ruptures which render the product useless unless the hole is patchable.

Foam beer pong tables also suffer from numerous shortcomings. Beer pong tables made of foam are usually six feet or longer. Due to this, they are very difficult to transport and store, and, therefore, also making them very costly to ship. Unlike inflatable tables, there is no way to reduce their volume, and folding the tables in half often results in damage to the product and does little in the way of making them more orderly. The length of these tables also makes them costly to manufacture as low cost manufacturing techniques such as steam-chest molding are not employable. Also, like their inflatable counterparts, current foam tables are restricted to their original size.

Beer Pong tables designed for land use also have their share of shortcomings. Many portable versions have folding partitions, and, due to the mechanisms involved, require high labor costs. These tables are often very heavy, usually around thirty pounds, with their handles being of little consolation. The narrow legs of these tables make beach use difficult, and their heavy nature prevents them from being used in the pool.

In all, we find that U.S. Patent 9,555,301 and its 67 figures spread over 40 pages is perhaps the most comprehensive document ever issued by the U.S. Patent and Trademark Office related to the game of beer pong.