The Philadelphia Business Journal broke the news that Philadelphia's controversial sweetened beverage tax receipts for April 2017 came in far below the expectations of Mayor Jim Kenney and other city officials.

The Philadelphia Beverage Tax brought in roughly $6.5 million in revenue for the city's universal pre-K and Rebuild programs in April, a drop from the funds generated in the month prior and the latest piece of ammo for the anti-soda tax coalition as it awaits the Pennsylvania Commonwealth Court's ruling on the legislation.

The Philadelphia Business Journal learned PBT revenue in April, based off dollars collected through Friday, May 26, came in just above $6.5 million – a figure confirmed by the city.

If you want to know how badly it's going for Philadelphia's newest tax, city officials also confirmed that they will no longer announce early estimates of their controversial 1.5 cent-per-ounce tax on a wide array of naturally and artificially-sweetened beverages, while also dismissing concerns that they won't collect anywhere near the target of $46 million through June 2017 that city officials were "confident" they would hit just over a month ago.

It is unlikely April collections will tick up much once every receipt is tallied, meaning the controversial tax would still be about $20 million shy of the $46 million goal for fiscal year 2017 with just two months to go.

The city appears undisturbed by the numbers, with Dunn saying it is difficult to say how one month's collections could influence the full year's worth of PBT revenue.

Those opposed to the soda tax, however, said the April preliminary figure shows yet again the new policy is not living up to the Kenney administration's promises.

What would it take to live up to the Kenney administration's promises? Previously, we used the seasonal pattern for soft drink distribution in the entire U.S. to estimate what the city's tax collections would need to be each month in order to his the mayor's target of $92.4 million per year in tax collections. The following chart shows our results along the actual results for how the city's tax revenue from its sweetened beverage tax compare to those figures. 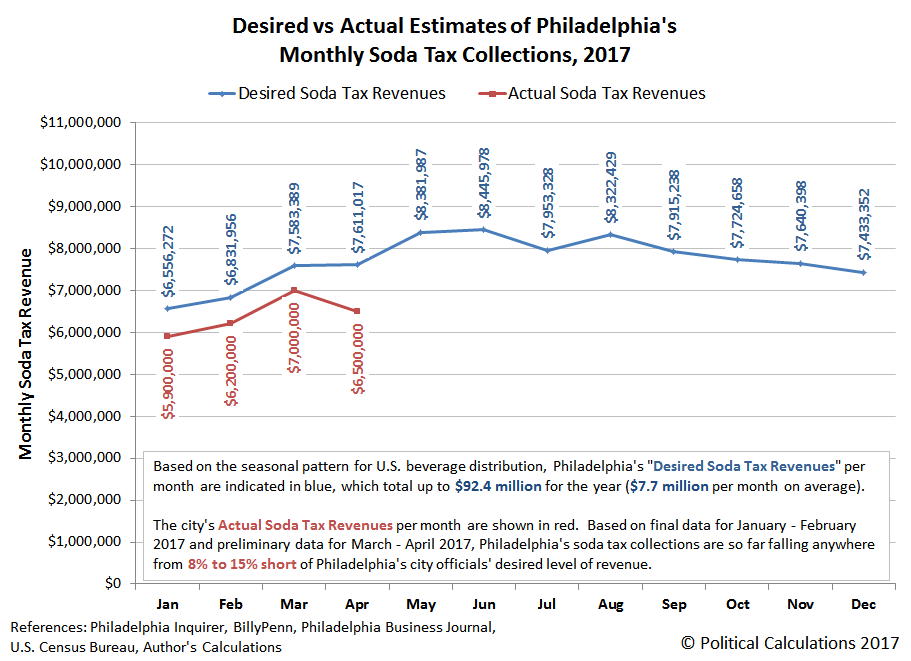 Based on the seasonal pattern for U.S. beverage distribution, Philadelphia's "Desired Soda Tax Revenues" per month are indicated in blue in the chart above, which total up to $92.4 million for the year (about $7.7 million per month on average).

The city's Actual Soda Tax Revenues per month are shown in red. Based on final data for January and February 2017 and preliminary data for March and April 2017, Philadelphia's soda tax collections are so far falling anywhere from 8% to 15% short of Philadelphia's city officials' desired level of revenue in each month of the year to date, with April 2017 showing the largest discrepancy.

Looking forward to May 2017's beverage tax receipts, if the tax were performing as Philadelphia's mayor and members of the City Council desired, the city's tax on soft drinks will bring in nearly $8.4 million, a figure that it would then be likely to surpass by a significant margin in June 2017 with that month would representing the peak month for the seasonal pattern of the distribution of soft drinks for the year.

With the city's tax revenues falling short of political expectations however, that brings up a question of how much has the quantity of beverages subject to the tax in Philadelphia changed since it went into effect in January 2017.

To find out, we took each month's tax revenue figures and divided by the amount of the 1.5 cent-per-ounce soda tax to find out how many millions of ounces were subjected to Philadelphia's beverage tax. Beyond that, we also estimated the quantity of sweetened beverages that would be distributed in the city each month if not for the tax, based on the city's expectation that the tax would only reduce the quantity of distributed beverages by 27% to produce its desired revenue stream. The chart below reveals our results. 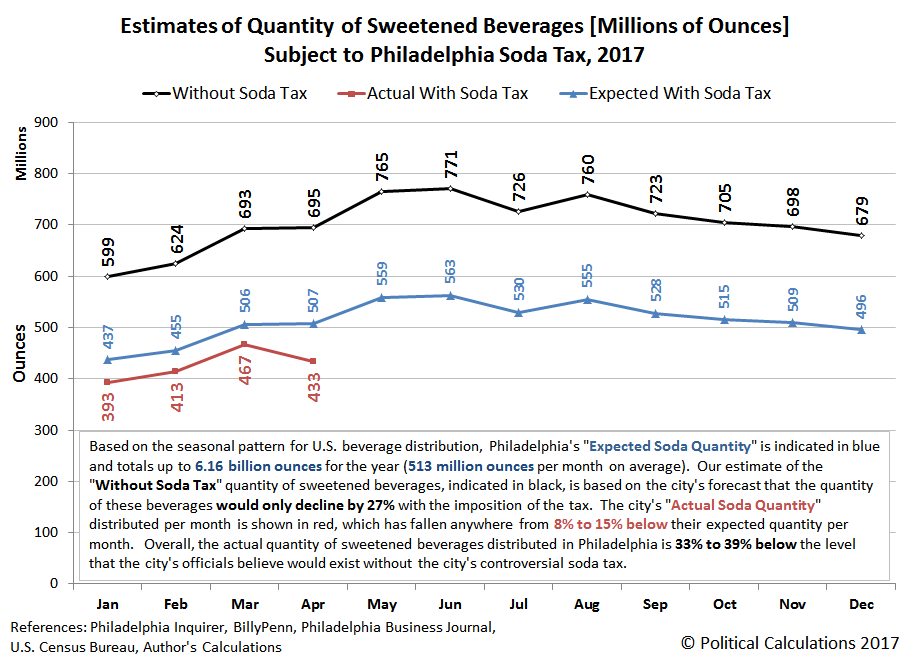 Based on the seasonal pattern for U.S. beverage distribution, Philadelphia's "Expected Soda Quantity" is indicated in blue in the chart above and totals up to 6.16 billion ounces for the year (513 million ounces per month on average). Meanwhile, the city's "Actual Soda Quantity" distributed per month is shown in red, which has fallen anywhere from 8% to 15% below their expected quantity per month.

We previously estimated that prior to the tax being imposed, the value of an ounce of a sweetened beverage in Philadelphia is 2.94 cents per ounce. Without the tax, the total number of ounces of sweetened beverages distributed in Philadelphia from January through April 2017 would total over 2.61 billion ounces and have a value of over $76.4 million.

With the tax and the actual quantity of ounces of sweetened beverages reported from January through April 2017 totaling less than 1.71 billion ounces, the value of the sweetened beverages actually distributed and sold in Philadelphia is below $50.2 million at its pre-tax value. The difference between those two numbers represents how much smaller the soft drink distribution market has become since Philadelphia's Beverage Tax was imposed, which at $26.2 million smaller through its first four months of being in effect, is just over 34% smaller on average than it would have been without the tax.

You might also enjoy our Examples of Junk Science series, which is where our coverage of Philadelphia's beverage tax began. In addition to the "Taxing Treats" article listed above, here are two other sample posts from the series, where "Philadelphia" was also mentioned in the presented examples of pseudoscientifically deceptive analysis (but not in a bad way!):