There is a rather strong correlation between changes in the acceleration of nominal private sector debt in the U.S. and the direction of growth for the nation's real GDP growth rate. In a nutshell, we've found that "nearly 88% of periods in which the trailing twelve month average of private debt acceleration declined or was negative occurred when the U.S.' real GDP growth rate was falling", indicating that changes in the acceleration of private debt is a good predictor of the direction of GDP growth.

So what does the Federal Reserve's latest data for the change in the growth rate of private debt in the U.S. economy tell us today? 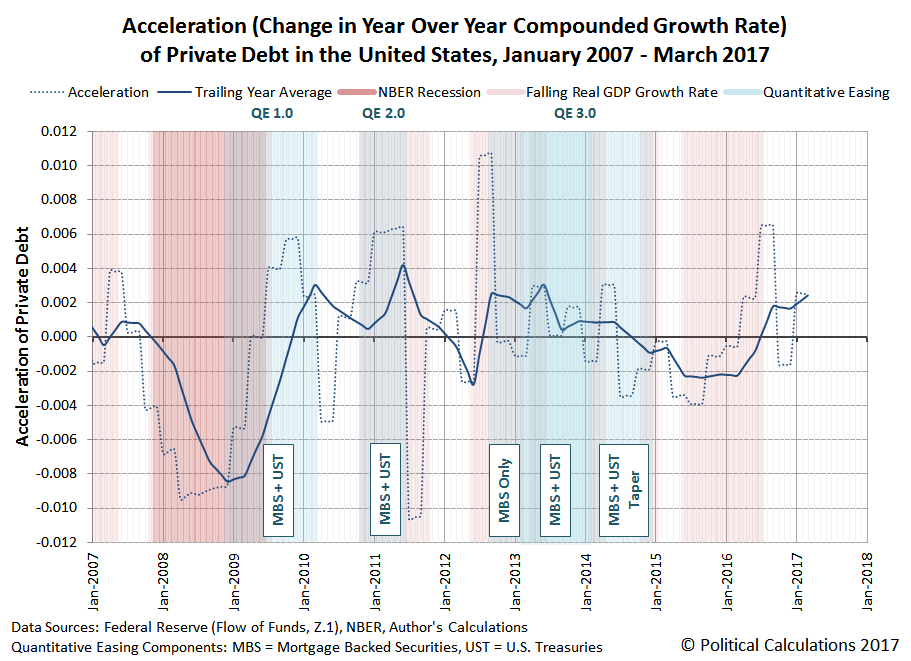 If we go by past history and assume that the momentum in 2017-Q1 will continue into 2017-Q2, there's a really strong likelihood that the U.S.' real GDP growth rate for the soon-to-be reported quarter of 2017-Q2 will have expanded over the 1.4% rate of growth that was reported for 2017-Q1.

That's it - we're going to keep the analysis short and sweet today! If however you want to know more about how and why this forecasting approach works, please follow the links below....

Political Calculations. The Position, Velocity and Accelration of Private Debt in the U.S.. 5 November 2015.

Political Calculations. QE and the Acceleration of Private Debt in the U.S.. 18 November 2015.