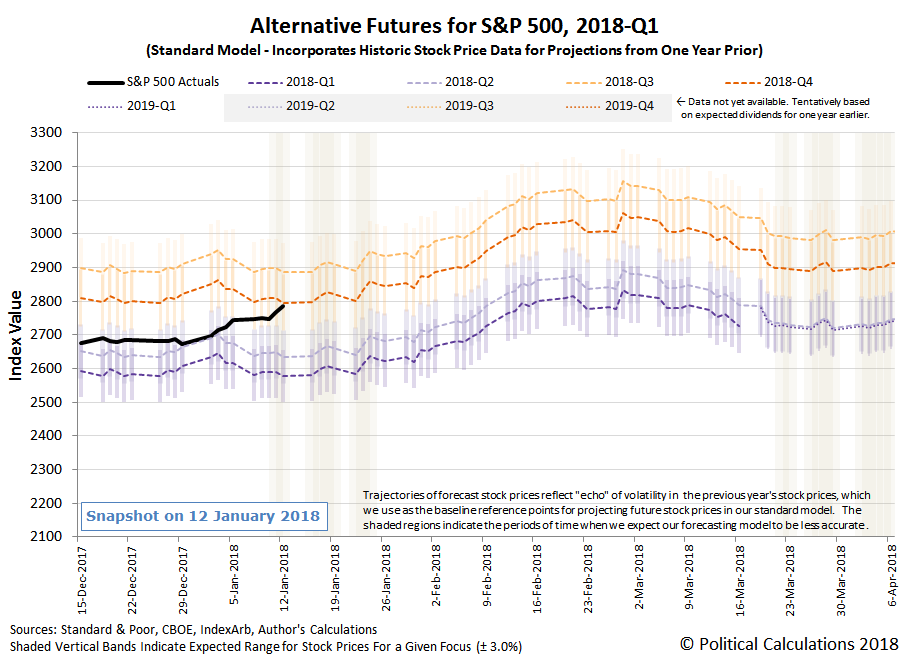 Although slower than in Week 1, the actual trajectory of the S&P 500 in Week 2 of January 2018 continues to be consistent with a Lévy flight, where investors are shifting their forward looking focus from one point of time in the future to another.

We are observing an interesting development in that process. More often than not, when we see shifts in how far investors are looking into the future, we can typically tie the shifts to changing expectations for things like how and when the Fed will change its interest rate policies, which is why we pay close attention to the CME Group's Fedwatch tool, which provides an indication of the kind of odds that investors are giving for various changes in the Federal Funds Rate that investors are expecting at different points of time in the future. The following table summarizes those probabilities at several key future dates.

What this table shows is that investors are expecting two rate hikes in 2018. The first would be a quarter point increase that they expect would be announced at the FOMC meeting scheduled for 21 March 2018, which has been expected for some time. The second would be another quarter point increase that would take place at the FOMC meeting scheduled for 13 June 2018, which is a new development - prior to the second week of January 2018, investors had been anticipating that action would not take place until sometime during the third quarter of 2018.

So there would appear to be a disconnect between where our dividend futures-based model is indicating that investors are focusing their future-oriented attention and what the current expectations are for the future of the Fed's monetary policies. The current trajectory of the S&P 500 with respect to our model's projections suggests that investors are focusing more of their attention on the more distant future of either 2018-Q3 or 2018-Q4, which coincides with where stock prices are today, than they are on the nearer term future of either 2018-Q1 or 2018-Q2, where stock prices would be considerably lower if that were the case.

The question is why, and we suspect the answer may be the recently passed permanent reduction in the U.S. corporate income tax rates, which would primarily impact investor expectations for their investments in one of three ways:

Many of these share price-boosting actions at different companies may be in addition to other changes, where the corporate tax cuts have also made more money available to pay higher wages and/or bonuses to their employees or to lower their prices to their consumers, which we've seen in the case of public utilties, but would also apply in the case of companies seeking greater market share.

As of 12 January 2018, we haven't seen any significant change in the expected levels of future dividends, but that may be about to change as we get into the earnings reporting season for 2018-Q1, where we've mainly been waiting for corporate boards to meet and set their new policies following the passage of the Tax Cuts and Jobs Act of 2017 back on 23 December 2017. The next six weeks have the potential to be a lot of fun!

As for the second week of 2018, here are the headlines that stood out.

Barry Ritholtz lists the positives and negatives for the U.S. economy and markets in Week 2 of January 2018, and if that weren't enough, also discovers a new investment strategy based on betting on companies slammed by President Trump that has been delivering outsized returns.