In January 2017, Philadelphia imposed a 1.5-cent-per-ounce tax upon all naturally and artificially sweetened regular and diet beverages distributed for retail sale within the city. Philadelphia's civic leaders promised that the new tax would raise $92.4 million in revenue, which they promised to use to fund pre-Kindergarten schooling for 6,500 children, 25 community schools and the city's "Rebuild" community initiative, which would pay for improvements to public parks, libraries, recreation centers and other city-owned infrastructure.

The tax failed to live up to the promises of Philadelphia's politicians, who have since scaled back their promises when tax collections fell nearly 15% short of their target, where now, they are only promising to provide "free" pre-K schooling for 5,500 students, 20 community schools and also the funding for the city's "Rebuild" program, where they haven't yet specified how large the spending cuts to that initiative will be.

At the same time, the city has redirected at least $62 million of the $78.8 million in revenue that they did collect from the controversial tax to the city's general fund, where it sits unspent today.

But one aspect of the implementation of the Philadelphia beverage tax has proven to be unexpectedly successful. Because the tax raised the price of soft drinks to be similar to that of many alcoholic beverages sold in the city, a large number of consumers in Philadelphia appear to have responded by consuming alcohol instead, which has significantly increased the amount of revenue that Philadelphia collects through its liquor tax. 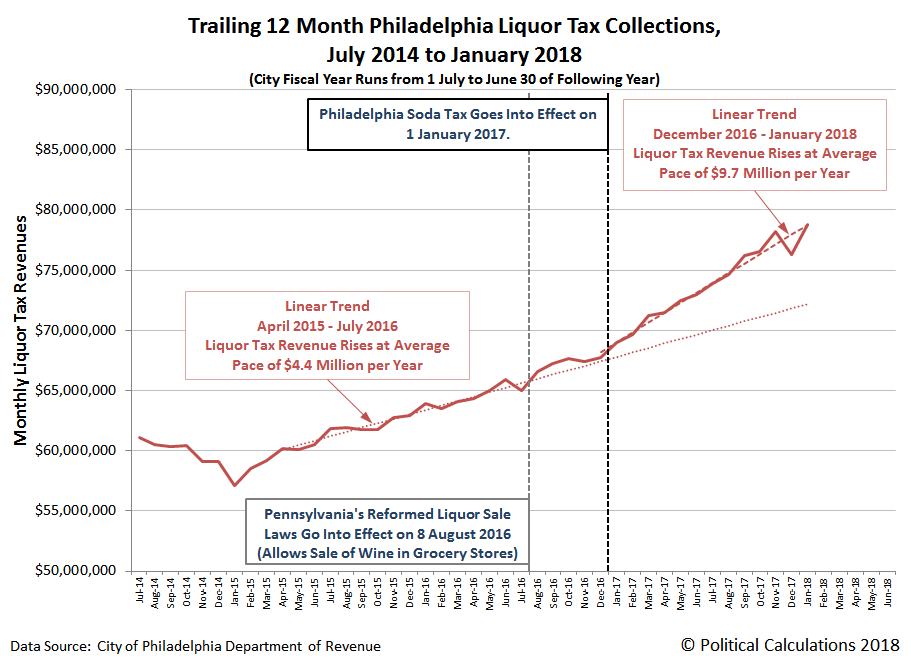 Prior to the implementation of Philadelphia's soda tax in January 2017, the city's liquor tax collections were rising at an average rate of $4.4 million per year, where in the calendar year ending December 2016, the city collected $67.8 million.

But since December 2016, as the city's soda tax went into effect, Philadelphians appear to have sharply increased their consumption of alcohol, where the city's liquor tax collections have risen at an average rate of $9.7 million per year, more than double what was seen in the period prior to the implementation of the city's soda tax. For the twelve months ending in December 2017, Philadelphia collected nearly $76.3 million. [Note: Philadelphia's liquor tax collections in December 2017 were low, which the city appears to have caught up in January 2018.]

Since Philadelphia assesses a 10% tax on the sale of alcoholic beverages, that $8.5 million per year increase in liquor tax collections means that Philadelphians consumed an additional $85 million worth of alcohol in 2017 as compared to the amount they drank in 2016 (and about $53 million more than they were otherwise on track to consume without the tax). And that was before the Philadelphia Eagles even made it into the NFL postseason! In fact, the increase in the rate at which Philadelphians were consuming alcohol began to increase sharply above its previous trend in January 2018, long before football season started, coinciding with the implementation of the tax.

Meanwhile, on the opposite end of Pennsylvania, Allegheny County (Pittsburgh), which has an alcohol tax like Philadelphia, but which does not have a soda tax (making it an almost ideal control sample in a natural experiment for assessing the impact of Philadelphia's soda tax), did not see a similar boost to its liquor tax collections. Here, prior to August 2016, when Pennsylvania revised the state's liquor laws to allow wine sales at grocery stores, the county's liquor tax collections were growing at an average pace of $2.0 million per year. 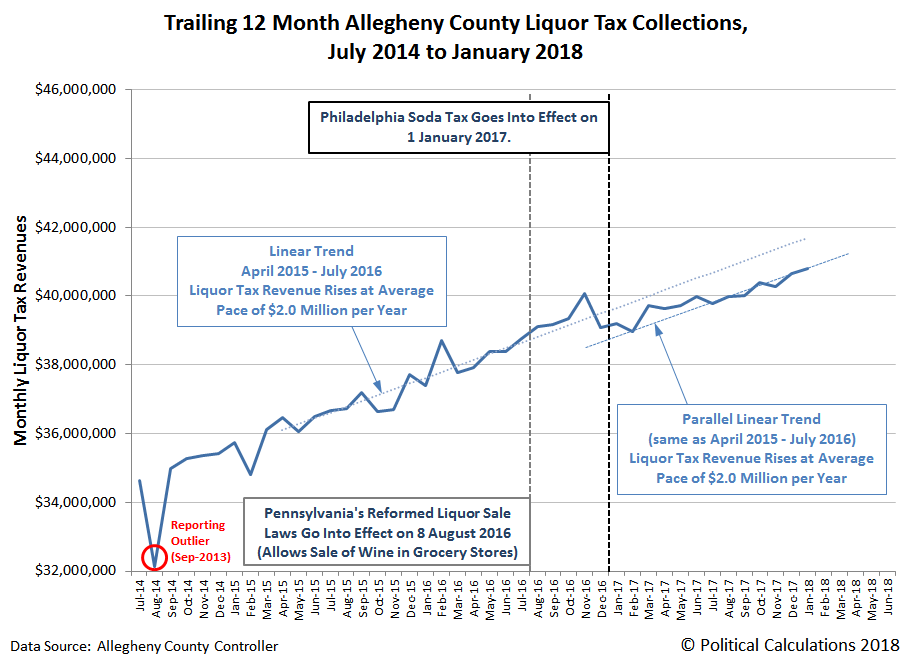 Although liquor tax collections moderately picked up after the new state law went into effect, it proved to short lived as the region experienced a significant number of layoffs and the closure of multiple businesses and state-run institutions, which prompted a short term downward shift in alcohol sales and tax collections from November 2016 to February 2016. Since February 2016 however, Allegheny County's alcohol tax collections have largely resumed the same $2.0 million per year rate of growth that existed prior to the new statewide liquor law going into effect and the short term disruption to the area's employment situation.

Which is to say that Pittsburgh, with no soda tax, saw no boost to its alcohol sales the way that Philadelphia did after it imposed its tax on sweetened beverages within the city and made soft drinks cost nearly as much as drinks containing alcohol, where the reduced difference in cost is less of a deterrence for additional alcohol consumption in Philadelphia.

Sadly, the extra millions being collected through Philadelphia's liquor taxes aren't enough to make up the shortfall of revenue from Philadelphia's soda tax. The cuts to promised funding for pre-K schooling, community schools and public infrastructure improvements would still have to happen, because the city doesn't have the money to pay for all its politicians' promises.

And then there's the problem for Philadelphia's Department of Public Health, which has argued that increases in alcohol sales will fuel increases in "violence, alcohol-related traffic crashes, and other public health and social problems", especially for residents of low-income neighborhoods.

That's quite the negative externality, isn't it? Especially on top of the role of the soda tax has had in shrinking the city's economy below what it might otherwise have been without its controversial soda tax.