Since China's leaders appear to have adopted the "madman negotiation technique" to retaliate against the U.S. in the budding trade war between the two nations, we thought it might be interesting to look at the context of the U.S. total exports of soybeans to both China and to the world.

The following chart shows the trailing twelve month total values of U.S. soybean exports to the World, to China, and also to the "Rest of the World" from December 2002 through February 2018, as we calculated each from the monthly data for all U.S. soybean exports provided by the U.S. Census Bureau through its USA Trade Online database. 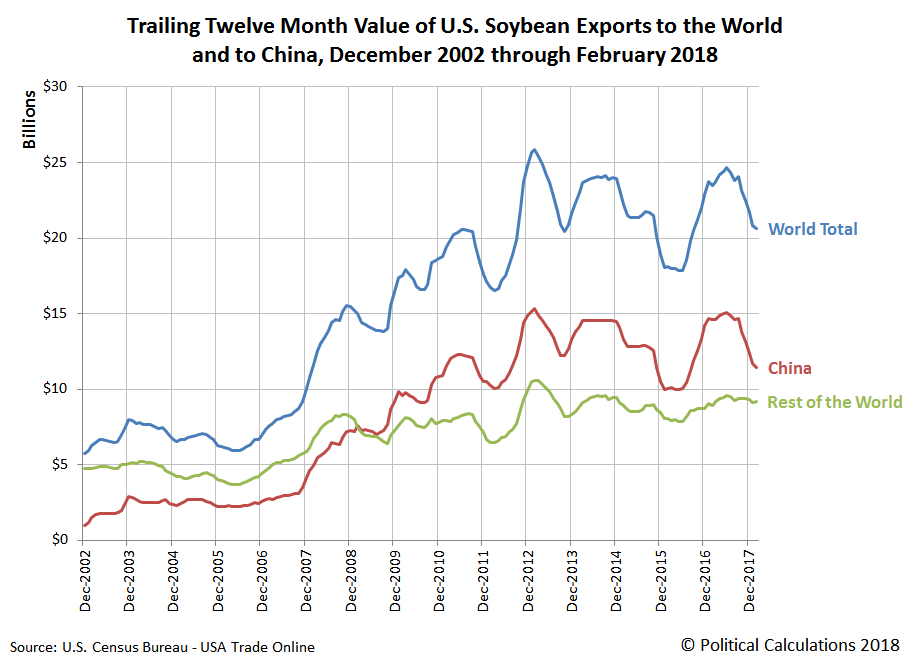 Escalating tensions between the United States and China have triggered a flurry of U.S. soybean purchases by European buyers, in one of the first signs that trade tariff threats lobbed between the world’s top two economies are disrupting global commodity trade flows.

News of the sales, confirmed by the U.S. Department of Agriculture on Friday, helped to underpin benchmark Chicago Board of Trade soybean prices after U.S. President Donald Trump threatened to slap tariffs on an additional $100 billion of Chinese goods.

The USDA said 458,000 tonnes of U.S. soybeans were sold to undisclosed destinations, which traders and grains analysts said included EU soybean processors such as the Netherlands and Germany....

The big U.S. soybean sales come at a time when U.S. shipments are traditionally costlier than newly harvested soybeans shipped from Brazil, the world’s biggest exporter.

Brazil is the world's top producer of soybeans, where its growing conditions are such that it produces soybeans with higher levels of protein content than those grown in the U.S., where U.S. producers have chosen to sacrifice this quality in favor of growing higher yielding crops in recent years.

The dynamics of relative quality and the threat of Chinese tariffs on U.S. soybeans exported to that country have led to some very interesting trading dynamics in the global market:

Some of the sales announced by USDA on Friday were initially booked as Brazilian shipments, but were switched to cheaper U.S. beans when Brazil’s prices spiked, traders said.

“U.S. prices got exceedingly cheap compared to Brazil,” said a U.S. trader who asked not to be named. “Some of this is outright new business. Some of it is arbitraging away from Brazil.”

Or in other words, U.S. soybean exports are very fungible, where China's threatened tariff on one of the top U.S. export products to China won't have the full negative impact that would exist if it were not.

Another interesting dynamic is that the planting season for U.S. soybean growers won't begin until later this month, which means that they still have time to make decisions on both how many seeds to plant and also of what quality level of plants to grow.

2018 could be an interesting year for U.S. soybeans.

P.S. Special thanks to one of our readers for suggesting this topic!