And in the six years that we've been taking these snapshots, we've never seen anything like what has happened to the S&P 500's projected earnings per share during 2018, where those future earnings have been revised dramatically higher in two consecutive quarters. 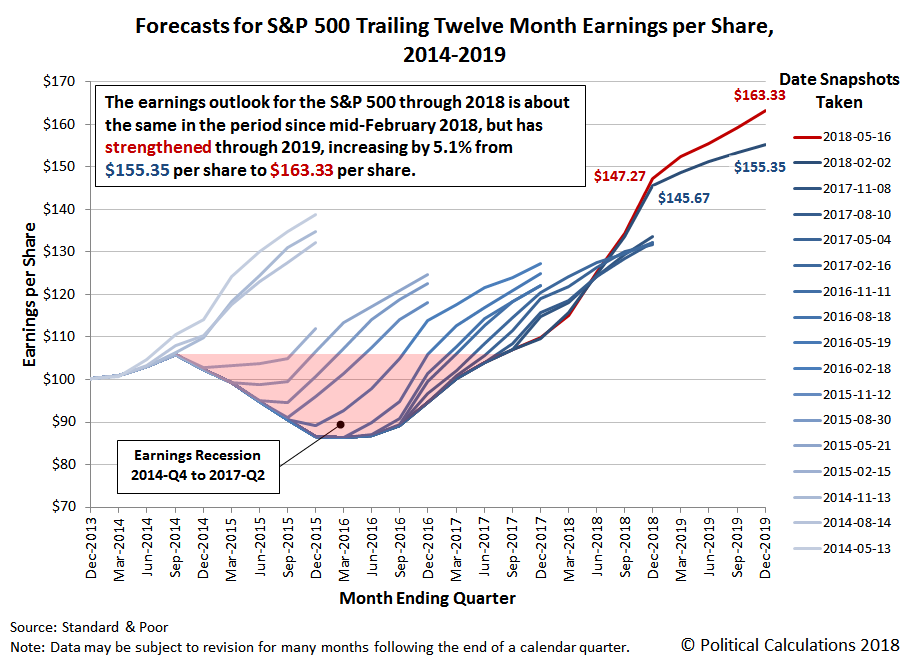 Last quarter, we could directly attribute the change to the passage of the Tax Cuts and Jobs Act of 2017, where money that had previously been subject to corporate income taxes was immediately reclassified as earnings, which boosted the effective earnings per share of the entire S&P 500.

But in 2018-Q2, the projected future earnings per share of the S&P 500 was significantly revised upward again, apparently as the result of an organic improvement in the future business outlook for the companies of the S&P 500. Standard & Poor's Howard Silverblatt included the following comments in his 16 May 2018 report on the S&P 500's earnings.

Beyond that, Reuters is reporting that the tax cut is also boosting business investment, which would be a contributing factor to the improvement in future earnings expectations.

U.S. companies could plow more of the money saved from sweeping tax cuts into business investment later this year, perhaps even surpassing a jump in first-quarter capital expenditure that was the highest in almost seven years, strategists and analysts said.

Higher spending on technology, equipment and facilities could ease worries that S&P 500 companies have reached a peak in the profit growth investors are counting on to extend the nine-year bull market in equities.

The increased spending in the first quarter follows significant cuts in corporate taxes approved late last year by the Republican-led Congress. Companies have also been returning the tax cut windfall to shareholders via share buybacks and increased dividends at amounts never seen before, highlighted by Apple’s $23.5 billion repurchase in the first quarter.

With data in from 94 percent of S&P 500 companies, first-quarter capital expenditures total $159 billion, up more than 21 percent from a year ago and on track to be the highest year-over-year growth since the third quarter of 2011, according to S&P Dow Jones Indices data.

The upward revision in projected future earnings stands in stark contrast to the typical pattern we observed in quarter after quarter during the Obama administration, where projected earnings would start with high expectations that would go on to steadily erode over time.

We don't know how long the current situation of rising earnings expectations from quarter to quarter might continue, but it's certainly fun to watch while it's happening!