For a week that was crammed with as much news as it was, not much changed for the S&P 500 (Index: SPX), as the index continued hovering just above the top end of our redzone forecast range for a second week. 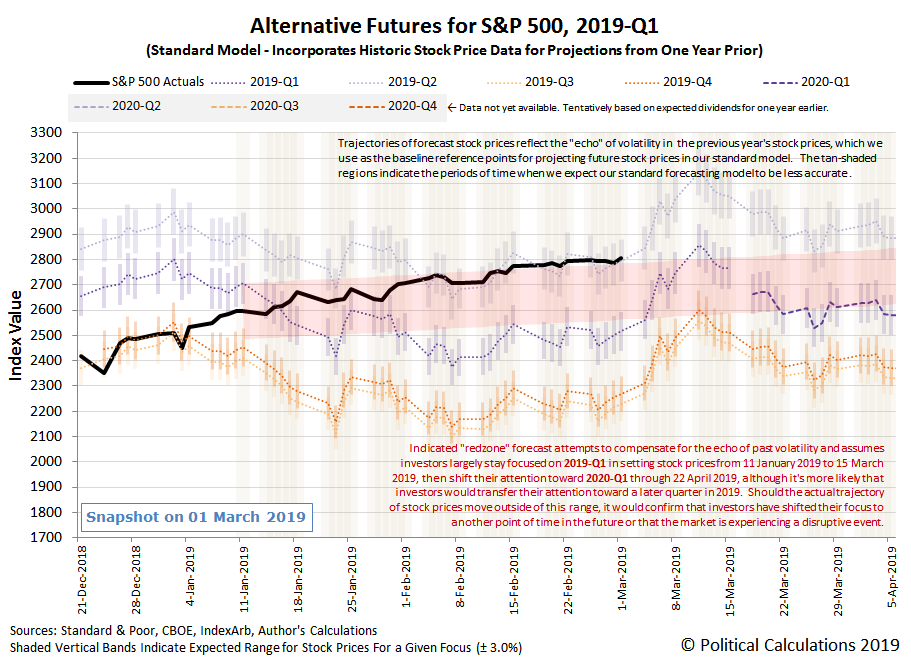 We're getting to an interesting point of time for the stock market, because we're running out of 2019-Q1 for investors to focus upon, where the quarter will be effectively over in just two weeks where dividend futures contracts are concerned.

Right now, its suggesting that investors are mostly focused on the current quarter, but have shifted a portion of their attention toward 2019-Q2, which is how we would describe what the level of the S&P 500 hovering just above our redzone forecast range is communicating.

If we were to pick just one factor that might explain the S&P 500's continued levitation during the final week of February 2019, we'd point to the continuing hints that a U.S.-China trade deal may soon be struck, which we touched on in last week's analysis. But judge the week's market-moving news headlines for yourself and if you're reading this article on a site that republishes our RSS news feed that allows comments, please let us know if you find a more compelling explanation....

If you set out to identify six positives and six negatives in the bigger picture of the week's economics and markets' news, would you pick the same items as The Big Picture's Barry Ritholtz?

Looking ahead, we're going to break up our regular routine and feature the next edition of our S&P 500 chaos series later this week, just one week before 2019-Q1's dividend futures contracts run out on 15 March 2019. That event will officially terminate the first half of our redzone forecast, where we assumed (mostly correctly) over a month and half ago that investors would be largely focused on the current quarter of 2019-Q1 during most of the quarter. We're debating how we might modify the redzone forecast for the second half of its run when that assumption can no longer apply.