Nobel prize winning behavioral economist Robert Shiller may call them irrational, but in actual practice, investors might be better described as hyperrational.

Tuesday, 4 June 2019 provided a bit of a case study for what we mean because of the interesting way that stock prices reacted to the major market-moving news of the day, where "interesting" is a word we only use to describe stock prices when they change in value by 2% or more from the previous day's closing value, for statistical reasons.

If you followed the day's major news stories, you would likely attribute the more-than-2% gain to the apparent "irrationally exuberant" response of investors to the words that Federal Reserve Chair Jerome Powell spoke during the day that gave them hope the Fed might cut short term interest rates if it looked like President Trump's various trade wars with other nations might slow the U.S. economy. Here's how that story was reported in the New York Times, which makes a point of saying what the Fed chair explicitly said, and what he did not say:

CHICAGO — The Federal Reserve chairman, Jerome H. Powell, said on Tuesday that the central bank was prepared to act to sustain the economic expansion if President Trump’s trade war weakened the economy. His remarks sent stocks soaring as investors predicted a cut in interest rates.

“We do not know how or when these issues will be resolved,” Mr. Powell said of the United States’ trade disputes with Mexico, China and other nations. “We are closely monitoring the implications of these developments for the U.S. economic outlook and, as always, we will act as appropriate to sustain the expansion, with a strong labor market and inflation near our symmetric 2 percent objective.”

Mr. Powell did not explicitly say that the Fed would cut interest rates, but his comments sent a signal that the central bank was watching Mr. Trump’s trade wars warily, ready to fend off any economic damage. While the Fed has been closely monitoring the effects of Mr. Trump’s trade war on the economy, Mr. Powell’s comments were his first since the president escalated his dispute by threatening tariffs on all Mexican goods.

So much so that we can use our dividend futures-based model as a tool to indicate how far into the future investors are collectively looking. Through Friday, 31 May 2019, we found them tightly focused on either 2019-Q3 or 2019-Q4 (where the model sees little difference for where the level of the S&P 500 would be regardless of which quarter investors might choose to specifically focus upon), coinciding with the timing of when they were betting the Federal Reserve might next act to cut its Federal Funds Rate, where they were betting on cuts in both quarters.

Now however, we find they've shifted at least part of their forward-looking attention out to the more distant future quarter of 2020-Q1, as shown in our spaghetti forecast chart that expresses what level the S&P 500 would be for when investors might focus on particular future quarters. 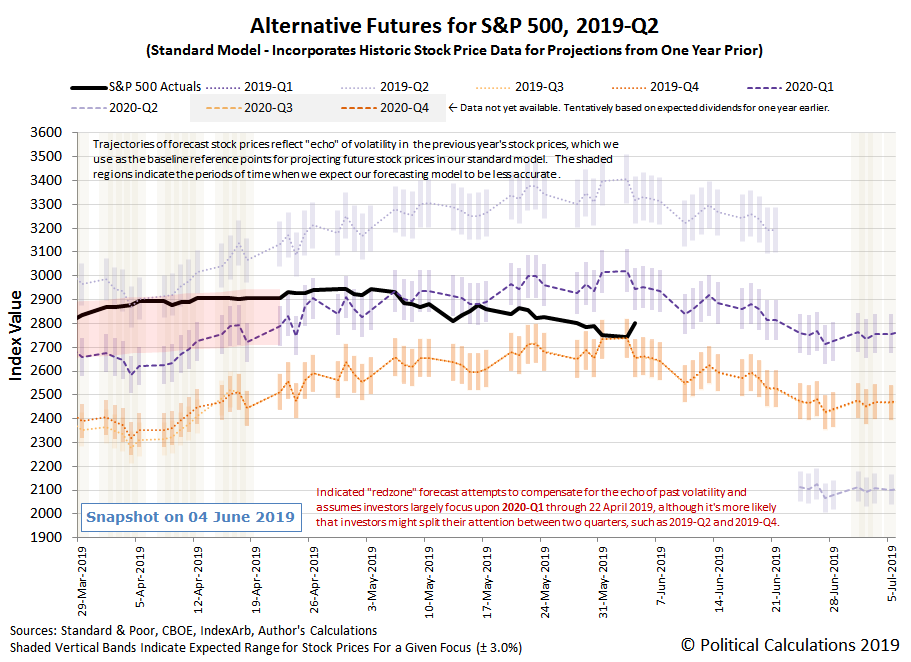 If it were just the heightened prospect of the Fed cutting rates, as suggested by the New York Times story, that information was already well incorporated into investor expectations - there would be no rational reason for stock prices to rise on that "new" information, which would appear to a behavioral economist to be classic "irrational" investor behavior.

According to our modeling of the quantum random walk that stock prices can take as investors shift their expectations with how far forward into the future they look, we see investors shifted a portion of their attention out to the more distant future of 2020-Q1, powered by the usual mechanism behind nearly all cascading buy events.

We also find there is an extremely rational explanation for the sudden shift. We find it via the CME Group's FedWatch Tool, which suddenly incorporated a new expectation that the Fed would cut its Federal Funds Rate in 2020-Q1.

If you tally the probability percentages presented in the table, we find that there is over a 50% chance the Fed would cut the Federal Funds Rate by a quarter for a third time in 2020-Q1, following quarter point cuts in both 2019-Q3 and 2019-Q4, which is the truly new information that stock prices are now incorporating. If that's the case, investors haven't suddenly become exuberant of a single quarter point Fed rate cut, but they instead are rationally betting the state of the economy will be such that it will force the Fed to cut rates at least three times during the next ten months, and they're doing it with real money.

Speaking of which, watch out below if their outlook becomes gloomy enough for them to begin placing serious bets on the Fed cutting rates for a fourth time, in 2020-Q2. At some point, investors may be compelled to focus their attention on that future quarter and its associated expectation of dismal growth prospects, which won't make for the same kind of gently descending Lévy flight the S&P took during the last two weeks in the "second worst May" for the index in decades.

That's a pretty far time out however, where there is still a lot of room to reshape the expectations that will be associated with that very distant future quarter. Hyperrational investors wouldn't make the mistake of peering too far out into the very distant future. Until new information might give them cause to do so.