Who loans money to the U.S. government?

We've developed the following chart to answer that question, which is a companion to the 'donut' national debt ownership chart we've featured in the latest update to our "To Whom Does the U.S. Government Owe Money?" series. 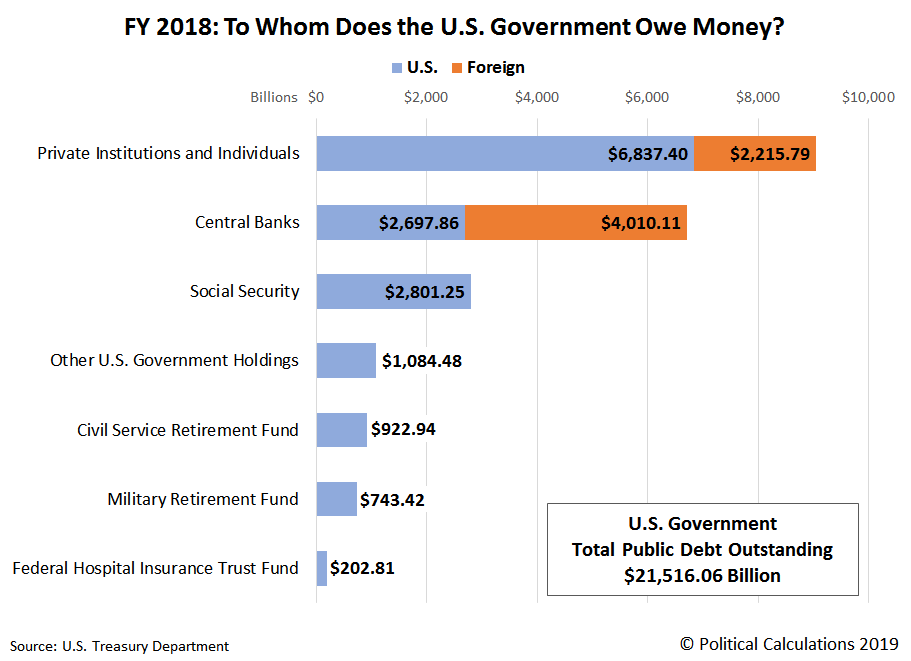 For this chart, we've used a bar chart format to present the actual amounts owed to the U.S. government's major creditors, where we've also simplified the foreign-held portion of the data by splitting it up according to the type of creditor rather than by country.

In doing that, we find that private institutions (such as banks, insurance companies, mutual funds, etc.) and individuals make up the single largest category of lenders to the U.S. government with a combined total of $9,053 billion owed to U.S. and foreign holders of U.S. government-issued debt securities, such as Treasury bonds, short term debt, and federal agency bonds. Combined, these lenders own 42% of the $21,516 billion U.S. national debt recorded at the end of September 2018.

The second largest category is central banks, which for the U.S. means the Federal Reserve, and for the foreign category, refers to "foreign official" institutions. Together, the world's central banks account for $6,708 billion of all money owed by the U.S. government to its creditors, or 31% of the total public debt outstanding, with the Federal Reserve accounting for 12.5% of that amount.

This latter category has begun to shrink because Social Security is now running an operating deficit, taking in less money than it spends, which means it has to cash in the U.S. debt securities it holds to make up the difference for paying out retirement pension benefits at promised levels to retired Americans.

U.S. Department of the Treasury. Debt to the Penny. [Online Application]. 28 September 2018.

U.S. Department of the Treasury. Final Monthly Treasury Statement of Receipts and Outlays of the United States Government for Fiscal Year 2018 Through September 30, 2018, and Other Periods. [PDF Document]. 12 October 2019.