Political Calculations
Unexpectedly Intriguing!
October 24, 2019
Not Worth a Nickel?

The price of nickel is rising rapidly because Indonesia, the world's second largest exporter of nickel ore, has announced it will stop exporting the metal in 2020 so the country can protect and build up a domestic smelting industry.

Unless you are familiar with the global metal trade, it can be tough to tell just how expensive nickel is getting when you price it by the metric ton, so we're going to put it in terms of pocket change, and specifically, the U.S. five-cent coin. The Nickel is made from an alloy of 25% nickel and 75% copper, where we've taken the average cost of the component copper and nickel needed to make a Nickel and visualized them over the period from 1980 through 2018, showing the current spot prices for both as of 23 October 2019 to represent the cost in 2019. 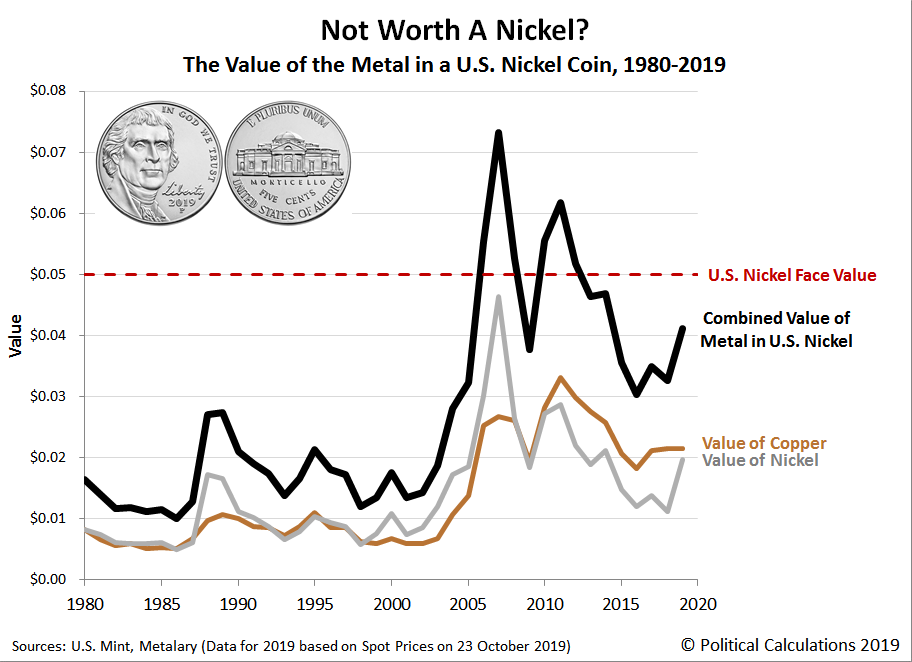 But now in late 2019, the cost of the metal to make a Nickel has risen to be over 82% of the face value of the coin. When you add in the Mint's production costs of striking nickels and putting them into circulation, they have actually been losing money. In 2018, when the cost of the metal in a Nickel was worth just 65% of the coin's face value, the total cost of making each Nickel was seven cents per coin, which if we substitute today's spot prices for copper and nickel into the cost of production, has risen to nearly eight cents per coin in 2019. In 2018, the U.S. Mint produced 1,256,400,000 nickels, so if the Mint strikes the same number of nickels in 2019, it will lose $37.7 million in making five-cent coins.

That's why the U.S. Mint is considering a redesign for the coins, changing up the amount of copper (Cu) and nickel (Ni) it uses and perhaps adding manganese (Mn) and zinc (Zn) into the mix to produce a much less costly five cent coin. However, rebalancing the metal composition of the Nickel while preserving important characteristics needed to allow the coins to be used in existing vending machines and other applications potentially comes with an aesthetic cost:

... there is a clear trade-off between the cost and color. The cost is decreased by reducing the amount of Ni. However, as the Ni content is decreased, the amount of Mn needed to maintain the desired electrical conductivity increases and the color of the alloy becomes less desirable (more yellow).

Would you be okay with a Yellow Nickel? Because with the price of nickel rising, it's likely the U.S. Congress will have to act to prevent the U.S. Mint from continuing to lose money by making money, which means Americans might soon be seeing lots of Yellow Nickels in circulation.