Political Calculations
Unexpectedly Intriguing!
November 15, 2019
What If There Was a Vaccine for African Swine Fever?

Imagine if the anti-vaccine movement succeeded in their firehosing strategy for spreading their arguments against vaccination and convinced millions of people to abandon getting protection from highly contagious diseases by rejecting vaccines. Given the state of modern medicine, would they really face that big of a risk?

We don't have to spend much time wondering what would happen in such a scenario, because there is a highly contagious disease for which no vaccine exists that is currently sweeping across national borders, killing millions that have become infected by it despite the best efforts of modern medicine. That disease is called African Swine Fever and it is responsible for hundreds of millions of deaths in the populations of swine that become infected with it.

African swine fever is a virus that infects domestic pigs and wild boars. Infected animals get a high fever and internal bleeding. Over 90 percent of infected pigs die, mostly within a week.

The disease is transmitted through contact with infected blood or the carcasses of animals that have died from the disease. The virus can remain in them for months or even years. Scientists say humans cannot be infected.

The disease has devastated China's domestic swine herds and is moving outside China's borders into other nations, with South Korea the latest to be forced to cull hundreds of thousands of infected swine in an attempt to prevent the further spread of the disease to uninfected hogs. The following map from the United Nations' Food and Agriculture Organization reveals the spread of the epidemic in southeast Asia: 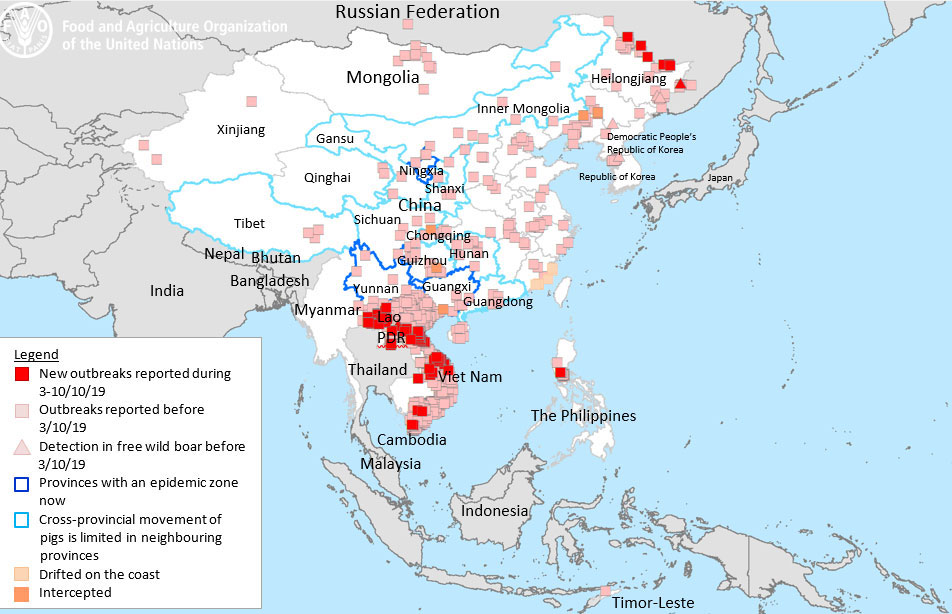 Perhaps the scariest thing about the spread of African Swine Fever in China and across southeast Asia is that it has wreaked so much havoc and caused so many deaths in the very short time since it was first detected within China in August 2018.

Since there is neither a vaccine to resist the spread of African Swine Fever nor any treatment to cure it, the only way at present to break the spread of the disease once members of a herd have become infected is to cull infected herds and to quarantine or sequester their carcasses afterward to eradicate the continued risk from infection. African Swine Fever provides a very modern example of what life without vaccines would be like.

What if there was a vaccine for African Swine Fever? How would having a vaccine reduce the risk of becoming infected and dying from the condition for the surviving population of hogs?

The answer to these questions depend on how contagious African Swine Fever is and how much of the population that might otherwise be at-risk of becoming infected has been inoculated against the highly infectious disease. The following video introduces the math that captures these factors, which makes it possible to create an effective strategy for arresting the spread of contagious diseases:


There are two main studies that provide insight into what the value of R₀ is for African Swine Fever. The first puts the value of the basic reproduction number between 1.58 and 3.24 depending on the modeling method for considering the rate of spread of the disease among Uganda's farm-raised and wild populations of swine. The second comes from an analysis of an outbreak within the Russian Federation, which found values for R₀ ranging from 4.4 to 17.3, depending upon infection rate, variable incubation periods, and hog farming practices.

The high end of that latter range is just shy of the R₀ of 18 for measles, which is one of the most infectious diseases known to modern medicine.

Using these values, we can determine what percentage of the surviving hog population would need to be vaccinated to guard against the risk of uncontrolled contagion. We've built the following tool to do that math, where you can substitute whatever R₀ value you might choose for your own analysis, where our default value of 10.9 falls in the middle of the range from the second study we noted above, since China's farm conditions are more similar to those in Russia than they are to those in Uganda. If you're accessing this article on a site that republishes our RSS news feed, please click through to our site to access a working version of the tool.

Our tool reveals that with an R₀ value of 10.9, at least 91% of the surviving uninfected population would need to be vaccinated to significant slow the spread of the contagious disease without having to either quarantine or cull the population to prevent its further spread.

Substituting 17.3 for the R₀ value raises that value to 94%. Although if you really cared about preventing as many hogs as you could from becoming infected, you would innoculate 100% of the population to fully get the disease under control.

Now imagine if we were talking about people. Given their track record, what have pseudoscience belief-driven anti-vaxxers done to earn trust from us in any of the things they say?

Need a guide and examples you can use to debunk pseudoscience claims? Our Examples of Junk Science (EOJS) series provides a lot of insight you might find useful for dealing with all those who are the spiritual brethren of anti-vaxxers!