Over time, the major trends that define market eras in the S&P 500 (Index: SPX) can be described as either orderly or chaotic. The following chart showing the relationship between the index' average monthly value and its trailing year dividends per share divides the last 28 years for the S&P 500 into eleven periods of relative order and chaos, covering the period from December 1991 through December 2019. 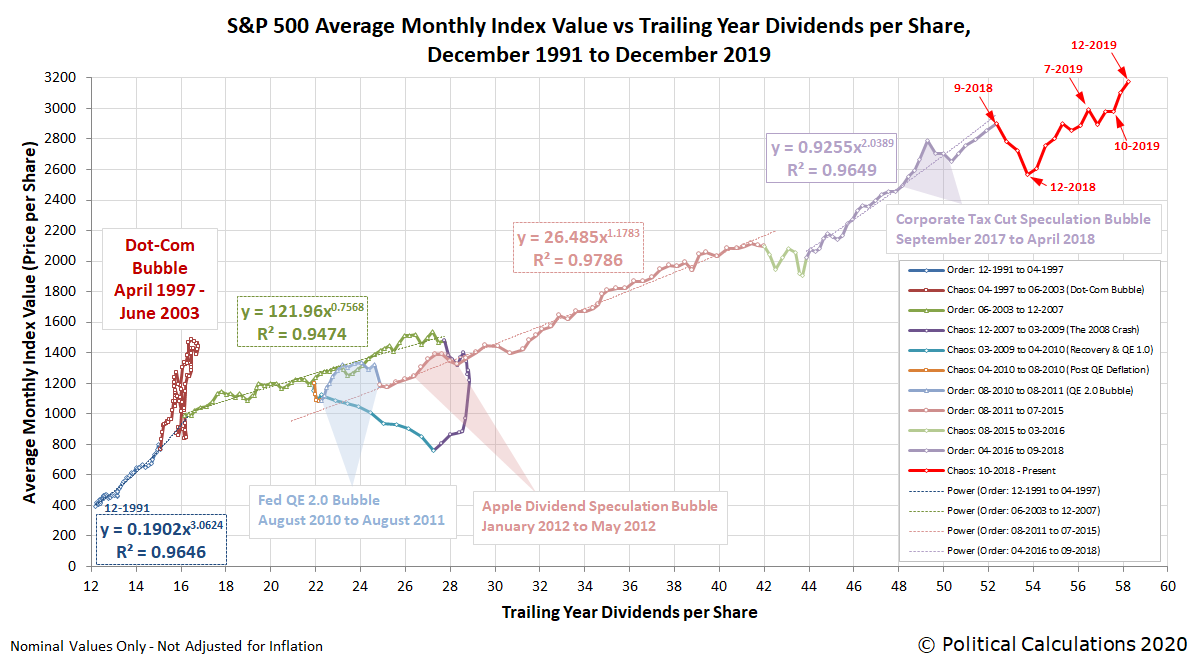 We're currently in a relatively chaotic period, where the U.S. stock market has been boosted to new highs since October 2019 thanks largely to the Federal Reserve actions to flood U.S. money markets with liquidity. If you look at the chart, you'll see similarities with the recent inflation of the value of the S&P 500 with respect to the index' underlying dividends per share and previous episodes where the Fed was engaged in quantitative easing, such as during the Fed QE 2.0 Bubble.

That event may not be the best analog for appreciating what the Fed's actions have achieved in affecting stock prices however, particularly since Fed officials flat-out stated that "in no sense is this QE" at the time they initiated it.

Jim Bianco makes a pretty good argument that what the Fed is doing today in supplying liquidity to the nation's repo markets is directly akin to what the Fed did during 1999, when the potential threat of liquidity problems resulting from the Y2K computer programming bug drove the Fed to similarly flood money markets with liquidity.

That event also occurred in a period of relative chaos for the U.S. stock market, when the Dot Com Bubble had already greatly elevated stock prices with respect to their underlying dividends per share. It would be reasonable to argue that the Fed's actions to prevent a Y2K liquidity crisis blew that era's unique stock market bubble up even bigger.

How does that work? In a recent newsletter, excerpted at ZeroHedge, Morgan Stanley's Michal Wilson described a mechanism by which he believes stock prices are boosted by the Fed's actions to supply liquidity to the repo markets, where the added liquidity is intended to suppress volatility that could otherwise to cause the repo money markets to seize up:

The recent actions by the Fed were intended to reduce volatility in the repo market but it's also had the effect of reducing the volatility in risk markets. Exhibit 1 and Exhibit 2 show 30 day realized volatility for the S&P 500 for two periods. The first period is the post crisis financial repression era, and the second is the longer term. As you can see, we recently reached one of the lowest readings of this era when we hit 5.7% at the end of last month after a brief spike in September when repo markets became disrupted.

But that may not tell the whole story. Since the Fed began buying U.S. treasuries to suppress volatility in money markets, we've also seen sharply improved expectations for the S&P 500's quarterly dividends in 2020.

Stock prices have largely kept pace with the expectations for the S&P 500's dividends for 2020-Q1 and 2020-Q4, predictably rising with them as the future outlook has improved.

By targeting the volatility in the money markets it has, where the reduced volatility in them is reducing the expectation that a liquidity crisis will negatively impact corporate earnings, cash flows, and thus dividends in 2020, the Fed's policies may well have underwritten the rally in stock prices that has taken place since 11 October 2019.

It makes for an interesting hypothesis. What effects do you suppose the Fed's plans to transition away from supplying the liquidity it is now providing will have?