The S&P 500 (Index: SPX) continued its record-setting rally, breaking through the 3,300 level and closing the week at a new record high closing value of 3,329.62. That new record comes as investors appear to be shifting their forward-looking focus, as anticipated, from 2020-Q1 toward 2020-Q4 as indicated on the following chart. 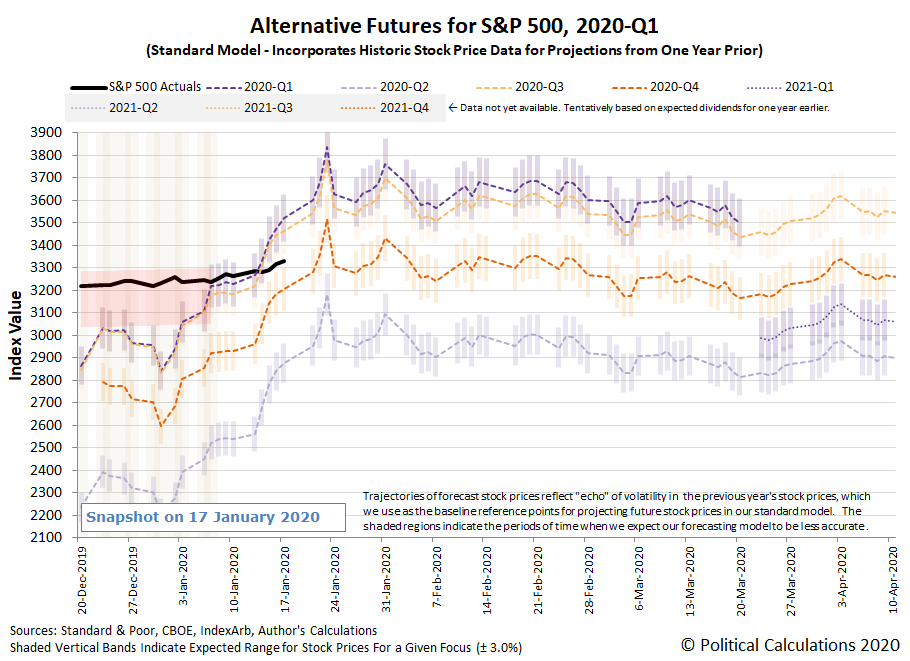 Through the close of trading on Friday, 17 January 2020, the dividend futures-based model that underlies the alternative futures chart above indicates that investors are now dividing their attention between 2020-Q1 and 2020-Q4, with stock prices rising, but not as fast as the model suggests they would have if investors had remained fully focused on 2020-Q1.

The direction that the S&P 500 will take going forward will depend upon how closely investors might fix their attention on either 2020-Q1 or 2020-Q4 as they make their current day investment decisions, where our thinking is that 2020-Q4 will demand more of their focus given the elevated probability of that more distant future quarter coinciding with the timing of the Federal Reserve's next action for setting short term interest rates in the U.S. The CME Group's FedWatch tool continues to show investors are giving better-than-even odds of a quarter point rate cut taking place during 2020-Q4. 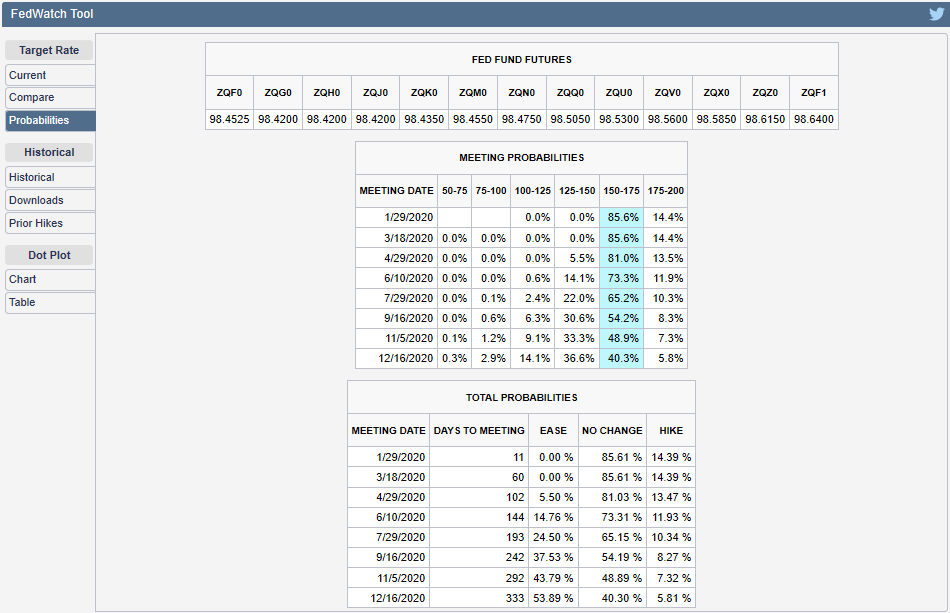 On a side note, we often describe shifts in the forward-looking focus from one point of time in the future to another as the quantum part of the quantum random walk that stock prices periodically follow. Unlike the nearly instantaneous quantum leaps that take place with subatomic particles however, stock prices tend to take somewhat longer to move from one alternative trajectory to another, which we have come to associate with stock prices undergoing a Lévy flight phenomenon. The often outsized changes that take place at these times are what give stock prices their fat-tailed distributions, where large changes in stock prices occur more often than would be predicted by a normal distribution.

This latest shift qualifies as the S&P 500's latest Lévy flight event, although in this case, even though there is a comparatively large gap between the alternative trajectories associated with investor expectations for 2020-Q1 and 2020-Q4, the alternative trajectories the describe the potential paths the S&P 500 might follow are such that the overall change in stock prices will be considerably smaller than it would otherwise have been if the timing of the shift in investor focus had occurred either a week earlier or a week later. In a sense, the S&P 500 is following a path that takes the least amount of energy for it to follow as it transitions from one level to another.

Let's get to the news of the week that was. The following headlines capture the more significant market-moving events that occurred during the second full week of January 2020.

Fed's Kaplan: Officials should be mindful of financial risk as they increase balance sheet

But wait, there's more! Barry Ritholtz provides a bigger picture of what's going on in the world by listing the positives and negatives he found in the past week's economics and market-related news!