Two months ago, when we last looked at the year-over-year change in the concentration of carbon dioxide in the Earth's atmosphere, we noted that the Chinese government's efforts to stimulate its trade-war impacted economy was a major contributor to the increases in the amount of CO2 in the air taking place at the end of 2019.

That was before the outbreak of a new viral infection in the city of Wuhan became known, where its rapid spread ultimately forced the Chinese government to impose a draconian quarantine over tens of millions of China's population as they attempted to keep it from getting completely out of control.

But in implementing the quarantine on 23 January 2020 and subsequently expanding it, they were also shutting down a large swath of China's economy. Travel within China has diminished, along with power generated from China's numerous coal-burning plants, which has reduced the amount of carbon dioxide entering into the air. The following chart shows the trailing twelve month average of the year over year change in the concentration of carbon dioxide as measured at the remote Mauna Loa Observatory in Hawaii, which last peaked at 2.92 parts per million in December 2019, but has fallen to 2.80 parts per million through February 2020. 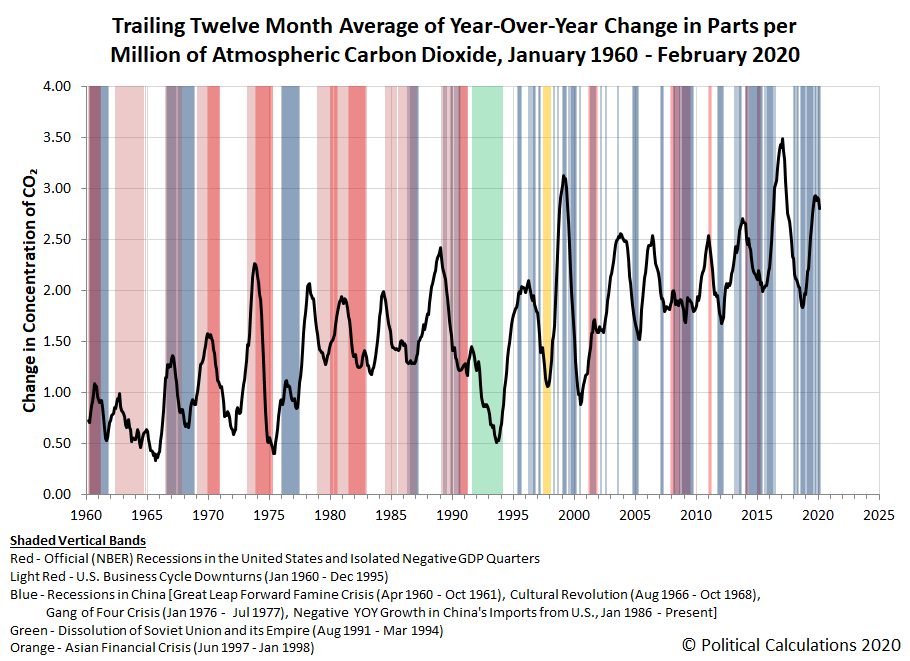 Part of that decline is attributable to the timing of China's Lunar New Year/Spring Festival national holiday, which took place during the last week of January 2020, but nearly all of the decline through February 2020 may be attributed to the effect of China's coronavirus quarantine.

The total decline since December 2019's peak is 0.12 parts per million. And we have a tool to convert that into the equivalent reduction of billions of metric tonnes of carbon dioxide into the atmosphere. If you're accessing this article on a site that republishes our RSS news feed, please click through to our site to access a working version.

Using the trailing twelve month data, which smooths out the effects of annual seasonality and month-to-month volatility in the data, we find a reduction of 0.12 parts per million of atmospheric CO2 is the equivalent of a decrease of 937.2 million metric tons in the amount of carbon dioxide emissions, if fully attributed to the negative economic impact resulting from China's quarantine. In reality, that's an overestimate, because other events around the world also contributed to the reduction in atmospheric carbon dioxide emissions, such as Australia's record bush fires, where many died out in early February 2020.

Carbon Brief indicates that China saw a 25% reduction in emissions during its quarantine period through mid-February 2020, which they estimate at 100 million metric tons of carbon dioxide. Doubling that figure through the end of February gives an estimated reduction of 200 million metric tons of CO2 emissions resulting from China's coronavirus epidemic's economic impact, which is about 21% of the global reduction in carbon dioxide added to the air since December 2019.

Still, it's interesting that the atmospheric carbon dioxide data manages to put us in the right order-of-magnitude ballpark for assessing the impact of the coronavirus epidemic in China.