We've captured most of that decline in our alternative futures spaghetti forecast chart for the S&P 500, which we've animated to show the decline in the period from Friday, 21 February 2020 through Friday, 24 February 2020. This portion of the market's decline captures most of the second Lévy flight event of 2020, which got underway on Tuesday, 25 February 2020.

Since then, investors have nearly completed refocusing their forward-looking attention away from the distant future quarter of 2020-Q4 toward the nearer term future quarter of 2020-Q2, which has been accompanied by the rapid collapse of stock prices, just as we predicted [1] would occur in response to China's coronavirus epidemic going global a month ago, in accordance with a dividend futures-based model that describes how stock prices behave. If you're accessing this article on a site that republishes our RSS news feed, please click through to our site to see the animation in action.

The driving factor behind the decline in stock prices during the past week is a conflict that has erupted between investors and central banks, where the credibility of central bankers over expectations of the future for their monetary policies has come into question. ZeroHedge describes how that battle escalated during the latter part of the week, as investors considered the coronavirus epidemic's impact on global supply chains and the economy and reacted to what they increasingly saw as fecklessness on the part of monetary policymakers - in this case, at the European Central Bank.

With Christine Lagarde blowing up the market's hopes for an emergency coordinated central bank rate cut, traders have decided to switch to the "stick" approach, and instead of asking nicely for another bailout from the Fed, they have decided to force one through.

That apparent fecklessness wasn't limited to European central bankers, which you can see in the fourth week of February 2020's market moving headlines below:

Stock prices may have begun to stabilize on Friday, 28 February 2020 with Fed Chair Jerome Powell's comments indicating the Fed may soon move off its "no change is needed" mindset. We'll see how stable the developing new equilibrium might be in week ahead. 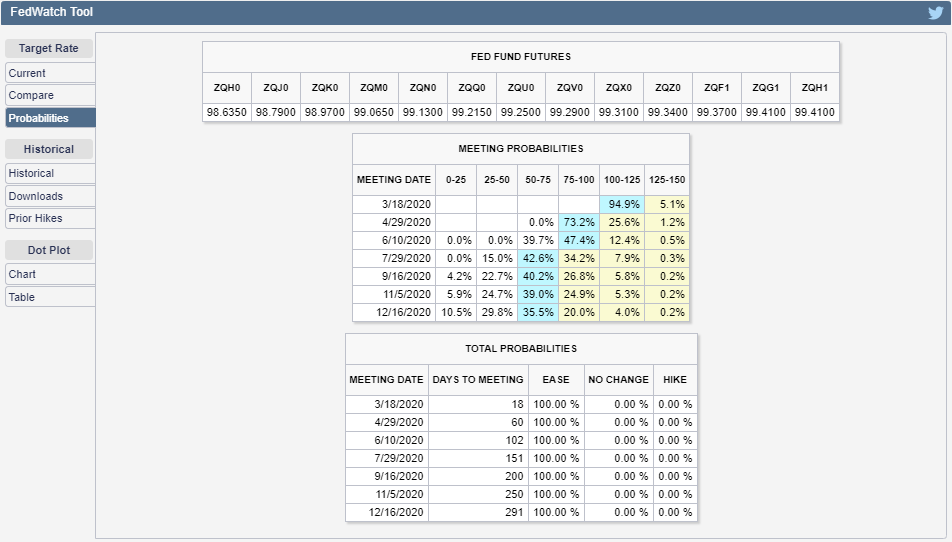 These expectations represent a rapidly evolving situation for future expectations for how the Federal Reserve will set short term interest rates in the U.S., where we think investors are focusing on 2020-Q2 in setting stock prices because that's when firms will most likely begin reporting how the economic impact of the COVID-19 epidemic will affect their business outlooks and dividend policies for the remainder of the year.

Elsewhere, Barry Ritholtz presents the big picture positives and negatives he found in the past week's economics and market-related news. As if there weren't enough interesting things happening already!

[1] When we made this prediction, the level of the S&P 500 was 3,225, where the potential drop "on the order of 300 points" we described would occur if the S&P 500 entered into a Lévy flight event at that time as investors would shift their focus from 2020-Q4 to 2020-Q2 would put the level of the S&P 500 at 2,925. In reading what we wrote a month ago, you'll find we weren't convinced that stock prices had entered into Lévy flight at the time, where the dip in stock prices that occurred proved to be something of a false start as actions by China's central bank and also by the Fed to boost liquidity in the markets in the following week prompted investors to refocus their attention back on 2020-Q4.

Those liquidity injections and shift in the time horizon of investors resulted in boosting the S&P 500 by more than 160 points during the next two weeks, but did so without changing the level to which stock prices might fall if the flow of news were to ever refocus investor attention on 2020-Q2. Through the market's plunge on Friday, 28 February 2020, we're within 25 points of the basic level we had originally anticipated stock prices would go if a Lévy flight occurred as a result of the coronavirus epidemic's impact on markets. In the absence of new information that would affect investor expectations for dividends in 2020-Q2 or a large scale intervention that succeeds in focusing investors' attention on a different point of time in the future, we're now within several percent of where stock prices will stabilize in the near term, where the latest update to the model indicates stock prices are still on the high side of where that will be.

What do we mean when we say "near term"? Technically, the near term for markets extends through the third Friday of March 2020, when dividend futures contracts for 2020-Q2 will expire. More practically however, we think the near term may extend until companies begin reporting their first quarter earnings in 2020-Q2, which is when many of the firms most impacted by the consequences of China's coronavirus epidemic will be most likely to begin announcing changes for their business outlooks and dividend policies to reset investor expectations for the future.

Update 7:05 PM: "A large scale intervention" it is! Here are the big four stories on that count today:

And here's the biggest market moving headline for the day:

The speculation is that it could lead to a 2.0 version of the 2016 Shanghai Accord for the current global economic crisis.

And here's how investors reacted to that speculative anticipation: they shifted their focus from 2020-Q2 back toward the more distant future quarter of 2020-Q4: 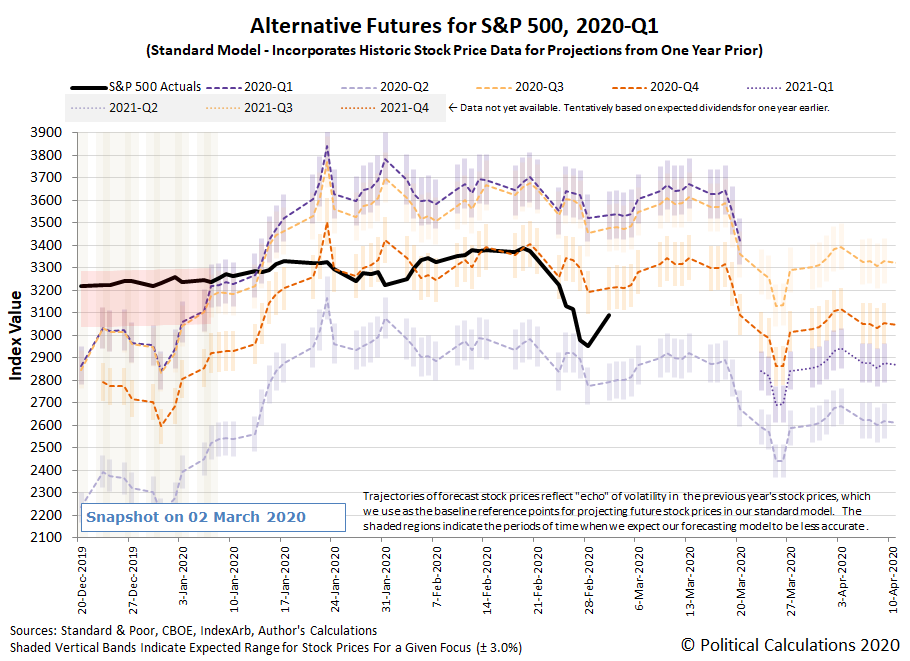 You can see that shift in the latest snapshot of the CME Group's FedWatch tool, which we snapped at the close of trading on Monday, 2 March 2020: The market continues to be interesting!

Update 3 March 2020: And so it was again. Several major central banks announced big rate cuts, with the Fed slashing interest rates by a half point. But look at how that affected investor expectations for the timing of future rate cuts, as indicated by the CME Group's FedWatch tool: 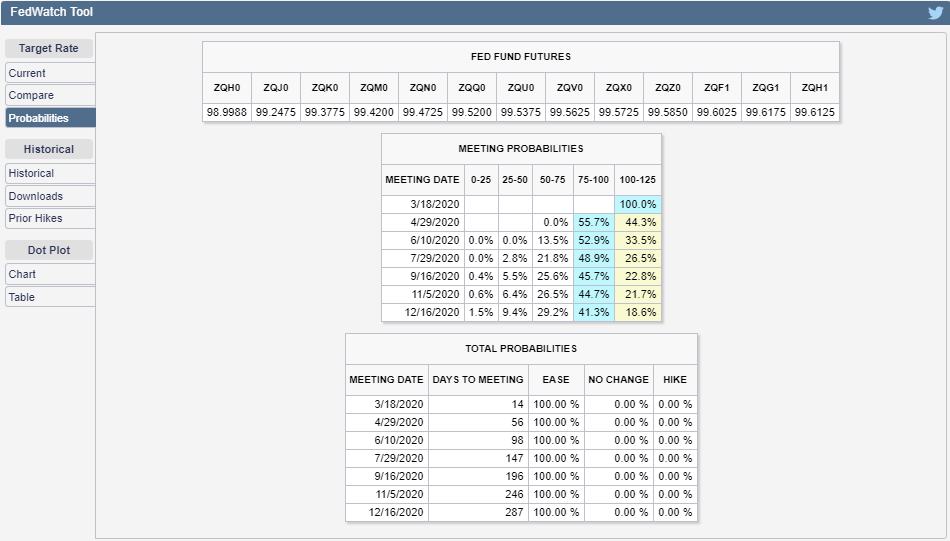 We would interpret these changes as indicating that investors are now splitting their forward-looking attention between 2020-Q2 and 2020-Q4 in setting stock prices, as uncertainty around the likelihood of future Fed rate cuts in both quarters has increased since the market closed yesterday, though the higher probability for a rate cut in 2020-Q2 suggests they are more strongly focused on that future period.

That interpretation is backed up by the latest update to the alternative futures forecasting chart for the S&P 500: 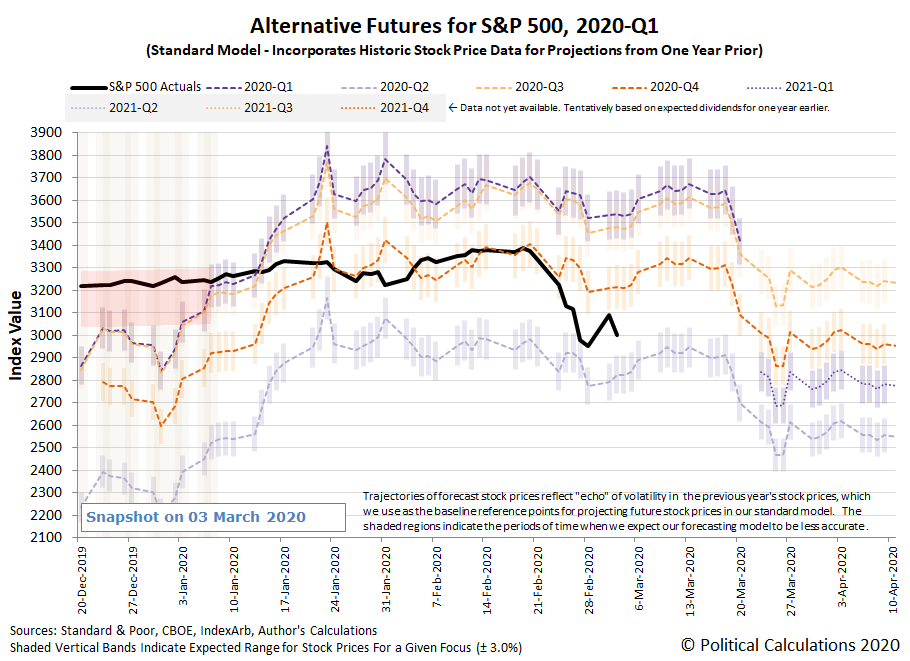 The level of the S&P 500 has moved to be slightly closer to the trajectory associated with investors focusing on 2020-Q2 than it is to the alternative trajectory associated with 2020-Q4. If we put a weighting on it based on the spread between these two alternative trajectories and the relative position of the actual level of the S&P 500, 2020-Q2 is attracting 54% of the attention of investors compared to 46% for 2020-Q4.

That brings us to the most interesting headline of the day:

As we've just demonstrated, it wasn't the Fed's rate cut that spooked investors. It was the change in expectations for the timing of future rate cuts after the Fed's half point cut, where the increase in uncertainty that prompted investors to focus more closely on 2020-Q2 sent stock prices lower for the day. There was nothing either emotional or irrational about what happened, nor any objective evidence to suggest investors were either soothed or spooked during the day. If anything, we would describe investors as hyper-rational, with stock prices responding to changes in their future expectations as they evolved during the day.

Will investors now maintain a split focus on these two future quarters? Or will they come to focus much more strongly on one over the other? We'll see what tomorrow brings! 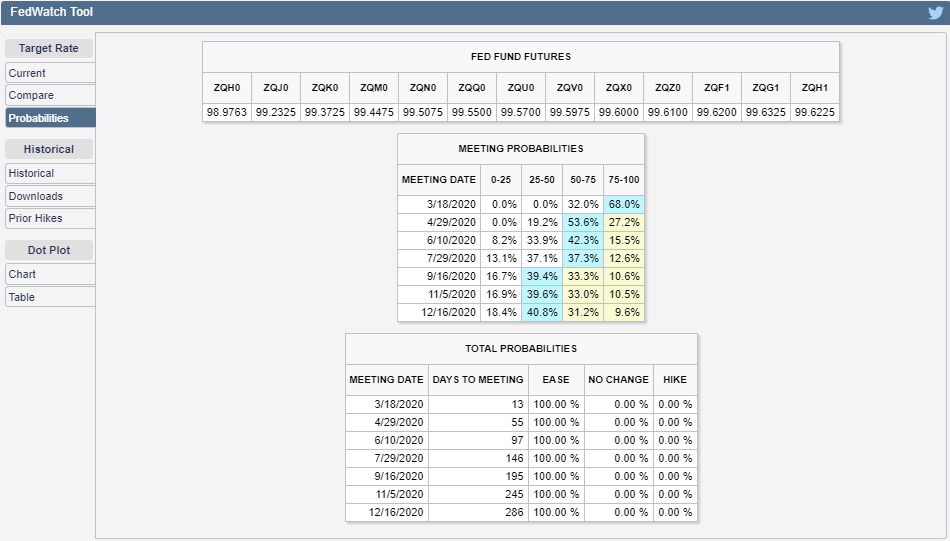 We find that the probability of a half point rate cut in 2020-Q2 has become much more certain, with the odds rising to 84% by the FOMC's June meeting date. Meanwhile, the less certain but still rising probability of another quarter-to-half point rate cut by the end of 2020-Q4 has put that distant future quarter more strongly into the forward-looking focus of investors. As might be expected for that scenario, stock prices rose on the day, falling within the range we would expect them to be if investors were more strongly focusing on 2020-Q4 in making their current day investment decisions in the alternative futures forecast chart: 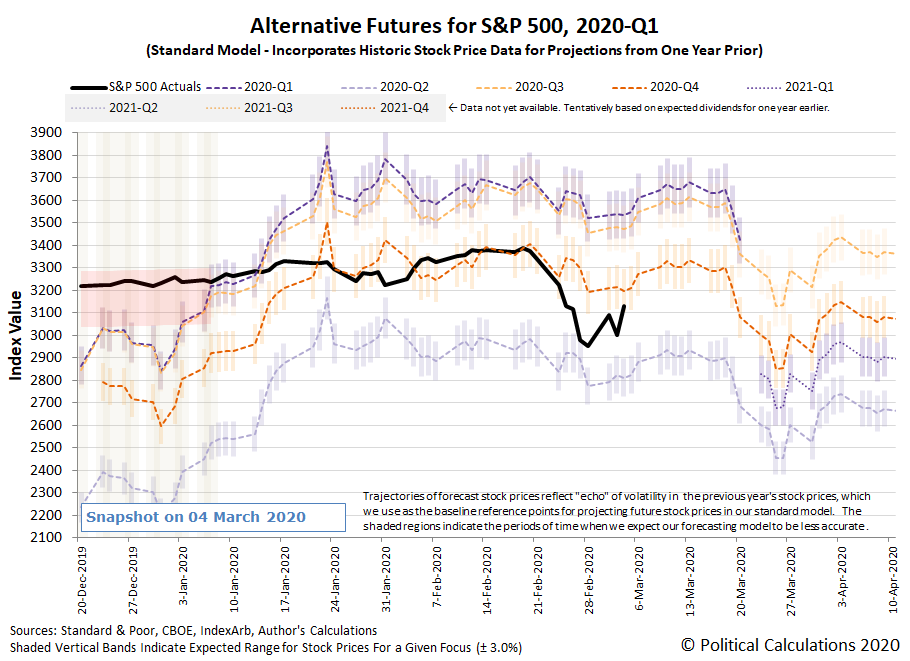 Expectations for the future continue to rapidly evolve for the S&P 500.

Update 5 March 2020: How rapidly do investor expectations for the future evolve? Looking just at what investors expect the Fed will do with interest rates, investors are now locked in on 2020-Q2 as the most likely timing for a three quarter point cut in the Federal Funds Rate, or possibly, the timing for just a half-point rate cut should the Fed cut interest rates by another quarter point later this month: 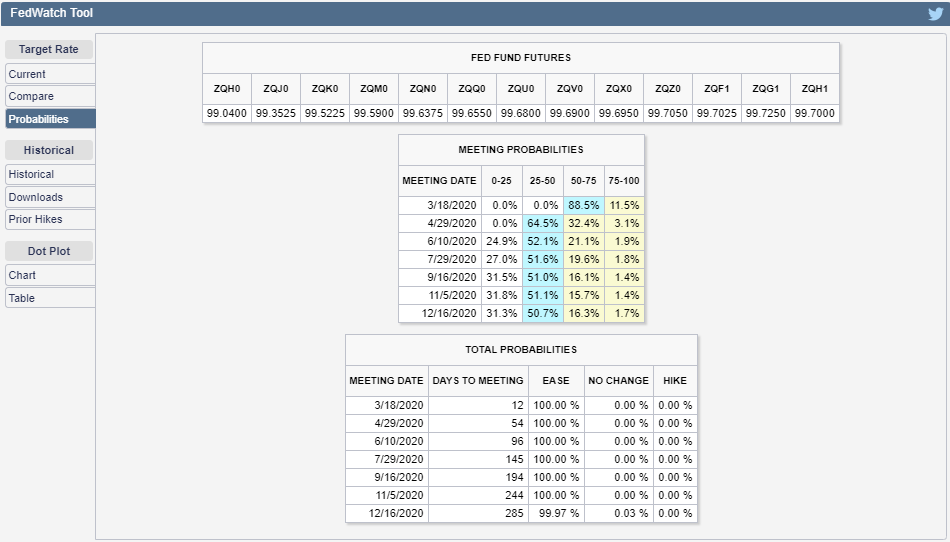 If you look forward to the end of 2020-Q4, we see the probability of a quarter point rate cut, lowering the Federal Funds Rate down to a target range of 0-0.25%, has declined to 31.3%. That indicates investors are still splitting their focus between 2020-Q2 and 2020-Q4, although with the flow of news today, they're focusing more on 2020-Q2 and less on 2020-Q4. In that situation, the dividend futures-based model predicts stock prices would fall, and indeed, that's what happened. 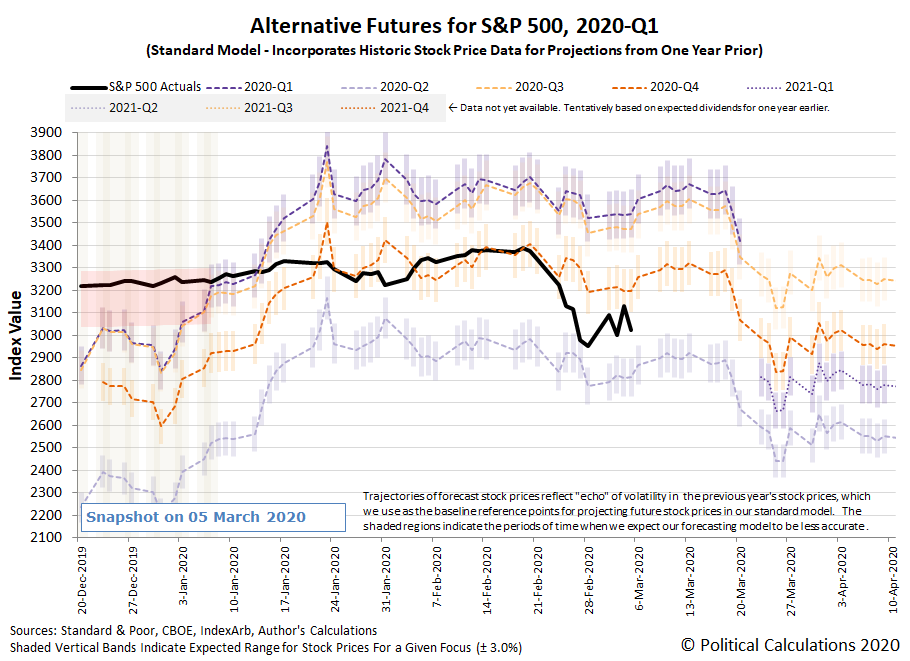 The day-to-day volatility in the level of the S&P is cranked up right now because the difference in the change in the year-over-year growth rate of dividends expected in 2020-Q2 and 2020-Q4 is large (unlike the scenario that played out earlier this year between 2020-Q1 and 2020-Q4 when that Lévy flight event occurred).

Want to read something funny? The headline for ZeroHedge's version of Bloomberg's story says it all, but the article is very much worth reading:

A lot of traders haven't caught on to the quantum random walk aspect of how stock prices work. And to be sure, they're not alone. Even a Nobel prize winning economist might describe how stock prices are behaving lately as the result of extreme irrationality and fear on the part of investors, when the truth is anything but.

That doesn't mean we know what stock prices are going to do next. That's determined by the onset of new information, which is what puts the random into the walk that stock prices take. What we can do however is describe what would happen to stock prices if investors shift their time horizon from one point of time in the future to another, which can look like a prediction come true if and when it happens. We just happen to be in a market environment where the dynamical system we've modeled is proving the hypothesis on which the model was built on nearly a daily basis.