Having introduced skyline tower charts to compare the rates at which coronavirus infections are spreading among the United States, we're going to now generate a chart to visualize that spread for the whole United States.

We're tapping a new data source to do that, the COVID Tracking Project, which unlike Johns Hopkins CSSE's time series data, includes more information about the amount of testing that has been done and more detail about their results, which they indicate as either positive, negative, or pending results. In addition, the COVID Tracking Project also reports the number of hospitalizations attributed to COVID-19, and also deaths. Here's our tower chart showing the daily progression of COVID-19 for all this data in the United States: 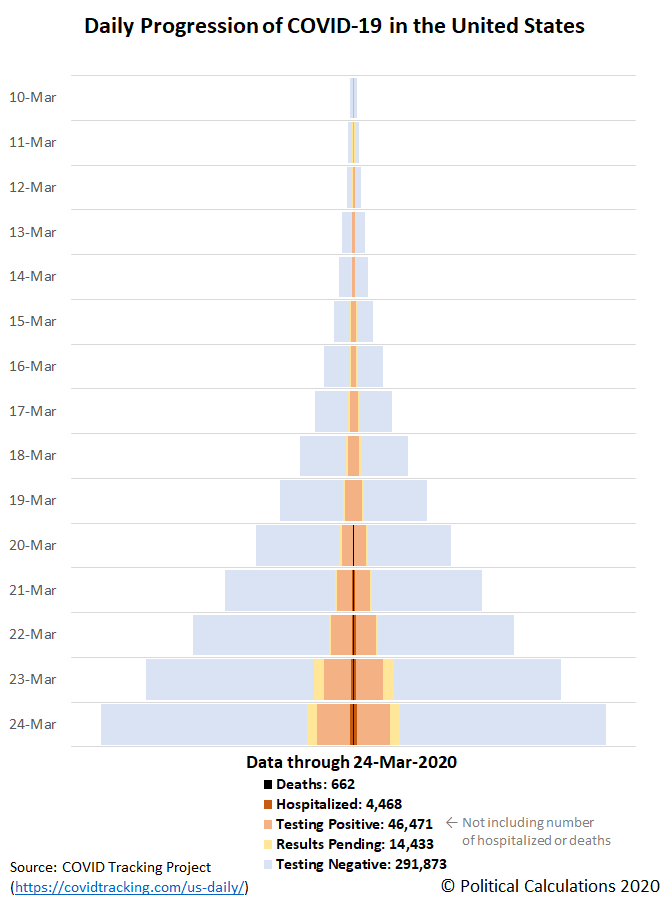 The data is cumulative, and through 24 March 2020, indicates the amount of testing is growing faster than the number of positive test results, hospitalizations, and deaths, which corrects one of the Centers for Disease Control and the Food and Drug Administration's most visible deficiencies in their management of the coronavirus epidemic within the United States. There are still local shortages in testing however, with much work to expand testing still remaining.

Speaking of local testing, here are the skyline tower charts comparing the relative speed of the detection of coronavirus infections in the 21 U.S. states and territories whose governors have ordered 'non-essential' businesses to shut down and for residents to stay-at-home either statewide or in highly populated regions, which we're calling the economic shutdown states. 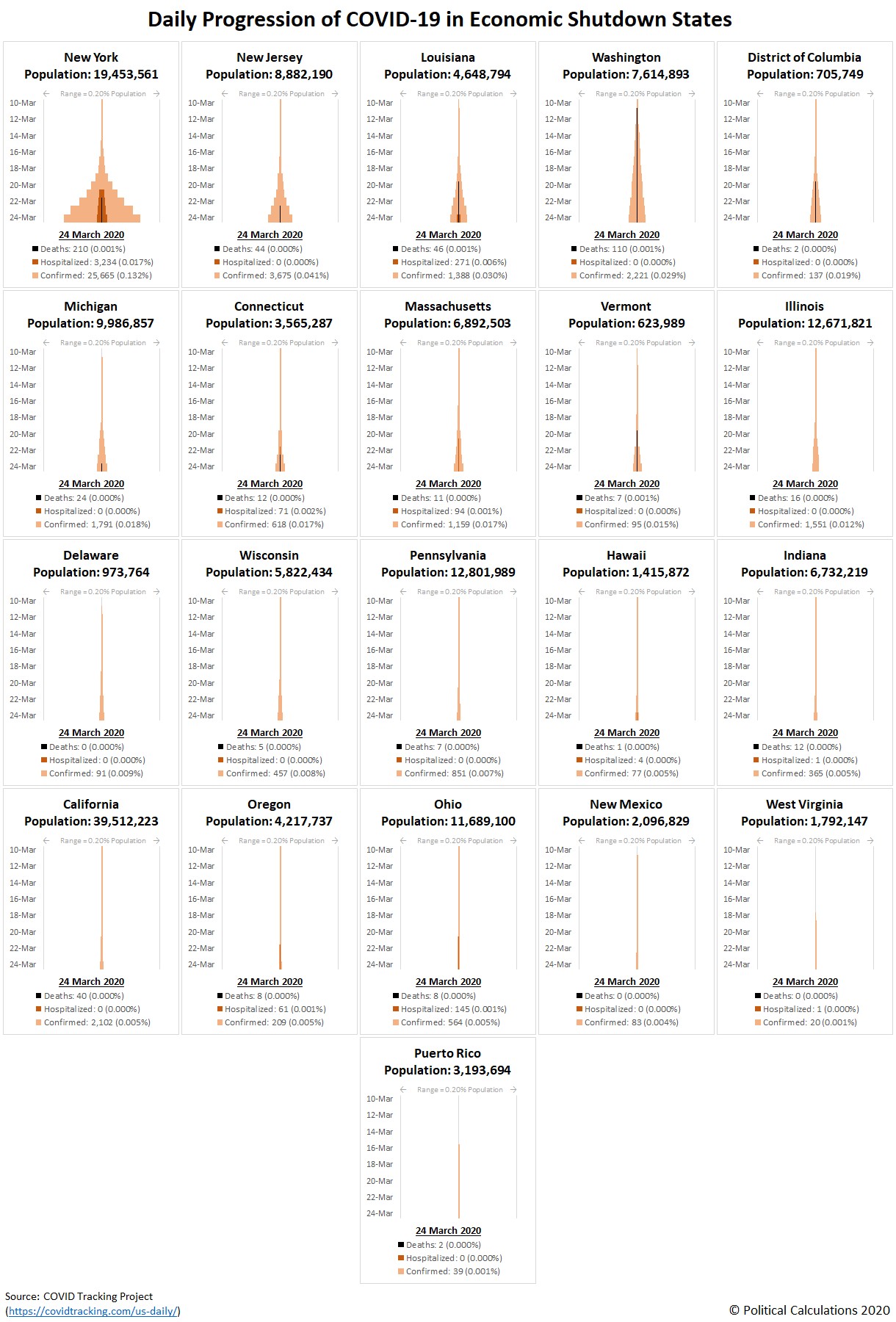 Here, although we're now using the COVID Tracking Project, we've opted to indicate just the number of confirmed cases, hospitalizations (where that data is available), and deaths attributed to the COVID-19 coronavirus infection.

We've ranked the states from highest to lowest as you move from left to right, top to bottom. New York looks to be the epicenter of the coronavirus epidemic, with little indication that the severe measures its governor has taken to date have been effective in slowing its progression. The remaining states show much slower rates of spread for the viral infection.

Together, the first 9 states and the District of Columbia rank among the 11 highest in the U.S. for their relative incidence of coronavirus infections within their populations. The other states and the territory of Puerto Rico are scattered among the remaining 50 states and territories, with Puerto Rico and West Virginia ranking 51st and 52nd respectfully. Of these states and territories, another common theme is the political affiliation of their governors or chief executive, where 16 are members of the Democrat party and 5 are Republican party members.

Colorado ranks 10th overall in the U.S. and its governor is a member of the Democrat party, but has so far bucked the trend of his governor peers in refraining from their practice of ordering residents to stay-at-home and to shut down businesses they arbitrarily judge to be 'non-essential'. Update 26 March 2020: Colorado's governor has imposed a statewide economy shutdown/stay-at-home order.

The biggest surprise is Texas, which ranks third lowest in the nation for its incidence of COVID-19 infections within its population, though Harris County, which is home to Houston, the fourth largest city in in the U.S., has just implemented an economic shut-down order.

From our perspective, given that the incidence of coronavirus infections tend to be highly concentrated, as New York City and other urban hotspots around the country have demonstrated, it makes much more sense for these orders to be implemented at the county or city level, rather than ordered at the state level, except perhaps for very low population or small area states and territories. They certainly would be much less disruptive to the portions of the population within larger states that are at considerably lesser risk.

Update 31 March 2020: Here's the latest update to all the charts presented above. Please scroll to the bottom of the article to either view or connect to more recent updates, if they've been posted.