Political Calculations
Unexpectedly Intriguing!
March 12, 2020
What Is Your Risk Of Exposure To Coronavirus In A Public Outing?

If you're going to a social event with lots of people, what is your risk of coming into contact with someone who has been infected by the coronavirus?

Alex Tabarrok posted the math that can provide insight into the answer to that question, which we'll convert into a tool you can use to run your own scenarios. Here's how he describes the math:

The mathematics for calculating the probability of exposure given the number of carriers in a population and group size aren’t difficult but they can be surprising. Even a low number of carriers can generate a relatively high probability for reasonably sized groups. For example, assume you run a firm of 1000 people in the San Francisco Bay Area (population 8 million.) Let’s suppose that there are just 500 carriers in the area. In this case, assuming random draws, the probability that at least one of your employees is a carrier is 6%. You can run your own calculations at Wolfram Alpha following this format:

where p is the population size, c is the number of carriers, g is the group size and the //N at the end isn’t a division but a command to Wolfram Alpha to give you a numerical answer.

We're huge fans of Wolfram Alpha, but since the data entry is a bit cumbersome. Hopefully, you'll find the user interface in the following tool to be a bit more friendly. If you're accessing this article on a site that republishes our RSS news feed, please click through to our site to access a working version.

One important thing to note is that the probability the tool calculates assumes that carriers are randomly distributed among the whole population. In practice, many will be concentrated within smaller groups of the population, where effective quarantine practices, or what the kids are calling "social distancing" these days, will reduce the probability of exposure.

Alex makes the key point for what we can learn from the math if you're thinking of going to a public event while the risk of viral infection remains high:

You can confirm that insight using the tool above, or if you prefer, here is Joshua Weitz' COVID-19 Event Risk Assessment Planner that presents the data visually: 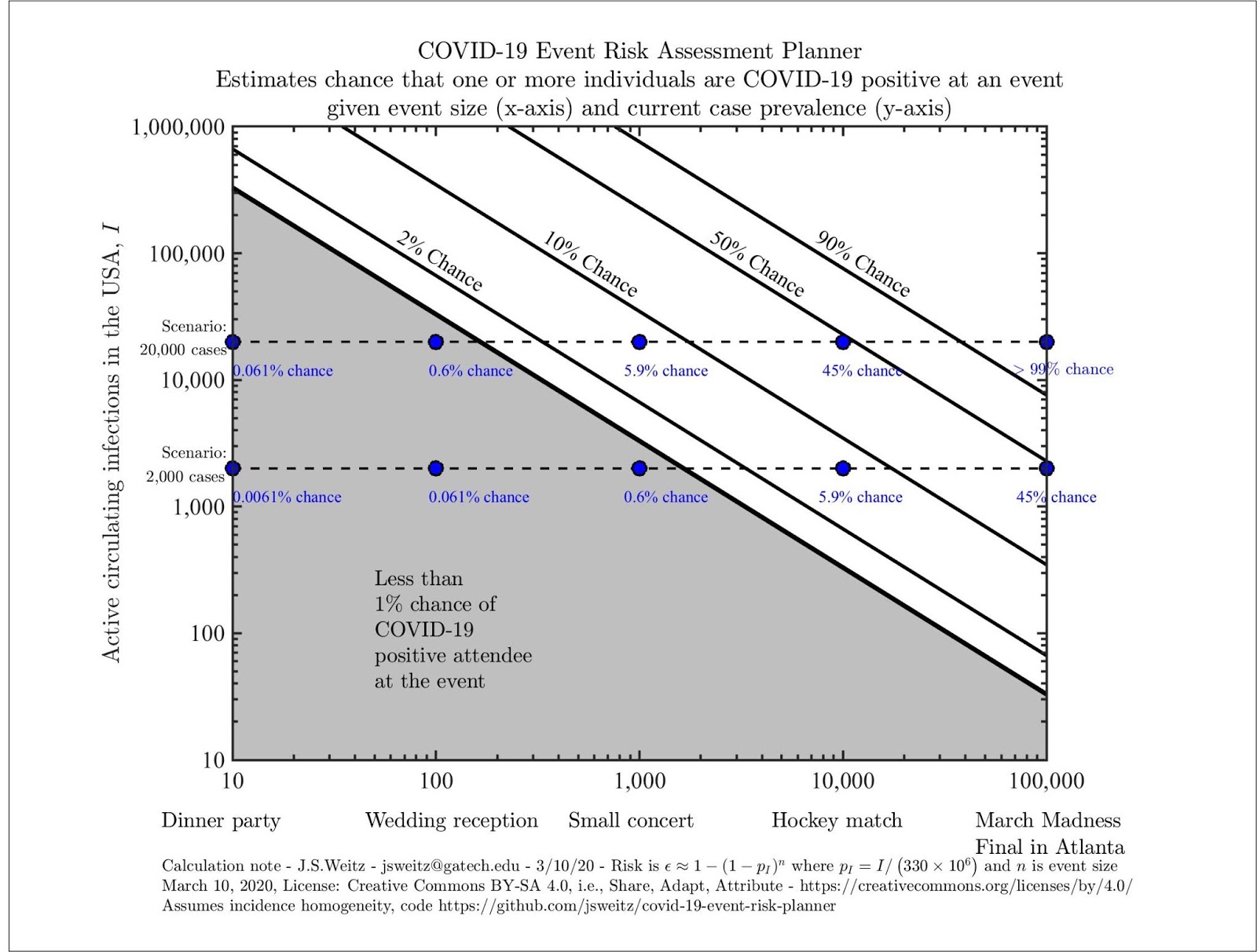 Numbers like these are why the NBA has suspended its season.