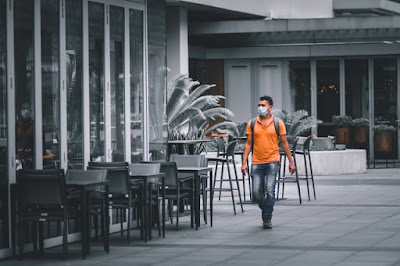 How much has Earth's GDP been whacked by the coronavirus pandemic?

In its World Economic Outlook projection for October 2019, the International Monetary Fund estimated World GDP would total $86,599 billion U.S. dollars in 2019. With an estimated world population of 7.605 billion people for 2019.

Let's assume that relationship applies to today's circumstances with the coronavirus, which has prompted a reduction in carbon dioxide emissions among the world's top emitting countries. Since December 2019, which we can call Month 0 for the economic impact related to the coronavirus pandemic that originated in China, the trailing twelve month average of atmospheric carbon dioxide has declined by 0.12 parts per million through March 2020, the equivalent to a reduction in emissions of 937.2 million metric tons, assuming no other changes.

We've next adapted a tool we previously built to do the ppm-to-metric-ton math to also estimate the corresponding change in GDP per capita that would coincide with such a change. If you're accessing this article on a site that republishes our RSS news feed, please click through to our site to access a working version of the modified tool.

Using the default numbers in our tool, we find a reduction in World GDP through March 2020 of $3,988 billion. Which is to say, it appears to have a comparatively small impact at all through this point in time for something on the scale of the world economy.

Then again, when using atmospheric carbon dioxide as a measurement tool, while we can get a sense of the direction the economy is taking relatively quickly, it can take a really long time for the full impact of an economic event to be measured at the remote Mauna Loa Observatory. Using the examples of Indonesian wildfires from 1997 and from 2015, it took nearly a year for the full effect of the emissions from those temporary events to be fully reflected in the observatory's atmospheric CO₂ concentration measurements, which means it is likely way too early to assess the impact of the coronavirus economic shutdowns taking place around the world, which are anywhere from a week to just a couple of months old depending upon when they were enacted at this point.

In any case, we now have a tool to generate the estimate for lost global GDP from the coronavirus pandemic. We only need to wait for the measurements. Assuming that this particular approach to answering the question is valid, which time will also tell.

Update 7 April 2020: We've corrected an error in the tool's output, where we've added boldface text to indicate where the correction has affected the analysis above.

Cederborg, Jenny and Snöbohm, Sara. Is there a relationship between economic growth and carbon dioxide emissions? Semantic Scholar.
[PDF Document]. 2016.