Political Calculations
Unexpectedly Intriguing!
16 June 2020
Is The Worst Behind Us For Coronavirus Recession Dividend Cuts?

The number of dividend cuts being announced each day in the U.S. stock market began to explode in response to the developing coronavirus recession on 16 March 2020. Three months later, there are signs the worst may now be behind investors.

The best evidence of that change in affairs may be seen in the following chart tracking the cumulative number of dividend cuts and omissions announced during 2020-Q2, where from Day 62 through Day 76 (1 June 2020 through 15 June 2020), the rate at which these dividend reductions and suspensions are being announced has considerably slowed from the torrid pace we were observing earlier in the quarter. 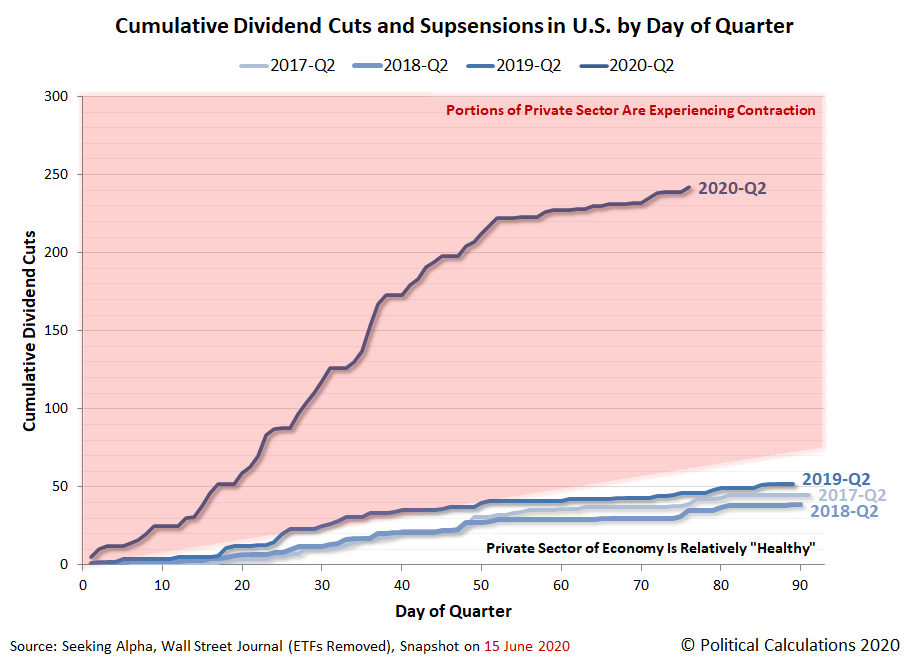 So far in the first half of June 2020, we've counted 15 firms announcing dividend cuts or suspensions in our sampling of dividend declarations, far fewer than we've seen during similarly long blocks of time during the past three months. Here is the full list of U.S. firms either announcing dividend cuts or suspending their dividends from our regular sampling of dividend declarations during the first half of June 2020.

A quick review of the types of firms announcing dividend cuts and suspensions reveals that more than half are Real Estate Investment Trusts (REITs). Firms in the oil and gas industry and in the financial service industry tied to take second place at two each, with single firm entries in three other industry sectors to round out the list. Overall, the breadth of negatively impacted industries in the first half of June 2020 is also the smallest we've seen over similar periods of time during the last three months.

Is the worst now behind us for coronavirus recession-related dividend cuts?

In the list of firms cutting or suspending dividends during the first half of June 2020 above, clicking the links for the publicly-traded company names will take you to our source for their dividend cut or suspension announcement. Clicking the ticker symbols will take you where you can find current price and other information related to the particular firm. Since our sources use automated systems to identify firms cutting or suspending their dividends, any errors in the list may be attributed to their methodology for detecting them. At some point, we'll discuss some of the more common errors we run into that arise from the automation in reporting, but that's still a discussion for a different day.

We also recognize the list includes a number of firms that pay variable dividends linked to their earnings and cash flows, which given the current market environment, is an irrelevant consideration that makes people who quibble over such trivia look incredibly foolish. In the current environment, the dividends for these firms are down because their operating environment has deteriorated since their last dividend distribution, just as it has for the firms that set their dividends independently of their earnings and cash flows who are also announcing dividend cuts and suspensions.