The impact of the coronavirus pandemic that began in China continues to take a toll on the world's economy.

We can estimate that impact using the trailing twelve month average of the year over year change in the atmospheric concentration of carbon dioxide measured at the remote Mauna Loa Observatory. Here, we find that the rate at which CO₂ is increasing in the Earth's air has fallen from a trailing year average of 2.91 parts per million in December 2019 to a preliminary estimate of 2.61 parts per million in July 2020.

That change can be seen in the latest update to a chart showing the history of this measure and the timing of major economic recessions in the world since January 1960. 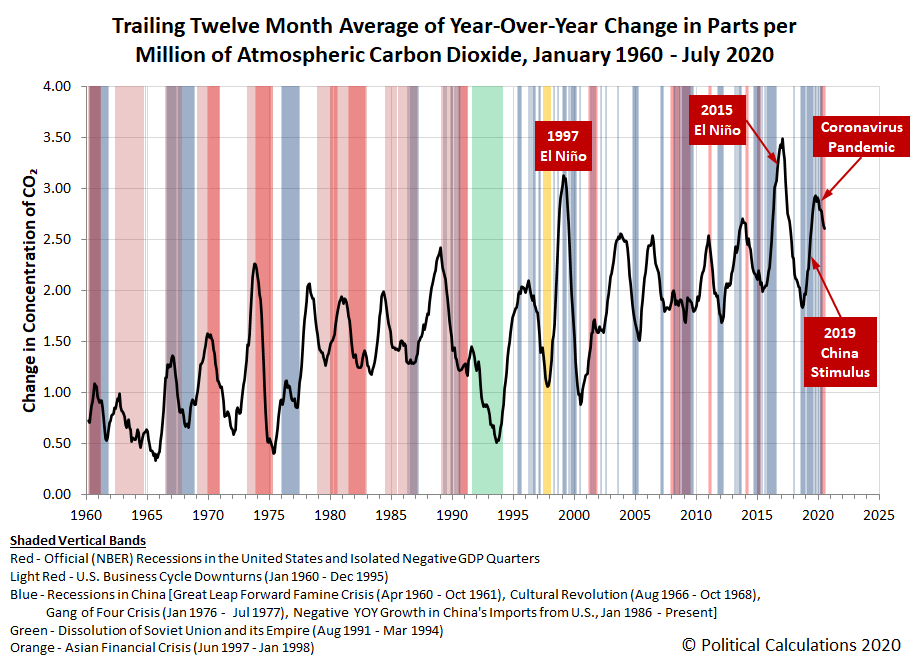 That decline of just 0.3 parts per million of carbon dioxide in the atmosphere translates to nearly $10 trillion reduction in the world's Gross Domestic Product. The default values in the following tool confirm the results of the math we have previously confirmed provides estimates of lost GDP in the right ballpark. If you're accessing this article on a site that republishes our RSS news feed, please click through to our site to access a working version of the tool.

With an estimated loss of $9.97 trillion worth of global GDP, the reduction in the pace at which the level of carbon dioxide is changing within the atmosphere represents approximately a 7.0% decline from the International Monetary Fund's purchasing power parity estimate of $142.0 trillion for 2019.

In early June 2020, the World Bank estimated the global coronavirus pandemic would shrink the world's economy by 5.2%, which works out to be a reduction of roughly $7.4 trillion worth of international GDP.

Both these figures are of a similar order of magnitude, so our estimate is still very consistent with those of established sources. And for what it's worth, the World Bank's estimate would be based on data through May 2020, while ours is based on data through July 2020. If you're looking for a single value that captures the most current, best single estimate available today, our estimated $10 trillion loss in world GDP since the SARS-CoV-2 coronavirus made its debut in Wuhan, China is a good number to reference.