The flow of trade between the U.S. and China in June 2020 shows continued signs of economic recovery following the negative impact of government-mandated lockdowns in both countries to address the coronavirus pandemic earlier in 2020.

The rebound of trade, as measured by the combined value of trade in goods and services between the two countries, showed a small month-over-month gains in June 2020, which rose to $46.9 billion from May 2020's $46.2 billion. Compared to a year earlier however, June 2020's level was $1.2 billion below June 2019's, indicating the year-over-year gap is closing. 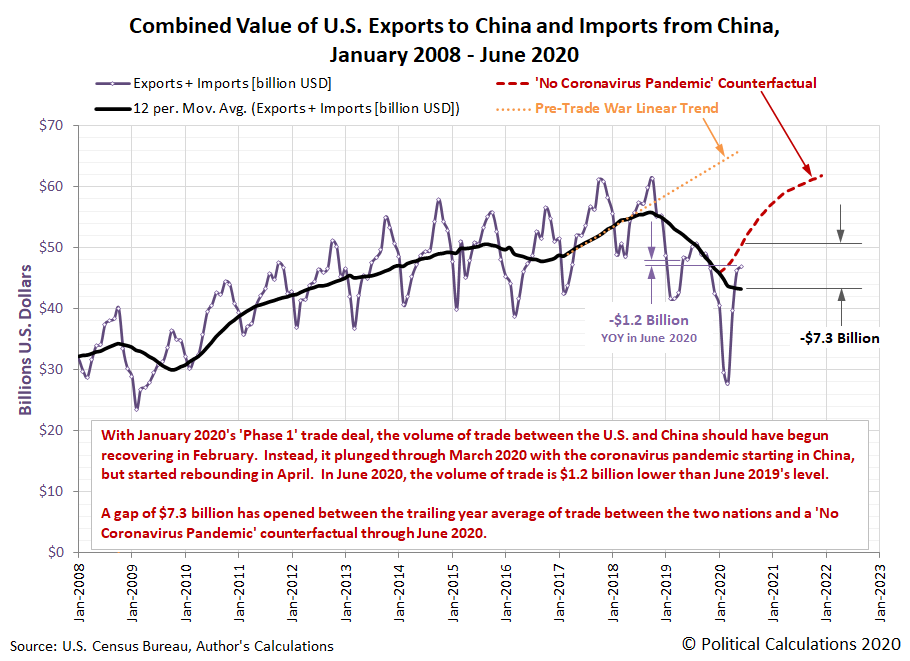 Since the end of 2019, a $7.3 billion gap has opened up between the trailing twelve month average of the value of U.S.-China trade and a counterfactual based on a reasonable estimate of what that trade would look like following January 2020's 'Phase 1' trade deal between the two nations. This measure continued trending downward in June 2020, although at a slower pace than what was recorded when the volume of trade between the U.S. and China bottomed in March 2020.

June 2020 saw a delayed first wave of coronavirus infections spread within U.S. states that had previously avoided large numbers of cases earlier in 2020, which has prompted a number of jurisdictions to re-impose some restrictions on businesses that had previously been lifted in May 2020. These measures may be expected to suppress the post-coronavirus economic recovery in the U.S., which will modestly affect the volume of goods exported from China to the U.S.

Beyond that however, there is mounting evidence China's government is shirking the commitments to purchase U.S. goods it made in the 'Phase 1' trade deal, which is also contributing to the slower economic recovery from the pandemic.

Under the Phase 1 trade deal signed in January, China had pledged to boost purchases of U.S. goods by some $200 billion over 2017 levels, including agricultural and manufactured products, energy and services.

Beijing has bought only 5% of the energy products needed to meet the Phase 1 first year goal of $25.3 billion.

In August 2020, Chinese and U.S. trade officials will be meeting to discuss the trade environment between the two countries.